where IS and n are scale factors, and kT/q (˜ 25.4 mV at room temperature) is the so called thermal voltage VT. 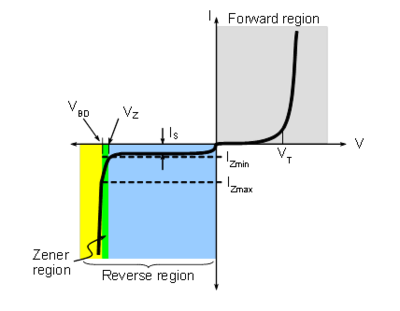 1. The reverse breakdown voltage of a Schottky barrier diode is lower and the reverse leakage current higher than those of a PN junction diode made using the same resistivity semiconductor material.
2. The forward voltage at a specific forward current is also lower for a Schottky barrier diode than for a PN junction diode. For example, at 2 mA forward bias current a low barrier silicon Schottky diode will have a forward voltage of ~0.3 volts while a silicon PN junction diode will have a voltage of ~0.7 volts. This lower forward voltage drop can cut the power dissipated in the diode by more than one half. This power savings can be very significant when the diodes need to carry large forward currents. The current vs. voltage (I/V) relationship for a Schottky barrier diode is given by the following equation known as the Richardson equation. The primary difference from the conventional diode equation is in IS with the addition of the modified Richardson constant A*.

The channel A generator should be configured for a 100 Hz triangle wave with 3 volt Max and 0 volt Min. The channel A current trace is used to measure the current in the resistor (and diode). The scope channel B is used to measure the voltage across the diode. The vertical range should be setup with channel A at 5mA per division and channel B set also at 0.2V per division. The current flowing through the diode, ID, is also the voltage measured across the resistor (100 Ω in this example). The Math trace that is the difference of CA-V - CB-V divided by the resistor is also the current. Use the XY display mode to plot the voltage across the diode (channel B-V) on the X axis vs. the current in the diode (CA-I) on the Y axis.

Load the captured data for each type of diode into a data analysis software program like MATLAB or a spreadsheet (Excel) and calculate the diode current ID. Plot the current vs. the forward bias voltage across the diode. The diode voltage, current relationship should be logarithmic. If plotted on log scale the line should be straight.

To measure the reverse breakdown voltage of your Zener diode we need to produce a voltage difference larger than the breakdown voltage of the 6.2 V 1N4735 diode. The ADALM1000 hardware can only produce (and measure) voltages up to the 5 V maximum. We can add an external negative voltage source to combine with the positive internal voltage to produce a total voltage high enough for this experiment. The simplest way is to add a fixed negative voltage from an external battery (3 V) as shown in figure 5. By using different numbers of 1.5 V cells, negative voltages of -1.5, -3 and -4.5 are possible. The total reverse voltage applied to the Zener diode will be this negative voltage subtracted from the positive voltage generated by AWG channel A.

The channel A generator should be configured for a 100 Hz triangle wave with 3 volt Max and 0 volt Min such that it swings from 0 volts to +3 volt. This swing added to the -3 V offset from the external battery should be enough larger than the breakdown voltage of your 1N5230 4.7 volt zener. Be sure to connect the external battery before taking your measurements.

Load the captured data for each type of diode into a data analysis software program like MATLAB or a spreadsheet (Excel) and calculate the diode current ID. Be sure to add the 3 volt offset to the measurements for channel B to obtain the true voltage across the zener diode. You should probably measure the actual battery voltage for accurate measurements of the breakdown voltage. Plot the current vs. the calculated reverse bias voltage across the diode.

What is the slope (effective resistance) of the curve above the breakdown voltage?

How much does the voltage change as the current changes from 100uA to 10 mA?