The object of this activity is to explore an inductor based circuit which can produce an output voltage which is higher than the supplied voltage. This class of circuits are referred to as DC to DC converters or boost regulators.

The circuits used in this Lab activity while generally low current can produce voltages beyond the 0 to 5 V analog input range of the ALM1000. Input voltage divider techniques as discussed in the document on ALM1000 analog inputs will be required. Refer to the document and construct and use input dividers before preforming any of these experiments with the ALM1000.

When the current flowing in an inductor is quickly interrupted a large voltage spike is observed across the inductor. This large voltage spike can in fact be useful in some cases. One example is the DC to DC boost converter, which is a circuit that can create a larger DC voltage from a smaller one with very high efficiency. The basic idea is to combine an inductive spike generator with a rectifier circuit, as shown in figure 1. Whenever the transistor is abruptly turned off the voltage at the drain spikes up, the diode D1 is forward biased and current will flow from the inductor to charge up the high capacitance storage capacitor C2. When the drain voltage subsequently drops below the voltage on the capacitor, the diode is reverse biased and the output voltage remains constant. Just as in the chapter on AC power supplies, the output capacitor must be sized appropriately to minimize the ripple relating to the current flowing in the load. We will just use a small capacitor here and therefore the circuit will not be able to source a large output current.

Build the circuit in figure 1 on your solder-less breadboard. Note that in this inductor based DC to DC converter the spikes of current needed may exceed the limits of the onboard +5V supply causing it to shut down. You should use a standalone wall powered bench supply or batteries. You can use a 1N4001 or a 1N3064 for the rectifier diode. Start with a load resistance of 100 kΩ and a switching frequency of 2 kHz which can be supplied by the channel A voltage generator CA-V. What is the DC voltage of the “boosted” output? Record the value for your lab report.

Now increase the frequency to 4, 6 and 8 KHz. Measure and record the output voltage again. Explain why it has changed? One advantage we have here is that we can control the time period between the peaks of the signal going into the rectifier; in the power supply lab, we were stuck with a 60 Hz source.

Next decrease the load resistance to 10 kΩ and again measure and record the output voltage.

Clearly what is needed if we want a constant output voltage is some active regulation to keep the voltage constant when the load resistance changes. A larger output capacitance to filter out the ripple would be a good addition as well. There are a few simple ways to implement the active regulation, and indeed there are a number of other interesting design considerations for DC to DC boost converters that you can read about if you are interested, but our goal here is really just to illustrate the concept, so the circuit shown in figure 1 is not optimal in any practical sense. With more careful design, boost converters can drive a much larger output current at very high conversion efficiency (very little wasted power).

Note that the DC to DC converter in figure 1 requires a square-wave generator to drive it. Ordinarily this square-wave generator is part of the circuit and also powered by the input supply, so that the conversion circuit is self-contained. A place to perhaps obtain a gated oscillator integrated circuit with a built in NMOS FET switch is a solar powered garden stake light such as shown in figure 2: 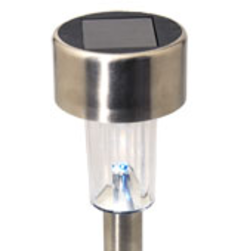 Inside these lights is a DC-DC boost LED diver integrated circuit which increases the voltage of a 1.2 V rechargeable AAA battery to the approximately 3 V needed to dive the white LED. Many versions contain a four pin voltage boosting integrated circuit marked YX8018. Some other versions contain a functionally equivalent 4 pin IC mounted under black epoxy directly on the PC board. Either version can be used in this Lab. The complete circuit is shown in figure 3. 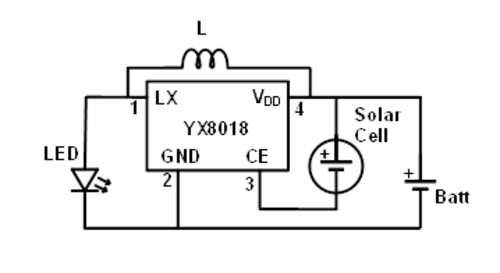 The YX8018 comes in a 4 pin transistor style TO-94 package and the pin configuration and block diagram is shown in figure 4. A low voltage near the negative battery voltage (GND) on the CE input of the YX8018 gates off the oscillator. A high voltage near the positive battery voltage (VDD) conversely gates the oscillator on. Other versions of these LED drivers may work opposite so be sure to check your particular IC confirm how the CE control input operates.

The gated oscillator in the YX8018 runs at approximately 200 KHz driving an open drain NMOS switch ( output on LX pin1 ). The circuit pulses the inductor to step up the voltage to drive the LED.

To reduce the component count the application of the YX8108 chip is rather ingenious. They use the internal ESD diode between the CE ( chip enable ) input and ground for charging the NiCd cell from the solar panel, but also use the voltage ( or lack thereof ) from the solar panel to detect when it is dark enough to turn the LED on. The CE input includes a small pull-up current (30 uA with 1.25 volts on VDD). This small current will pull pin 3 high gating on the oscillator if the solar panel is not generating more than 30 uA of current.

We can learn more about inductor based DC-DC Converters by building various configurations around the YX8018 chip. Some of the following circuits are from the figures in the datasheet of the YX8018, others are extensions based on conventional DC-DC converter techniques. Note that in most of these examples we leave the CE pin floating for continuous operation. 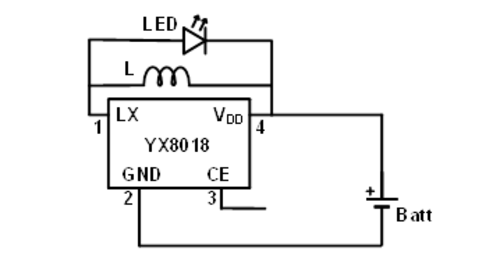 The basic configurations in figures 3 and 5 drive the LED with pulses of current at the oscillator frequency. This is fine because the frequency is way above anything the eye can perceive as flicker. These pulses can be rectified and filtered into a DC voltage to drive the LED as shown in figure 6. Rectifying diode D1 can be a standard diode such as a 1N914 but a more efficient choice for these low voltages would be a Schottky diode. At these high frequencies, filter capacitor C1 does not need to be very large, a 0.1uF or 1.0uF value will work well.

Applying a pulse width modulated square wave using one of the generator output channels from the ALM1000 to drive the CE input could serve as a way to change the brightness of the LED.

By adding another diode and capacitor negative output voltages can be generated as shown in figure 7. A negative voltage is not necessarily needed to drive the LED. This is more a demonstration of how DC-DC converters can also generate negative voltages from positive voltages. Capacitor C1 and diode D1 level shift the positive peaks of the voltage waveform at pin 1 and clamp the voltage seen at the junction of D1 and D2 to a diode above ground. This now negative going waveform is rectified by D2and filtered by C2. Again a more efficient design would be to use Schottky diodes. 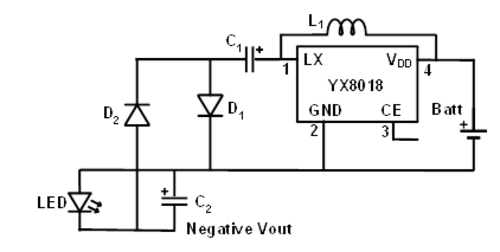 The YX8018 datasheet includes a table listing the output current at a VDD of 1.25 V for different inductor values, reproduced here.

Another option is to replace the simple inductor with a transformer. The Coilcraft Hexapath 6 winding HPH1-1400L has a winding inductance of 200 uH so it falls in the range of values listed in the table. In figure 6 the HPH1-1400L is configured as a 1:5 step up transformer and the circuit can deliver 1 mA of current to a 15 KΩ load resistor ( or 15 V DC ).

Adding a voltage comparator to drive the CE input with feedback from the boosted output adds regulation to the circuit. A regulation scheme which includes a fixed voltage reference and an error amplifier is more complex but a simpler version can be made by adding just a couple of resistors and an NPN transistor to figure 6 which demonstrates the concept. Figure 9 shows the additional circuitry.

The regulated output voltage will be N times the VBE of Q1 (a 2N3904 works well). The multiplication factor N is set by the resistor divider ratio. Using the 10 K? potentiometer and the resistor values shown the output should be adjustable to a range of voltages around +5 V. The load regulation is fairly good up to the maximum current based on the chosen value for L1 however, the temperature stability will be rather poor because of the strong negative TC of VBE.