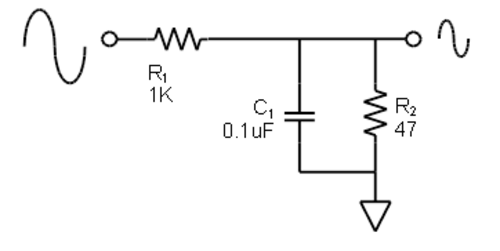 Build the NMOS differential pair test circuit shown in figure 2. The connections to the ALM1000 are as indicated in the green boxes. M1 and M2 should be selected from your available transistors with the best matching of VTH. The sources of M1 and M2 share a common connection with one end of R3. The other end of R3is connected to ground (0V) and supplies the tail current. The gate of M1 is connected to the output of the first arbitrary waveform generator, CH A, and the gate of M2 is connected to the output of the second arbitrary waveform generator, CH B, through the 20:1 attenuator network. The two drain load resistors R1 and R2 connect between the drains respectively of M1 and M2 and the positive supply +5V. The two Split I/O inputs AIN and BIN are used to measure the differential output as seen across the two 10K load resistors. 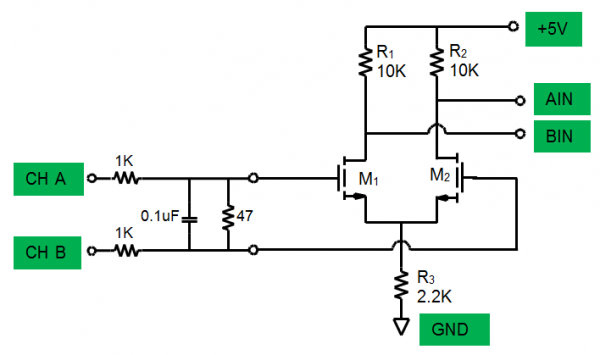 Both channels A and B should be set to the SVMI Split I/O mode. Both generators should be configured for a 500 Hz sine wave, with Channel A phase set to 90 degrees and Channel B set to 270 degrees ( 180 degrees difference ). The resistor dividers will reduce the signal amplitude seen at the gate of M1with respect to the gate of M2to slightly less than 200 mV. Channel CA-In and CB-In (Hi-Z inputs) should be connected to display the voltage at the drains of M1 and M2. To also display the AWG channel A and B output waveforms we can use the X Math and Y Math traces. From the Curves drop down menu select CA-V, CB-V, X Math and Y Math traces. Open the Math controls screen and enter AWGAwaveform[t] in the X Math Formula entry and AWGBwaveform[t] in the Y Math Formula entry. The Units can be V and the X Axis can be V-A, the Y Axis can be V-B.

By changing the value of R3, you should explore the effects of the level of the tail current on the gain of the circuit and the linear input range and the shape of the nonlinear fall off in the gain as the circuit saturates. With minor additions to the basic circuit, such as emitter degeneration resistors, you should also explore techniques to extend and linearize the range of the input swing and the effects on circuit gain.

The use of a simple resistor as the tail current has limitations. You should explore ways to construct a current source to bias the diff pair. These could be made with a couple of additional transistors and resistors as in the stabilized current source from Activity 8M. 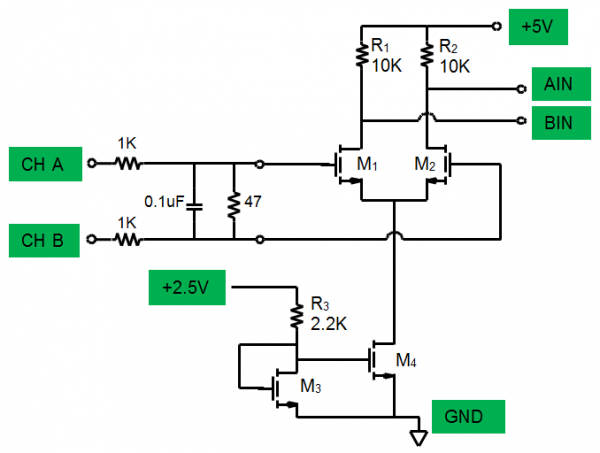 Common mode rejection is a key aspect of the differential amplifier. CMR can be measured by connecting the gate of both transistors M1 and M2 to the same input source. You should generate plots showing the differential output for both the resistively biased and current source biased differential pair as the common mode voltage is swept + and - 500mV around 2.5V. 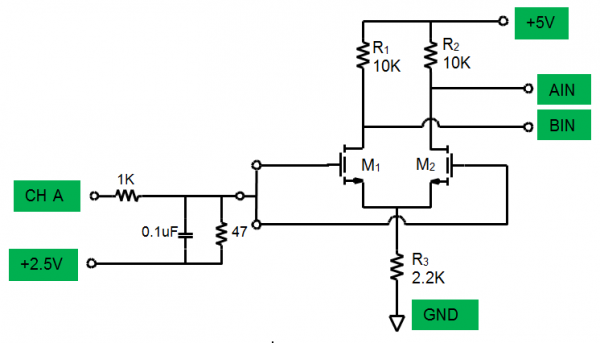 Would you characterize this transistor amplifier as being inverting or non-inverting to outputs at each of the drain terminals with the gate terminal of transistor M1 being considered the plus (non-inverting) input? Explain your answer.