Transformers have three uses or, more precisely, can provide three types of transformation: Voltage, Current and Impedance. Of course, these are related, but, ideally, they have different frequency dependence. In this lab activity the transformer will be explored as a means to scale or transform (AC) current.

The ALM1000's SMU channels can measure DC currents from -200mA to +200mA. Because of the 100 KSPS sampling rate it can actually measure AC currents as well. But the current to be measured has to be flowing into or out of the SMU channel. This limits the range of voltages that the current must be “referenced” to, 0 to +5V. To measure current over a wider range of voltages a current shunt monitor IC like the AD8210 from the ADALP2000 Analog Parts kit can be used.

The ALM1000 SMU channels use this same integrated circuit to measure the current. The operating input common-mode voltage range of the AD8210 is −2 V to +65 V with respect to the ground pin of the IC. A larger voltage range but still not enough to safely measure the current of a household appliance or lighting fixture operating from 120 V AC. So what can we use to do that? Enter the Current Sense Transformer, CST.

Transformers have three uses or, more precisely, can provide three types of transformation: Voltage, Current and Impedance. Of course, these are related, but, ideally, they have different frequency dependence. Current transformers only work when the secondary is behaving like an inductor, with little loss.

The current sense transformer is specifically optimized or designed to produce an alternating current in the secondary winding which is proportional to the alternating current being “sensed” or measured in the primary winding. Like any transformer, current transformers isolate the measuring of currents in high voltage circuits to a much lower voltage and provide a convenient way of safely monitoring the actual electrical current flowing in a high voltage AC power line. In our case the monitoring equipment could be the SMU of the ALM1000.

This primary winding can be of either a single flat turn, a coil of heavy duty wire wrapped around the core or just a wire inserted through a central hole like that shown in the photo of a clamp-on current probe transformer, (model LCTC-0250) figure 1. With this current “probe” the jaws open so that it can be clamped around the conductor carrying the current to be measured without having to disconnect the conductor. Current probes such as this are designed for use in 50/60 Hz AC power applications. The LCTC-0250 probe has a current measuring range up to 100 Amps and a built-in current to voltage (burden) resistor so the output voltage is specified as 15mV/A. 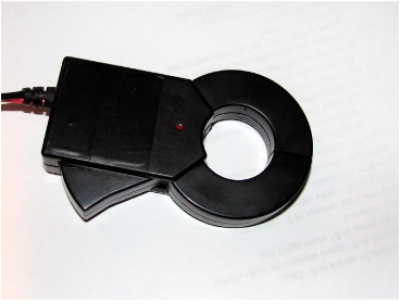 Ideally we want the primary and secondary currents of a current transformer to be in phase. In practice, this is not possible, but, at normal power line frequencies, phase shifts of a few tenths of a degree are achievable, at high frequencies CTs may have phase shifts up to six degrees. For average and RMS current measurements the phase shift does not factor in the measurement as ammeters only display the magnitude of the current. However, for power, energy, and power factor (real power vs reactive power) measurements, phase shift produces errors. For power and energy measurements, the errors can be considered to be negligible at unity power factor but become more significant as the power factor approaches zero. At zero power-factor, any indicated power is entirely due to the current transformer's phase error. The introduction of electronic power and energy meters has allowed current phase error to be calibrated out.

We can use the 6 winding coils from the ADALP2000 Parts kit to examine the basic concepts of using a transformer as a current sensor. Normally we would like the turns ratio to be some large number like 100 or 200 but we can still see the relationship of the primary and secondary current with a smaller ratio like 1:5 available using these 6 winding coils.

Wire the HPH1-1400L 6 winding coil as a 1:5 transformer as shown in figure 2 taking careful note of the winding polarity indicated by the dots. The single winding primary winding is driven by AWG channel A through the 6.2 Ω power resistor, RL. SMU channel B is used as a ground referenced ammeter to load the five winding secondary while measuring the current. 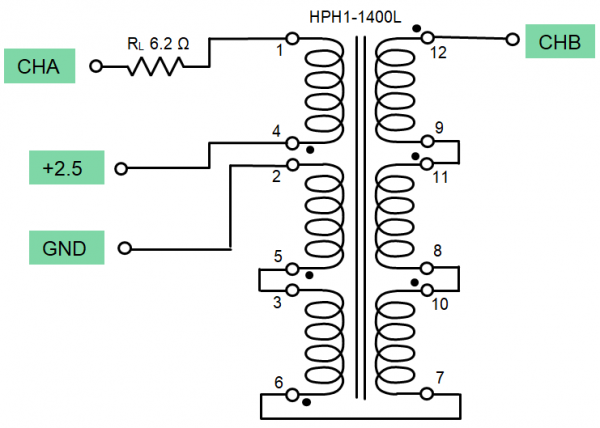 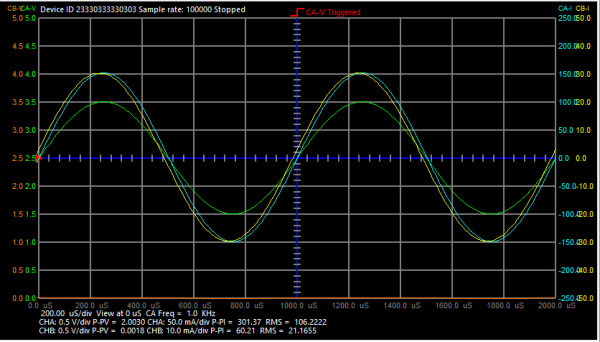 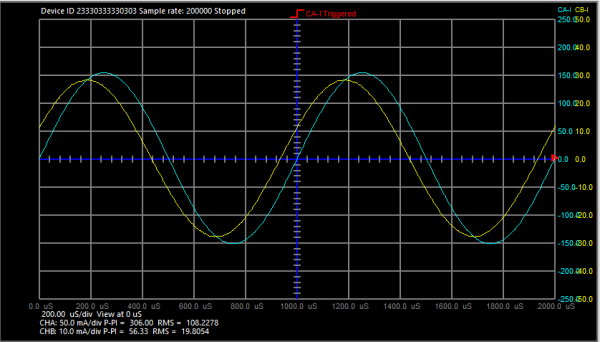 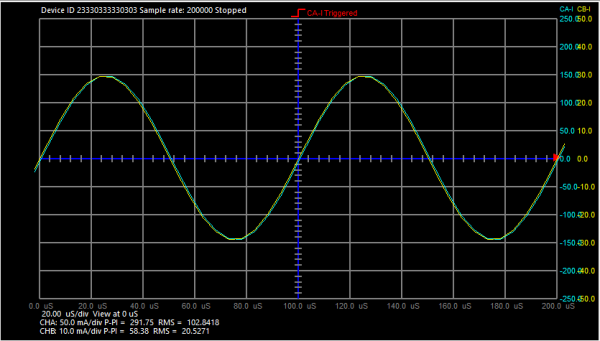 How does the coil inductance factor into the phase error between the primary and secondary currents?

We can potentially make a higher turns ratio CT by wrapping a single turn of wire around one of the inductors from the Parts Kit. In figure 6 we show the LTspice simulation schematic of this using a 10 mH coil as the secondary winding. In the simulation we can adjust the primary inductance and the mutual inductance coupling factor to model the real circuit from figure 7

In this circuit we use the op-amp to create a virtual short across the secondary coil and us a relatively higher value resistor in the feedback of the amplifier to convert the coil current into a voltage. Other inductors from the Parts Kit can be used to produce other possible turns ratios.

Many manufacturers make a range of current sense inductors that are a toroidal coil with a hole in the center that the user passes a wire (or loops of wire) through to sense the AC current, figure A1. Depending on the particular model and the specification these types of current transformers are designed for use in switch mode power supply control systems and operate over a frequency range from 20 kHz to 200 kHz. The PE-51718 center tapped 100 turn 20 mH version is shown. The size, excluding the leads, is 20mm tall x 11mm wide x 10mm deep which is small enough to fit on a solder-less breadboard.

The nice thing about using coil like this as a sense transformer is that you can choose any number of turns you want for the primary. Up to when the center hole is filled based on the gauge of the wire used. 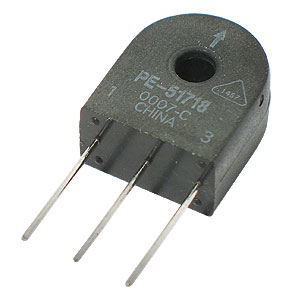 A current transformer with a built-in primary winding from CoilCraft is shown in figure A2. Since it is totally encapsulated, we can't tell how it is constructed. The design frequency range for this 200:1, 80 mH example is from 1 KHz to 1 MHz. 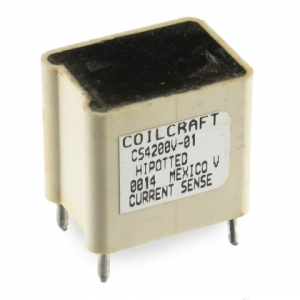 In figure A3 we have a surface mount current sense transformer from Würth Elektronik. In this example the primary winding is simply the wide metal strap that goes up and around the central secondary winding. The manufacturer specifies the inductance for this 200:1, 20 mH example at 10 KHz so it probably is also not designed for lower frequency power line applications. 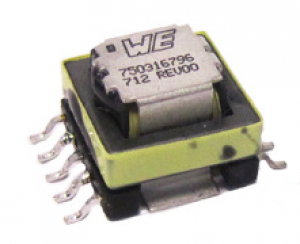 To test these current transformers the ALM1000 and the test circuit shown in figure A4. A 4 V peak-peak sine wave signal is generated by the channel A AWG. The signal is then AC coupled through a large capacitor to the 10 ohm load resistor which converts the voltage into a 400 mA peak to peak current. The current is sensed by the primary winding which is connected to ground. On the secondary side the 100 ohm burden resistor is connected across the coil winding and the resulting voltage is measured by channel B in Hi-Z mode. The other end of the coil is referenced to the fixed 2.5 V rail to center it in channel B's input range.

For the clamp-on probe and the PE coil one of the longer wire jumpers from the Analog Parts kit is inserted through the center hole to use as the primary.

The input frequency is swept from 20 Hz to 1 KHz in all the following tests. The first bode plot is for the LCTC clamp probe with a single wire through the clamp. Remember that the clamp has a built-in burden so the 100 ohm external resistor was not included for this test case. The magnitude response is very flat, within a dB down to 20 Hz. 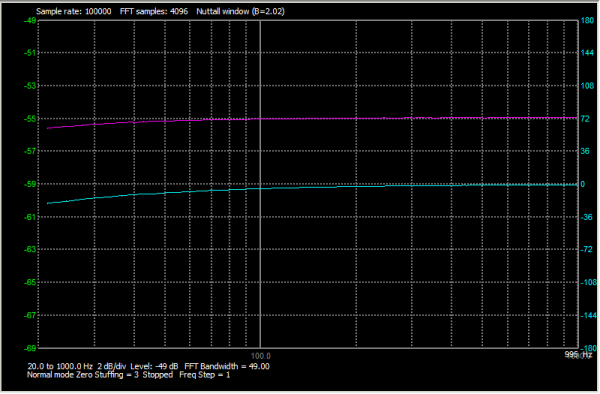 Next up is the PE-51718. As we see the response below 1 KHz is not at all flat which is to be expected given the 20 KHz minimum frequency specification. The lighter set of curves are for one wire as primary and the darker set is for 4 turns as the primary. 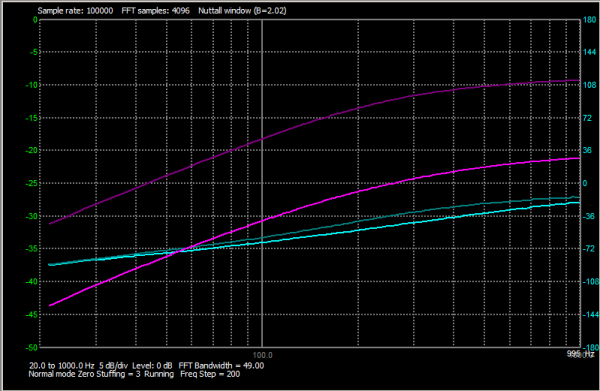 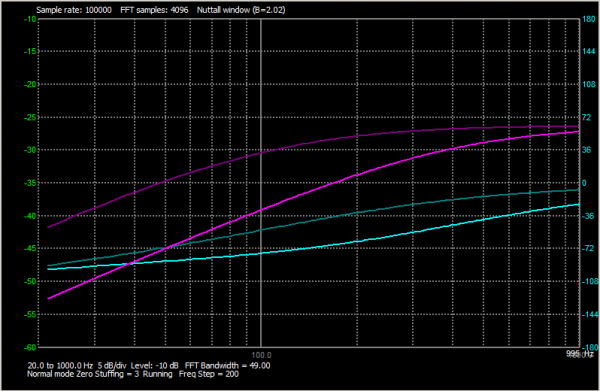 Electronic Burden, I to V converter

One way to improve the frequency response of any current transformer is to replace the resistive burden with an electronic solution, i.e. an op-amp I to V conversion circuit. The single supply rail-rail AD8541 CMOS op-amp is used as an I to V converter as shown in figure A8. The virtual ground at the summing junction, pin 2, presents a very low impedance load on the secondary. The 1K feedback resistor converts the current into a voltage that is measured by channel B at pin 6.

Figure A8, Op-amp I to V converter circuit

To test the frequency response using the op-amp the CoilCraft CS4200V-01 (dark trace) and Würth 750316796 (light trace) are again compared in figure A9. Note the vertical scale is now 3 dB/div. There is a huge improvement in the flatness of the response compared to figure A7 with less than a dB of roll off at 60 Hz. The CoilCraft response is now about as flat as the LCTC current probe in figure A5. 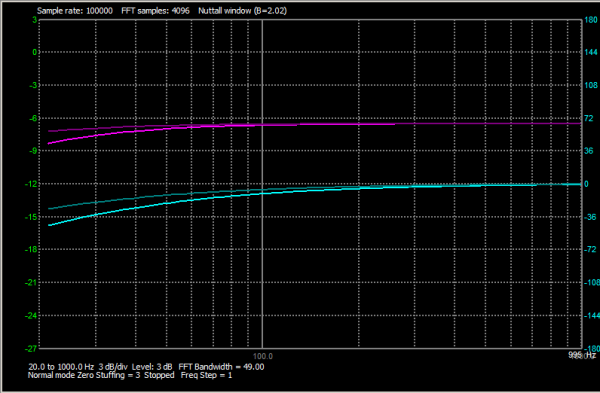 As a real world example let's use the model LCTC-0250 clamp-on current sensor we saw in the first figure and the M1k to measure the current waveform of an LED Holiday light string. The LCTC-0250 probe has a built-in current to voltage (burden) resistor so the output voltage is specified as 15mV/A. The string consists of 35 white LEDs in series. About a foot of the wire was untwisted and one leg was wrapped about 5 times around the clamp. The sensitivity should be about 75 mV/A ( 5 * 15 mV/A ).

The probe is connected directly to the input of an M1k without any additional amplification or filtering. As you can see in figure A10 the current is simple 1/2 wave rectification and the peak current is between 35 and 45 mA. Hard to see exactly with the noise and the signal is too small to trigger on properly and apply trace averaging. 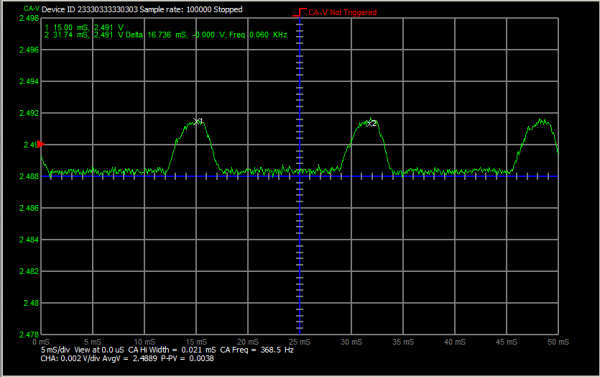 Figure A10, Current waveform without any signal processing

By applying some mathematical wizardry we are able to clean up the noise and make the “signal” big enough (by 10X) to trigger on and use trace averaging. A simple 20 tap box car digital filter with an overall gain of 10 is applied to the captured waveform trace and trace averaging is used (set to average 8). The waveform is nice and clean now and the p-p current is 42 mA. 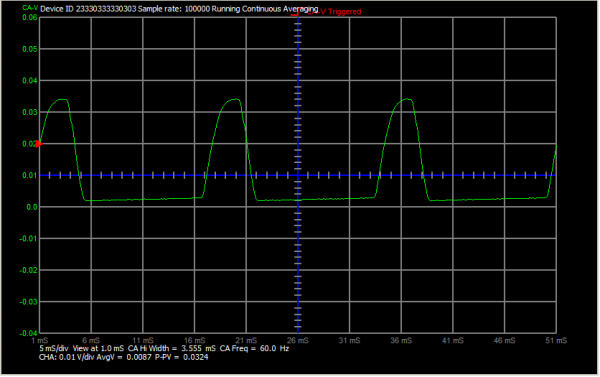