Build the simple half wave rectifier circuit shown in figure 1 on your solder-less breadboard. An active gate drive circuit, such as shown in the figure, uses an op-amp (AD8541/2) to sense when the AC input waveform, from the output of the channel A voltage generator, CA-V is more positive than the output voltage, VOUT, and turn on the PMOS transistor, M1. The circuit provides active rectification for AC voltages as low as the minimum power supply voltage for the op-amp (2.7 volts for the AD8541/2) or the gate threshold voltage of the PMOS device (typically 1.5 V for the ZVP2110A). At lower input voltages, the MOSFET's back-gate to drain diode takes over as an ordinary diode rectifier. 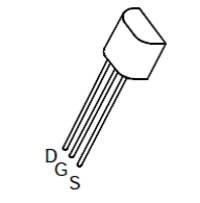 where: (voltages with respect to ground)
VGATE is the voltage at the gate of M1
VIN is the AC input voltage
VOUT is the output voltage at C1and RL

If the value of R2 is 21 times larger in value than R1, (1MΩ / 47KΩ), a +75 mV drop across the M1's drain-to-source voltage, VDS, is sufficient to turn on the PMOS trnasistor with a threshold voltage of -1.5 V. Larger ratios of R2 to R1 could be used to either lower the input to output voltage drop or to accommodate transistors with higher threshold voltages.

The op amp is powered from the output smoothing capacitor C1 so no additional power supply is necessary. There are certain requirements for the op-amp chosen for this circuit. The amplifier must have rail-to-rail inputs and outputs and demonstrate no phase inversion of the gain when operated near the power supply rails. The op amp's bandwidth limits the frequency response of the circuit. Low supply current op amps are often chosen for this application for efficiency which generally results in low bandwidths and slew rates. At higher AC input frequencies, perhaps higher than 500 Hz, the amplifier's gain will begin to decline. The AD8541/2 single supply CMOS op amp has all of these requirements and a small supply current of only 45 uA.

AWG CHA is connected as VIN and should be configured as a sine wave with Max set to 5.0 and Min set to 0 and a frequency of 100 Hz. The channel B input, in Hi-Z mode, is used to monitor various points around the circuit such as VIN, VOUT, and the gate of M1. The CHA current trace can be used to monitor the input current waveform.

Use the CHA and CHB traces to monitor the input AC waveform at VIN and the DC output wave form at VOUT. VOUT should be very close to the peak value of VIN. Now replace the large 220 uF capacitor with the much smaller 4.7 uF capacitor. Observe the change in the waveform seen at VOUT. When is VOUT closest in value to VIN ? Compare that interval of the AC input cycle with the voltage at the gate of transistor M1.

Change the Max amplitude of the AC input waveform. What is the minimum peak value of the AC input where the PMOS transistor is still actively rectifying the input, i.e. the VGS is greater than the threshold voltage and the device is turned on? What determines this minimum voltage?

Try different frequencies for the AC input. How does the frequency affect the peak value and the width of the current pulse in RS?

Active Rectifier based on transistors

The op-amp that is being used in the first example circuit to compare the input and output sides of the rectifier can replaced by discrete transistors as shown in this next example circuit, figure 3. The simple diode based half wave rectifier circuit is shown for comparison. Two PNP transistors are configured as a current mirror but with the PMOS “rectifier” transistor between the emitters. As we know from our study of the current mirror, the current in the two transistors will be equal if their VBE voltages are the same. If the voltage on the emitter of Q2, Vout, is higher than the voltage on the emitter of Q1, Vin, more current will flow in Q2. At some point the current in Q2 is large enough to pull up in the gate of PMOS device M1 turning it off. Conversely, if Vin is equal to or greater than Vout Q2 will not have enough current to pull Vgate high, or be completely turned off. Note that for the case where Vin is equal to Vout the current in both PNP transistors will be equal and equal to Vin-VBE/R1. Because R1 is larger than R2 the voltage on Vgate will be smaller, that closer to ground turning on M1. 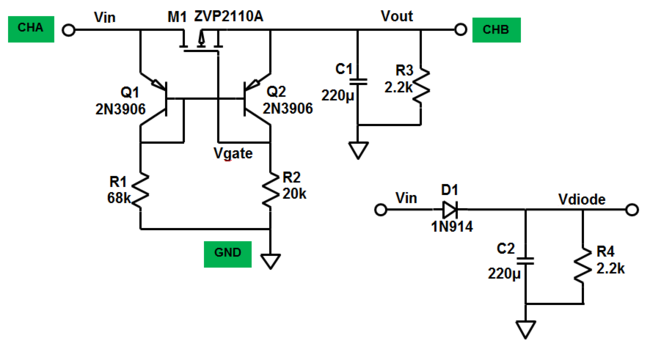 Just as in the op-amp based example there are limitations on the lowest voltage the circuit can operate at. As before, the minimum voltage is set by the threshold voltage of PMOS transistor M1. The maximum voltage difference between Vout and Vin (when M1 is off) is determined by the reverse breakdown voltage of Q1's emitter base junction. The difference voltage between Vout and Vin appears across the series combination of Q2's emitter-base and Q1's emitter base. Q2 will be forward biased and Q1 will be reverse biased. The emitter base reverse breakdown voltage for the 2N3906 devices used here is around 7 or 8 volts. For higher voltage designs transistors with much higher breakdown voltages will need to be chosen.

Another consideration when using this circuit is the speed at which M1 can be turned on and off. The fall time of Vgate is nominally set by the resistance value of R2 and the gate capacitance of M1. The gate capacitance can be large for high current MOS devices. The rise time of Vgate is largely set by maximum possible current that Q2 can deliver. To a large extent this is set by the beta of Q2 and the amount of available base current. The base current in Q2 is set by the value of R1 and the output voltage Vout. The pull up current from Q2 will in most cases be large enough to turn off M1 quickly, the turn on time will generally be the slower of the two times.

Build the circuit in figure 3 and the simple diode based rectifier. Compare the Vin to Vout voltage drops for all three circuit examples from figures 1 and 3.