The AD7303 is a dual, 8-bit voltage out DAC that operates from a single +2.7 V to +5.5 V supply. Its on-chip precision output buffers allow the DAC outputs to swing rail to rail. This device uses a versatile 3-wire serial interface that operates at clock rates up to 30 MHz, and is compatible with QSPI, SPI, microwire and digital signal processor interface standards. The serial input register is sixteen bits wide; 8 bits act as data bits for the DACs, and the remaining eight bits make up a control register.

The on-chip control register is used to address the relevant DAC, to power down the complete device or an individual DAC, to select internal or external reference and to provide a synchronous loading facility for simultaneous update of the DAC outputs with a software LDAC function.

The AD7303 is available in an 8-pin plastic dual in-line package, 8-lead SOIC and microSOIC packages. 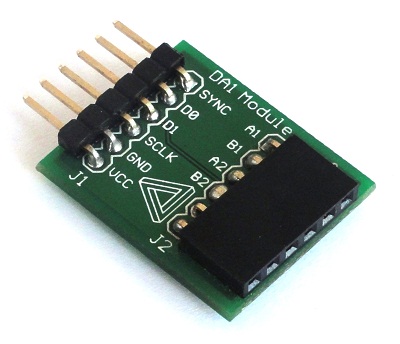 The Communication Driver has a standard interface, so the AD7303 driver can be used exactly as it is provided.

There are three functions which are called by the AD7303 driver:

The following functions are implemented in this version of AD7303 driver: