The part incorporates a power-on reset circuit that ensures that the DAC output powers up to 0 V and remains powered up at this level until a valid write takes place. The part contains a power-down feature that reduces the current consumption of the device to 400 nA at 5 V and provides software-selectable output loads while in power-down mode for any or all DAC channels.

The outputs of all DACs can be updated simultaneously using the LDAC function, with the added functionality of user-selectable DAC channels to simultaneously update. There is also an asynchronous CLR that updates all DACs to a user-programmable code—zero scale, midscale, or full scale.

The AD5628 utilizes a versatile 3-wire serial interface that operates at clock rates of up to 50 MHz and is compatible with standard SPI®, QSPI™, MICROWIRE™, and DSP interface standards. The on-chip precision output amplifier enables rail-to-rail output swing. 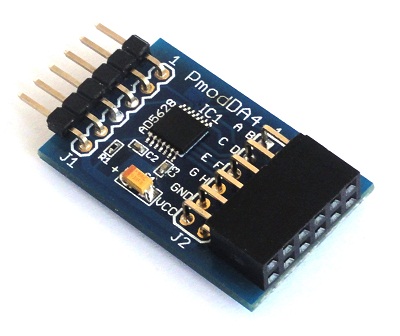 The Communication Driver has a standard interface, so the AD5628 driver can be used exactly as it is provided.

There are three functions which are called by the AD5628 driver:

The following functions are implemented in this version of AD5628 driver: