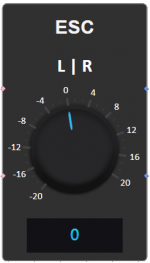 The Enhanced Stereo Capture (ESC) algorithm takes a stereo record-signal and creates a wider stereo image. The ESC is meant as a record algorithm in order to capture an enhanced stereo image from two closely spaced microphones.

The ESC algorithm accepts two input signals obtained from two closely spaced microphones. The algorithm separates these two signals and widens the stereo image. The end perceptual result is a widened stereo image as if the audio had been captured by microphones with greater L/R separation. The algorithm is based on proprietary filtering and a Stereo Balance Gain that adjusts how much stereo effect is archived in the algorithm.

Depending on the spacing of the microphones in the record environment, a different Stereo Balance Gain should be selected. There are two recommended methods to do this required algorithm tuning (shown in the Example section).

The tuning required for method 1) can be done within SigmaStudio. The schematic image in example section shows how this is accomplished. The goal is to adjust the Stereo Balance Gain until the greatest visual difference in level is achieved between the left and right output signals..