The graph below shows an input sine tone and the resulting clipped output with threshold values at: High: 0.8 Low: -0.2

The following image shows the Data Controlled Clip, being compared to a Hard Clipper and also the direct signal coming from the Inputs. A stereo switch mux allows for selection of the processing type, and then the signals are routed to the Outputs. Two DC Input blocks are used to define the threshold values for the Data Controlled Clip. They are currently set with the same values in the Hard Clip cell. The output from both clip blocks will be the same, but have different ways to control the thresholds (coefficients vs. data inputs). 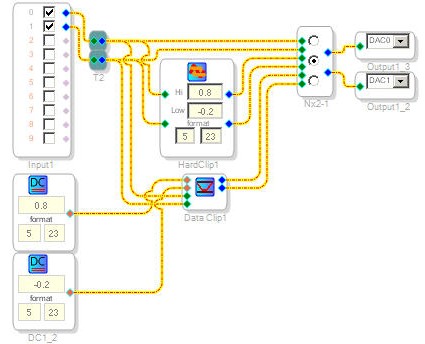