Click here to return to the Basic DSP page

The Bitwise Logic block applies one of five selectable logic operations to each bit of the two input signals and outputs the result on the output pin. And, Or, Nand, Nor, and Xor operators are available.

To change the operator: Left click on the icon button, each click will toggle the active operator which is shown in the icon image and label.

Note: the operator is a compile time settings you will have to compile and download the project each time you change the operator. 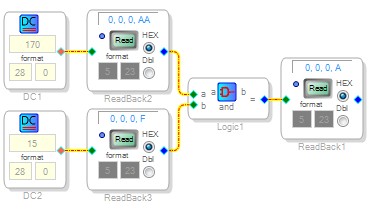