The bare metal framework supports numerous peripherals including audio codecs, A2B, and S/PDIF. The framework itself ensures that audio is properly sample-rate-converted (as necessary) and that audio arrives where it needs to get in time. The framework has been architected such that code which deals with the hardware is abstracted away.

When using a single SHARC core for audio processing, audio is only routed through the first SHARC core. When a new set of audio buffers is ready to be presented, the audio callback function processaudio_callback is called (located in callback_audio_processing.cpp). 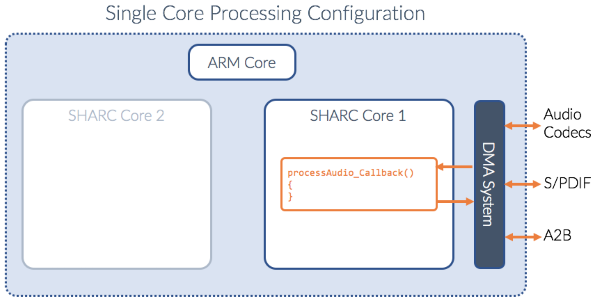 When using both SHARC cores for audio processing, audio is sent first to Core 1 and then to Core 2. Audio from Core 2 is then sent back to Core 1 such that it can be routed to specific peripherals via the processaudio_output_routing() function. This function is only used when dual core processing is enabled.

Both cores rely on the same style of audio callback so audio processing code can be moved from one core to another without rewriting the code. 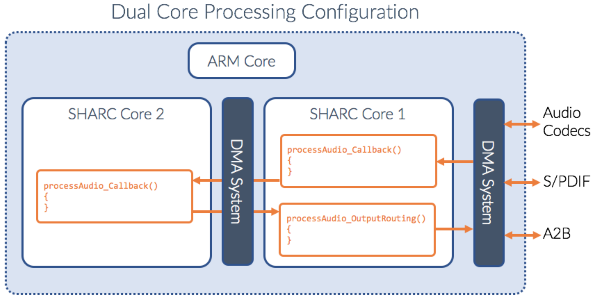 As described above, the DMA system is moving audio data around in the background while both SHARC cores are processing blocks of audio.

In both SHARC Core 1 and SHARC Core 2, there is a file called callback_audio_processing.cpp. These files are where you can begin putting your audio processing functions. These files use the same naming conventions so it becomes pretty easy to move algorithms from one core to another.

These callback files are written in C but have the .cpp extension so existing C++ code can also be used with the framework and called from these callbacks.

processaudio_setup() : This is where any initialization code goes for your audio algorithms. This is where, for example, you might generate filter coefficients or allocate memory for a delay line. This function is called by the Startup_Code_Core.cpp file in each core once all of the DMAs have been set up but before everything is kicked off.

processaudio_callback() : This is where your main audio processing goes. You’ll find a for loop in here that is set to the project-wide block size defined in audio_system_config.h. Depending on the framework you’re using, there are a number of specific buffers that you can read and write to (e.g. ADAU1761 codec, SPDIF in and out, A2B bus, etc.). This function gets called everytime a new block of data is ready to be processed. All of the I/O buffers are single-precision floating point.

processaudio_background_loop() : If your algorithm relies on any background processing (like gathering larger blocks of data and running an FFT, this is where you can do that. This function is called by the Startup_Code_Core.cpp file once the audio has been kicked off. You can put a while(1) loop within this processaudio_background_loop() and wait for pend on a flag that indicates you have enough audio buffered for an FFT, for example.

processaudio_mips_overflow() : If the processaudio_callback() function takes too long to run and does not complete by the time the next audio block arrives, this callback function is called. There are also variables in the shared memory/multicore audio struct that contain telemetry data on the number of overflow events.

On SHARC Core 0, you’ll also notice that there is a function called processaudio_output_routing() that is only enabled when using both processors to process audio. This function allows you to route the audio that SHARC Core 2 just processed out to various buffers (e.g. ADAU1761 codec, SPDIF in and out, A2B bus, etc.).

If you open up the header file that corresponds to the audio framework you are using, you will see all the various buffers available. If you want to explicitly write data to a certain peripheral, you can also write to that buffer directly instead of the generalized alias.

The audio framework then manages the flow of audio between the cores and the conversion between fixed / floating point. And when using a dual core framework, audio is passed from core 1 to core 2 and core 2 to core 1 at the block interrupts.

The total number of cycles available in the audio callback can be calculated as follows: