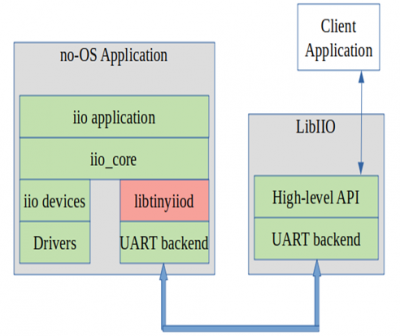 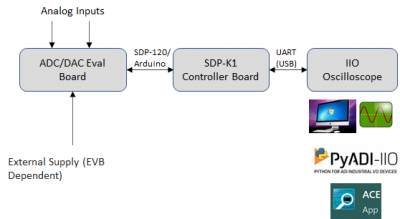 This code has been developed and tested on SDP-K1 Controller Board using the on-board SDP-120 Headers. However, same code can be used without or with little modifications on any Mbed enabled board which has Arduino Header Support on it, such as STM32-Discovery, STM32-Nucleo, etc.
26 Dec 2022 09:51 · Janani Sunil
26 Dec 2022 10:39 · Janani Sunil

The AD7606 device is configured in “Serial Software” mode in the firmware. AD7606 uses SPI communication for device register access and data capture.

SDP-K1 is powered through USB connections from the computer. SDP-K1 acts as a Serial device when connected to PC, which creates a COM Port to connect to IIO Oscilloscope GUI running on windows-os. The COM port assigned to a device can be seen through the device manager for windows-based OS. 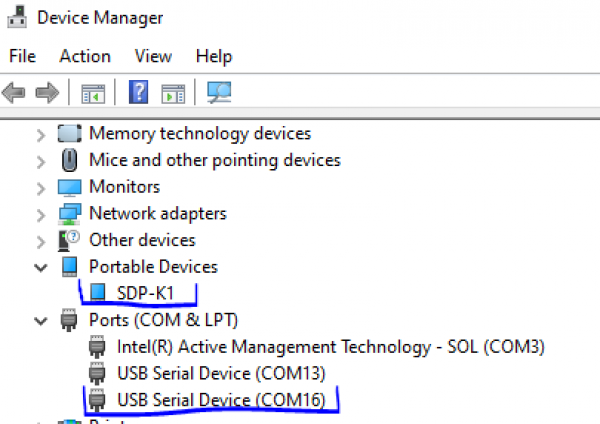 SDP-K1 can support high speed VirtualCOM port USB interface, so by default VCOM is configured as default interface in the firmware. The interface can be set to UART by defining macro “USE_PHY_COM_PORT” in the app_config.h file.

This section briefs on the usage of MBED firmware. This also explains the steps to compile and build the application using mbed and make based build.

Build Guide for Precision Converters MBED firmware (Use below link):

This library provides an abstracted library interface to communicate IIO device and IIO client application (IIO Oscilloscope) without worrying about the low level hardware details. Download and install below Libiio windows installer in your computer.

Libiio installer for Windows (Use below link):

This is a GUI (Graphical User Interface) based IIO client application for data visualization and device configuration/debugging. The data from IIO devices (ADCs/DACs) is transmitted over Serial/Ethernet/USB link to IIO Oscilloscope client through the abstracted layer of “libiio”. Download and install below IIO Oscilloscope windows installer in your computer.

IIO Oscilloscope installer for Windows (Use below link):

Ensure that hardware connection has been made properly in between Controller Board (SDP-K1) and ADC Eval board. Also ensure all software's (IIO firmware, Libiio windows installer and IIO Oscilloscope windows installer) are downloaded and installed in your computer before trying to communicate with the device.
26 Dec 2022 10:52 · Janani Sunil

Open the IIO Oscilloscope application from start menu and configure the serial (UART) settings as shown below. Click on refresh button and AD7606 device should pop-up in IIO devices list. Click 'Connect' and select the AD7606 device from the drop down menu list of 'Device Selection'.

The IIO Oscilloscope allows user to access and configure different device parameters, called as 'Device Attributes“. There are 2 types of attributes:

How to read and write attribute:

DMM tab can be used read the instantaneous voltage applied on analog input channels. Simply select the device and channels to read and press start button.

*Note: The voltage is just instantaneous, so it is not possible to get RMS AC voltage or averaged DC voltage. Also, when using DMM tab, it is not encouraged to use Data Capture or Debug tab as this could impact data capturing.

To capture the data from AD7606 IIO device, simply select the device and channels to read/capture data. The data is plotted as “ADC Raw Value” Vs “Number of Samples” and is just used for Visualization. The data is read as is from device without any processing. If user wants to process the data, it must be done externally by capturing data from the Serial link on controller board.

*Note: The DMM or Debug tab should not be accessed when capturing data as this would impact data capturing.

The continuous time domain data capture can work correctly at ODR/Sampling Rate defined in the firmware code (32KSPS) and also at 0 Oversampling Rate. For plotting frequency domain response max 4096 samples can be selected due to limited buffer size in the firmware. These limitations are due to the firmware architecture and design choices and does not limit the actual device specifications provided in device datasheet 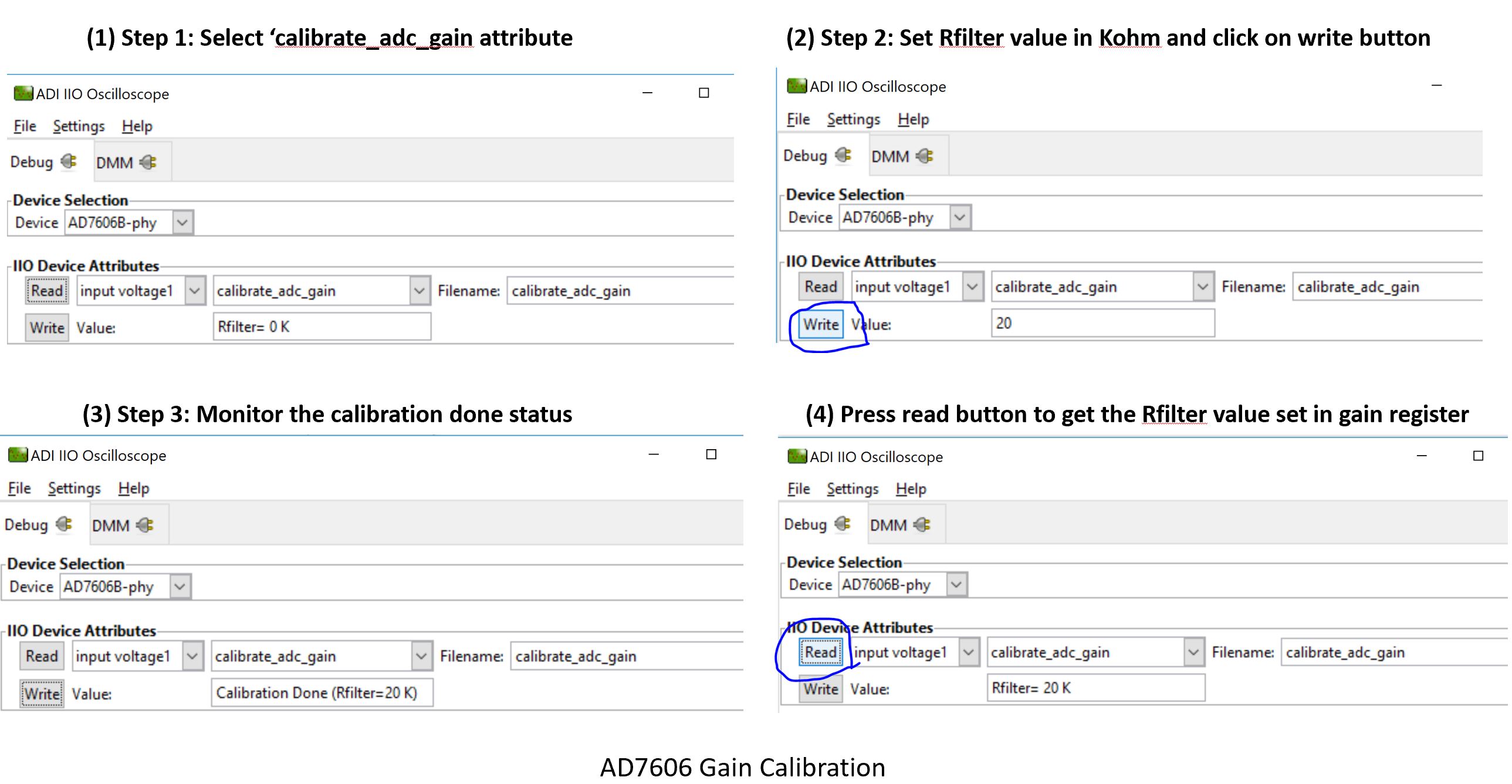 To perform ADC offset calibration, select the 'calibrate_adc_offset' attribute. It should automatically perform the calibration. Also, if 'Read' button is pressed, the calibration should happen one more time. 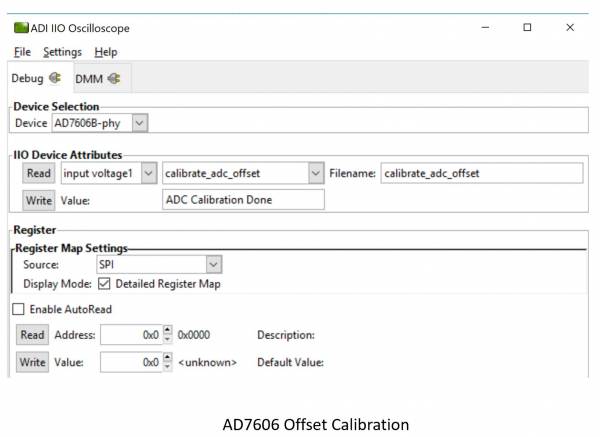 AD7606B device provides an open circuit detection feature for detecting the open circuit on each analog input channel of ADC.

There are 2 modes to detect open circuit on analog inputs (Refer AD7606B datasheet for more details):

The auto open circuit detection on each individual ADC channel can be done by performing 3 easy steps mentioned in below screenshot.

*Note: The diagnostic mux control must operate when input range is +/-10V

Data capture can be achieved with python based IIO clients, using 'pyadi-iio' library. A possible option using ADI's pyadi-iio library in python has been demonstrated in the forthcoming sections. The python scripts are provided along with firmware package.

Output Obtained from the Python Script

While executing the adxxxx_data_capture.py, the command prompt requests for the number of samples to be entered by the user.

On Entering the number of samples n, on successful completion of capturing n samples, the data points are stored in a csv as adc_data_capture.csv in the folder where the script is present.

The below block diagram shows the AD7606 IIO firmware layer.

This file can be used to:

This file defines the user configurations for the AD7606, such as SPI parameters (frequency, mode, etc) and other init parameters used by No-OS drivers to initialize AD7606 device (e.g. required GPIOs, software/hardware mode, etc). These are the parameters loaded into device when device is powered-up or power-cycled.

This file defines getter/setter functions for all the device and channel specific attributes (related to AD7606 devices) to read/write the device parameters. The majority of device specific functionality is present in this module.

The functionality related with no-os drivers is covered in below 2 files:

It is hoped that the most common functions of the AD7606 family are coded, but it's likely that some special functionality is not implemented. Feel free to consult Analog Devices Engineer-Zone for feature requests, feedback, bug-reports etc.
resources/tools-software/product-support-software/ad7606_mbed_iio_application.txt · Last modified: 27 Dec 2022 07:45 by Mahesh Phalke