In this section, we will show an IEEE 802.11b beacon frame receiver example. In this example, FMCOMMS2 is used as RF front-end, which captures the WiFi signals over the air. These signals are then streamed from target to Simulink via the iio_sys_obj block. The Simulink model is shown in the figure below, where the Receiver and PLCP Display are from an existing Simulink example IEEE 802.11 WLAN - Beacon Frame Receiver with USRP® Hardware. This Simulink model will decode the received WiFi signals, and display all the information from the beacon frame.

In order to run this example, your MATLAB version should be 2014b or higher, and your license needs to include the following components:

The model can be found here:

Its initialization functions are based on the ones of IEEE 802.11 WLAN - Beacon Frame Receiver with USRP® Hardware.

In this example, we set up the target using iio_sys_obj block. One of the most important parameters is the “RX_LO_FREQ”. It should be set as the center frequency of the incoming WiFi signal channel. In this case, since the incoming WiFi signal is at Channel 11, this frequency is set at 2462 MHz. (The “TX LO Frequency” on your target should be set at least 50 MHz away from the “RX_LO_FREQ” in order to avoid interference.)

One other tip: In order to avoid saturation of the RX channel, use the manual gain control mode to adjust the received signal strength, so “RX1_GAIN_MODE” is set as uint8('manual').

With everything set up properly, we can run the model and get the results below: 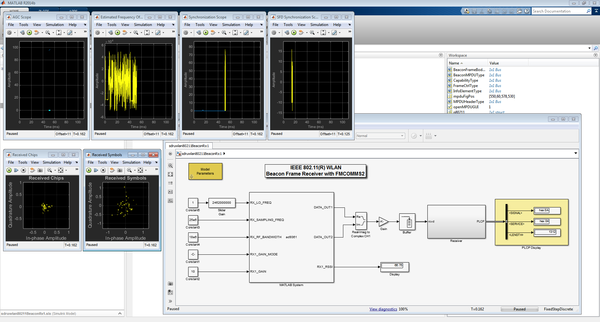 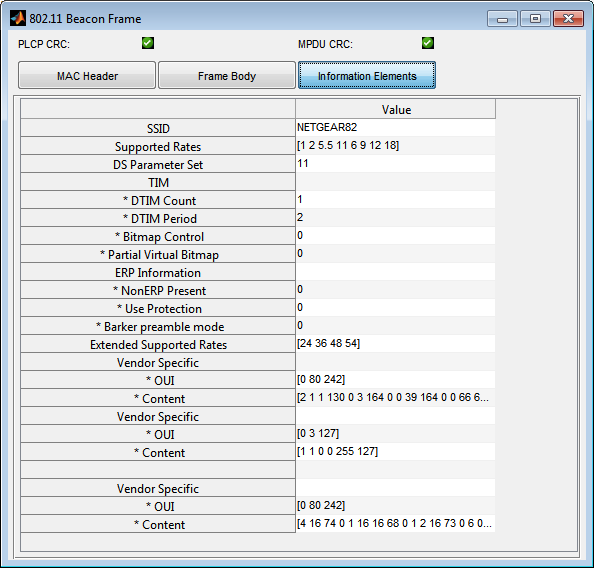