Every HDL design of a reference project can be divided into two subsystems: 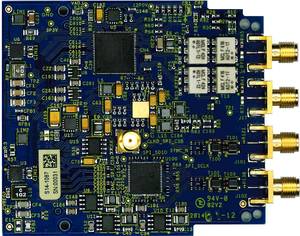 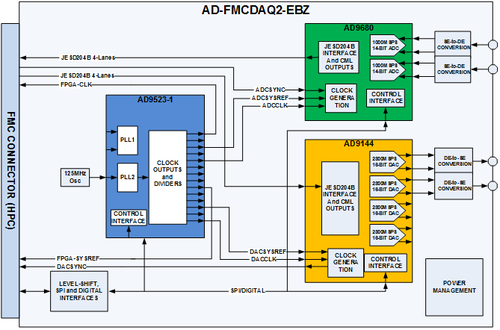 A functional block diagram of the system is given below. The system consists of four functional partitions - transmit path, receive path, clocking, control interfaces and power management.

The reference design generates the signals for AD9144, using the JESD204B interface to transfer data and SPI and GPIO for controlling the part. The JESD204B connection is done through 4 lanes at 10Gbps.

The reference design captures data from the AD9680 through the JESD204B interface and uses SPI and GPIO for controlling the part. The JESD204B connection is done through 4 lanes at 10Gbps.

The system is clocked through an on board crystal (125MHz). The clock path mainly consists of the AD9523-1 which upconverts this signal to ~3GHz, and then divides this back down to any integer divider of this ~3GHz output.

The default reference design that ADI provides does the following:

The AD9523-1 also supplies the SYSREF signal to all parts of the JESD204B system allowing for deterministic latency in the system.