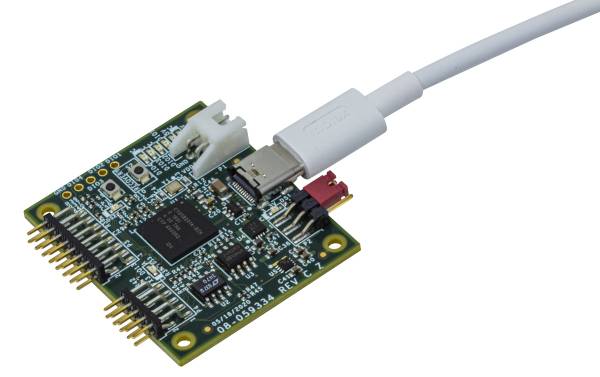 The EVAL-ADIS-FX3 hardware is completely open-source and MIT licensed. It includes many improvements learned from the previous generations of evaluation systems and is designed to be small, flexible, reliable, and low-cost. Some of the board’s features include:

The EVAL-ADIS-FX3 firmware was also redesigned to offer developers the flexibility to interface with as many external devices as possible. The firmware includes support for:

The EVAL-ADIS-FX3 does not include any onboard GPIO logic level shifters and is designed to only support 3.3V logic! The EVAL-ADIS-FX3 and may be permanently damaged if subjected to signals > 3.6V!

The open-source, MIT-licensed design files and resources are located in the iSensor FX3 API repository on GitHub (link). An EVAL-ADIS-FX3 may also be purchased here.

The image below outlines the various indicators and connectors available on the EVAL-ADIS-FX3. 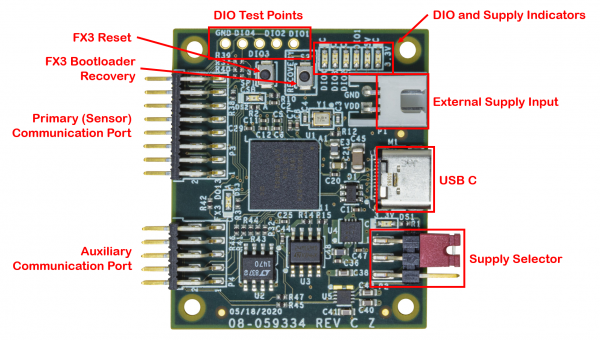 The EVAL-ADIS-FX3 interface pinouts are also listed below.

The recommended mating connectors are listed in the image shown below. 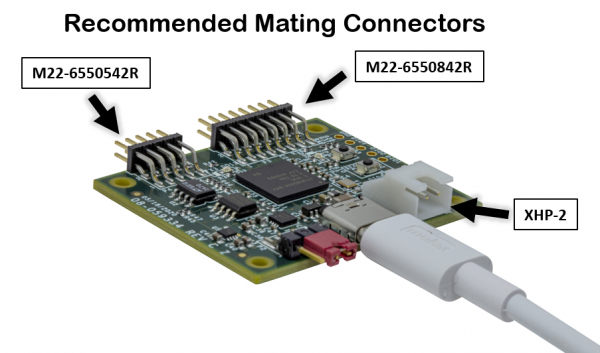 The FX3 API manages all the complex USB transactions and implements all the necessary tools to begin capturing high-speed, high-performance data in custom applications. This .NET-compatible API, written in VB.NET and C#, includes data streaming features tailored to reliably capturing inertial sensor data at the maximum data rate. The API is also fully documented (Sandcastle), open-source, and is licensed under the MIT license. The API also includes a wrapper library, allowing users to use the same API in any development environment with support for .NET (MATLAB, LabVIEW, Python, etc.)

The FX3 Firmware was designed with compatibility and flexibility in mind. The firmware attempts to follow the Cypress program workflow and relies on FX3 system threading, execution priority, and event flags to execute firmware subroutines and transmit sensor data. Custom vendor commands trigger subroutines embedded in the firmware that read and write SPI data, measure external pulses, generate clock signals, and manage board configuration. Several SPI streaming modes are implemented, which allow applications to communicate with nearly every device in the iSensor portfolio. The firmware is fully documented (Doxygen) and was developed using the open-source development tools and API offered by Cypress.