This document is intended to provide firmware developers an introduction into the code structure and specifics on some of the time critical functions. It should be used in conjunction with the EV-HT-200CDAQ1 / HT-DAB-1 Keil MDK project that is available on the ADI GitHub

The project controls the activity of the EV-HT-200CDAQ1, which has three Analog Devices ADCs, an analog multiplexer and conditioning circuitry. Users can send commands to the board via a PC (COM port over USB). The board will respond by either executing the command or issuing an error message. Responses to commands are transmitted on the UART back to the PC.

The project is organized into .c and .h files. The following tables summarizes the contents of more salient files. 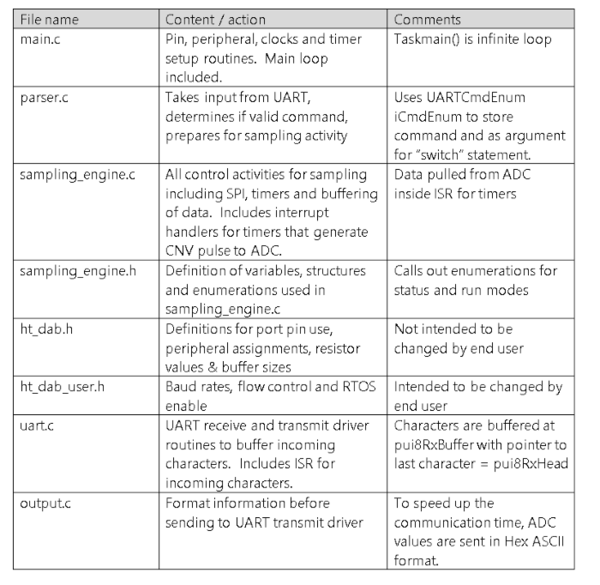 A simplified flow diagram is shown in below. The ADC sampling engine is time critical and is explained in a later section. 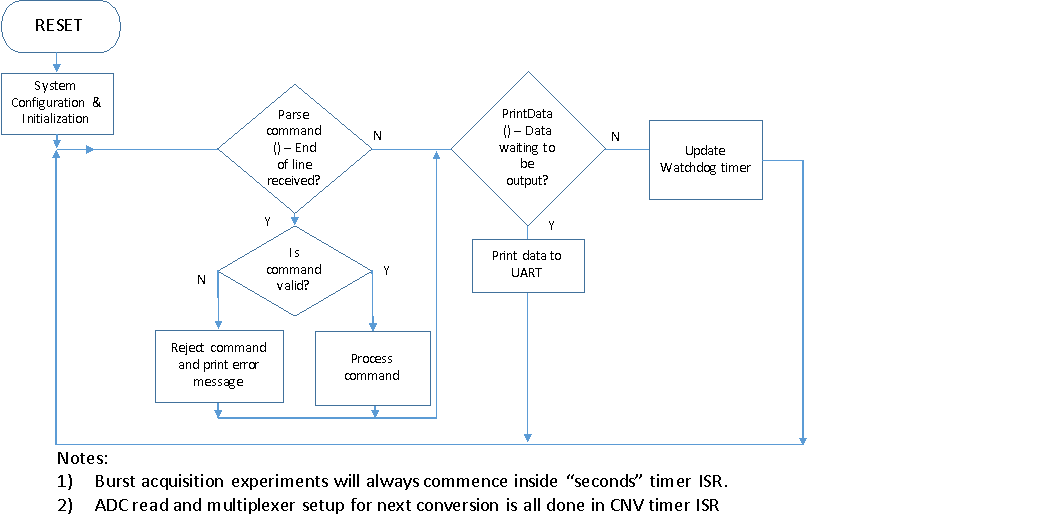 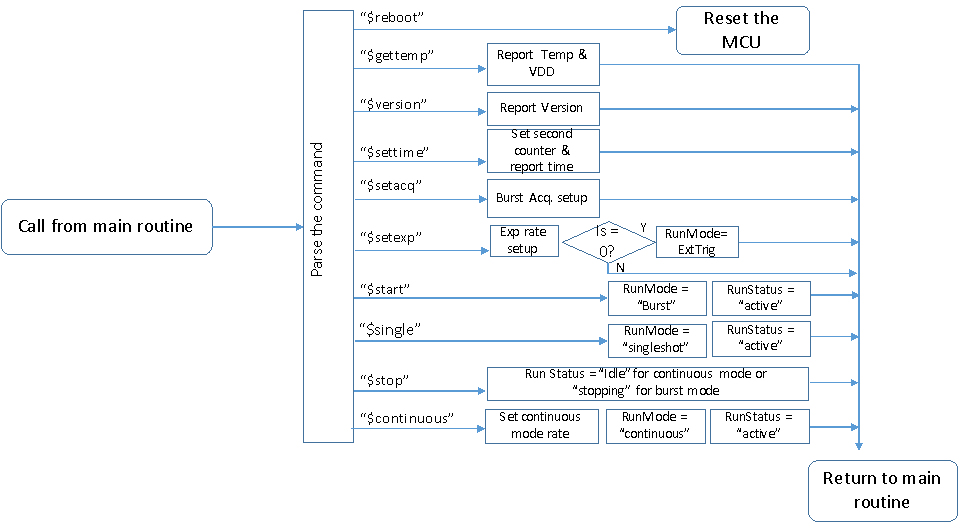 As commands are entered and data is collected, there are important state parameters used to coordinate the sampling engine and the UART output activity. The table below lists the most important enumerations for the project. 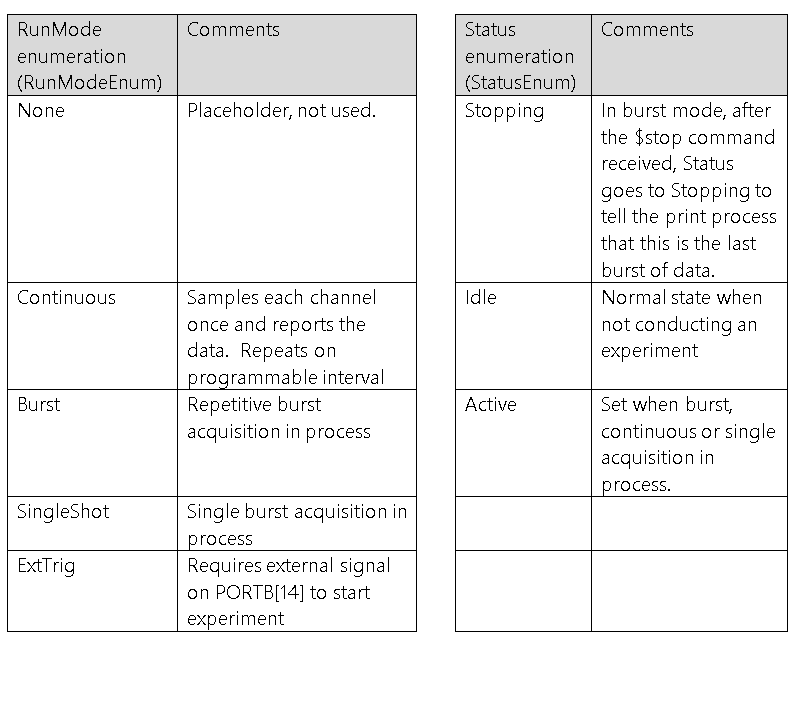 This section has tables showing the pins, peripherals and interrupts used in the project. All other GPIO pins, timers and peripherals can be used by the end user’s application. 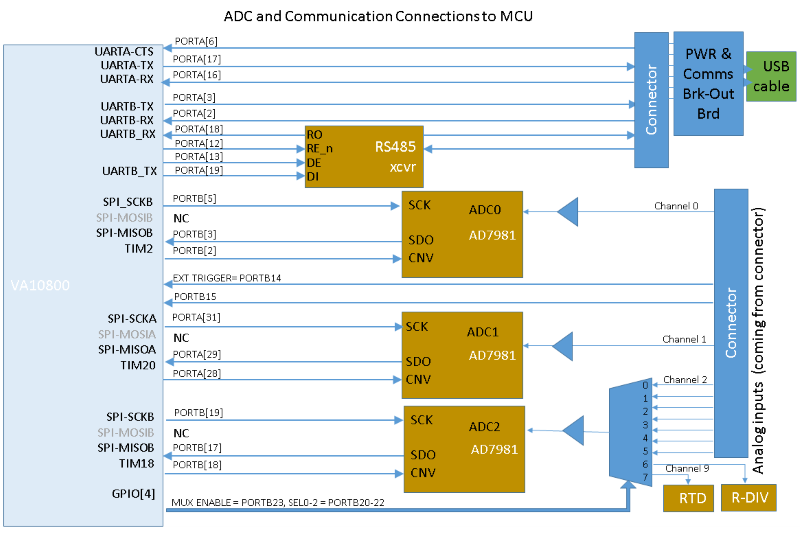 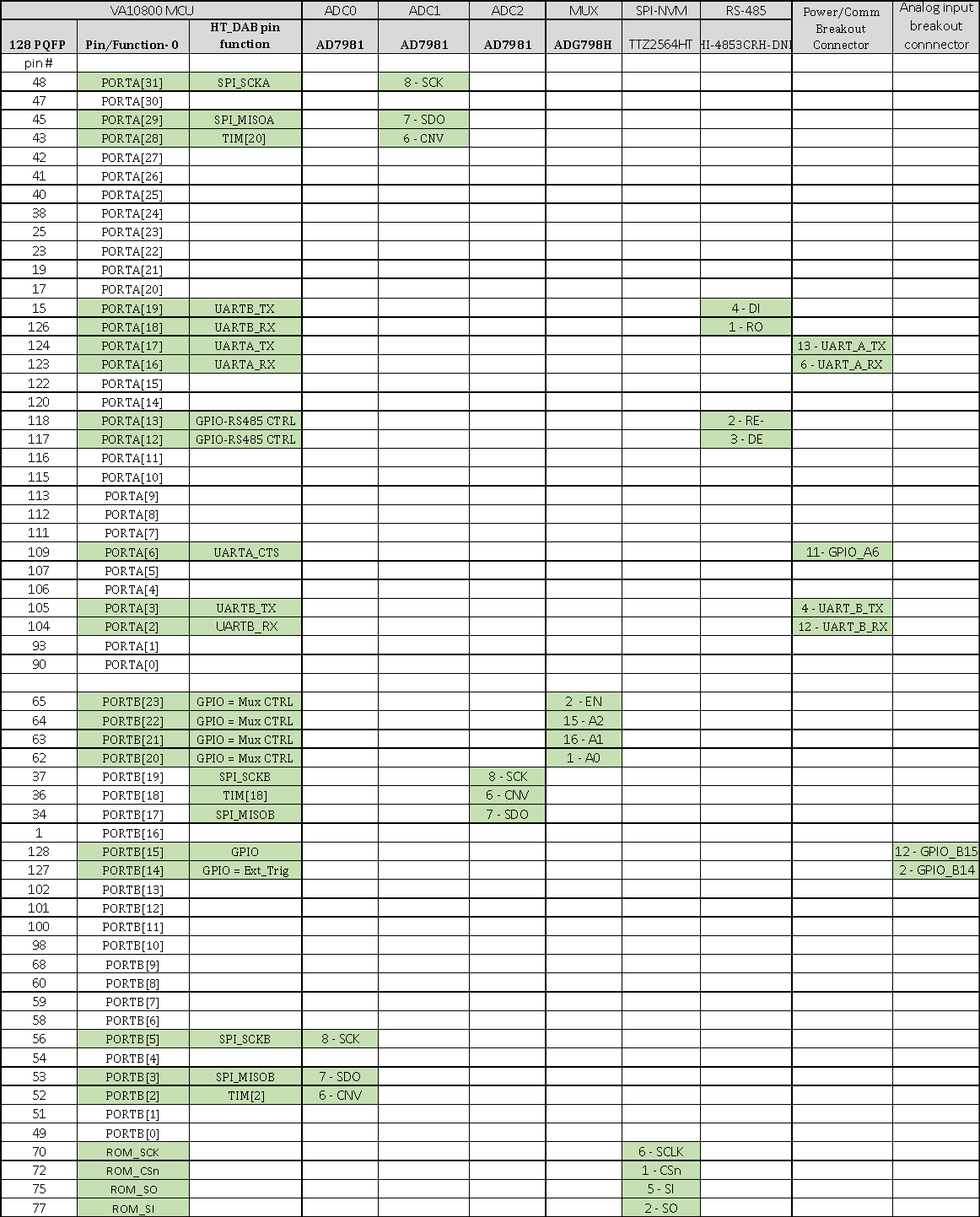 Peripheral and Timer Use Table 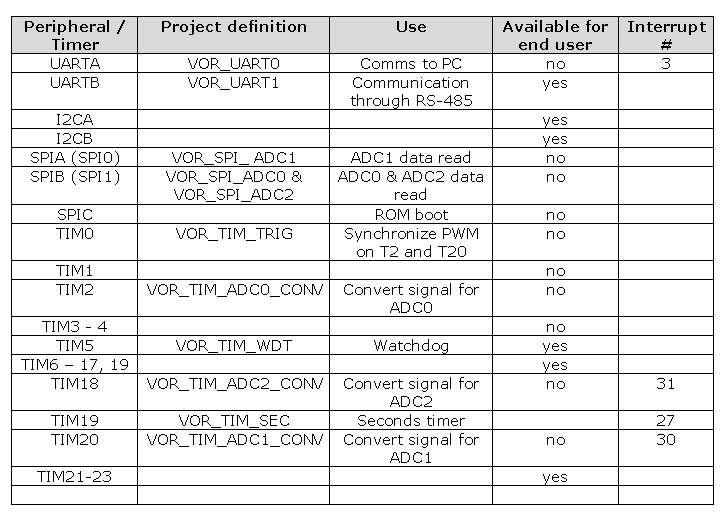 A PC will be able to send information to the MCU via a USB to UART converter. The PC can command various activities including: a conversion sequence to begin, set a second counter value or request a temperature reading.

UART receive software is implemented in an ISR when the FIFO buffer has information available. Inside the ISR, a character string is buffered in a 128-byte array, with start pointer = *pui8RxHead.

As part of the main loop, the “ParseCommand” function is called. This will analyze the UART “RxBuffer”. When an end of string character (“\r”) is received, the string is compared against valid commands. All command strings begin with “$”. Invalid command strings will result in an “$ERROR:” response on the UART transmitter. Using the backspace character to correct typing errors is allowed. The use of the back and forward arrows to edit an input string is not supported.

When prompted via a valid UART command, an ADC sampling sequence (“experiment”) is initiated. “m_iStatus” and “m_iRunMode” variables indicate a pending experiment. There are four cases possible:

For iterative burst and single shot burst, the second (1/60 of a minute) counter ISR will check the status and mode information and commence the experiment. That will force the first experiment in these two modes to align with the second counter rollover event.

The MCU will use the SPI interface to clock data out of the ADC. The conversion start signal is generated with a timer which allows precise sampling period control and a precise pulse width needed for the CNV input signal to the ADC. Before the next conversion starts, the data from the present conversion is clocked out completely. This will eliminate any clock noise from corrupting the analog input during the conversion time.

The ADC Data Out signal will go to a high impedance state when a conversion is being made. To reduce current consumption and eliminate potential switching noise, the MCU’s internal pull-up resistor (~33kΩ) is enabled on all MISO pins.

The ADC servicing is done in the timer interrupt service routine. The conversion will begin on the rising edge of a timer output and the ISR is called on the falling edge as shown in diagram below. 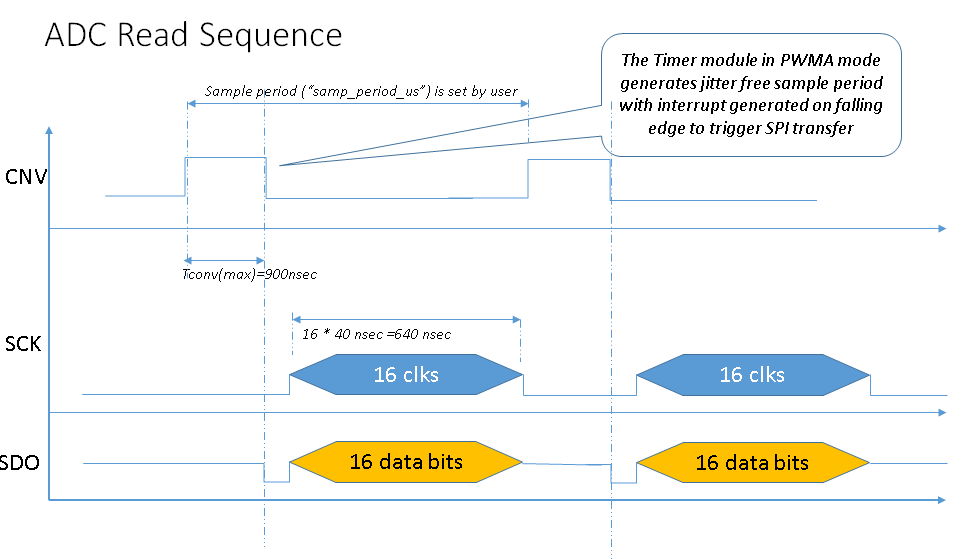 Data collected from the ADC is stored in a dedicated 16kbyte (16,384) buffer that will later be sent out a UART port to a PC host. The buffer can be divided into segments for different ADC channels as set by the incoming command. The 16kbyte buffer is storing 16-bit conversions, thus this is an 8Ksample buffer.

To achieve the fastest sampling rate, software was written in a non-conventional way and the compiler optimization must be set to level 3 for maximum performance. Some compilers automatically store all registers before starting an ISR. This is not allowed if 2.4ųs conversion rates are expected.

The SPI clock is set to 25 MHz. This is half the MCU system clock and the fastest achievable SPI master clock from the VA10800. Special settings are required to make this operate correctly at this speed. The data in (MISO) of the MCU must be setup to capture the ADC’s output on the falling edge of the SPI SCK signal. The filtering for these pins must be disabled and the synchronous setting disabled. FILTER = 0x1. 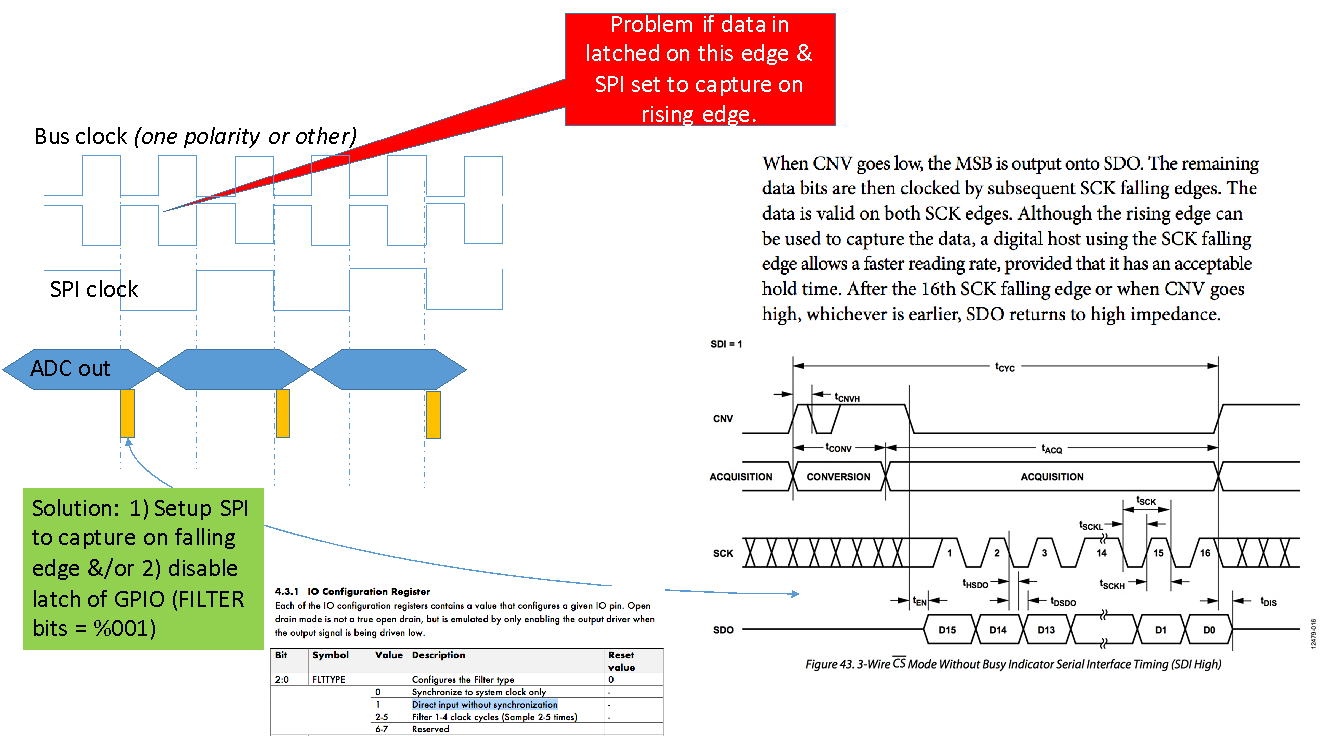 One of the sampling timing requirements is that the CNV signals for ADC0 and ADC1 being exactly aligned. This is accomplished by using the cascade function of the Vorago timers. One timer, TIM_0, is used to trigger two other timers that create the CNV signals using the PWM function. 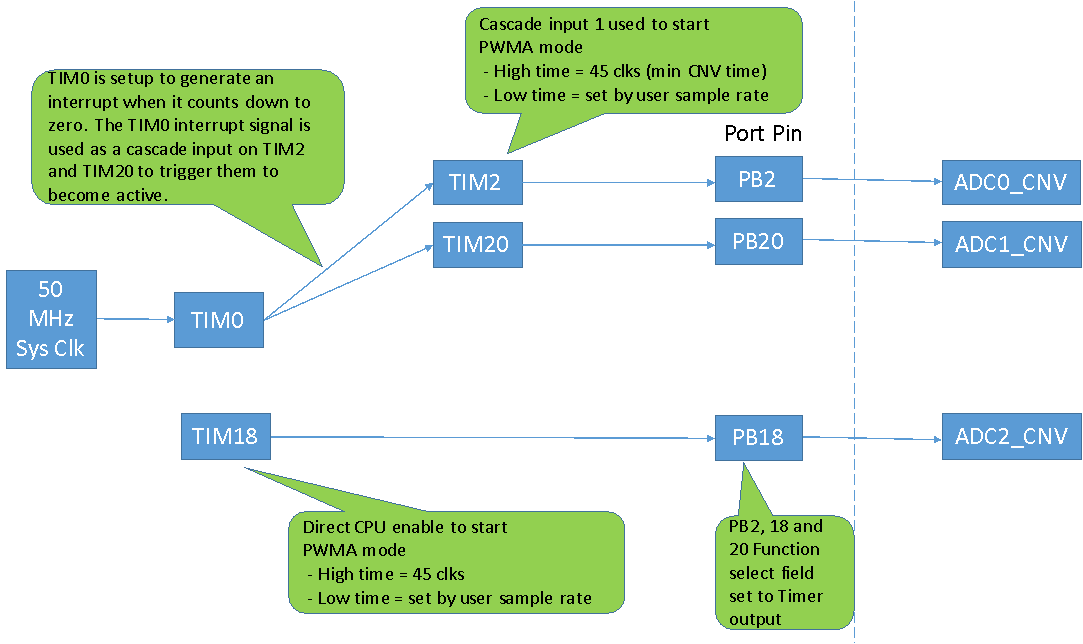 External trigger mode allows an external signal to dictate when a burst experiment commences. To still allow simultaneous conversions on ADC0 and ADC1, the same scheme as outlined in section 6.2 is used with the addition of TIM0 being triggered using its cascade 1 input from PORTB[14] pin interrupt. As a rising edge is detected on PORTB[14], an interrupt request is generated which will put TIM0 in active mode which will quickly count to zero and trigger TIM2 and TIM20. Note that the pin interrupt does not generate an interrupt to the CPU since the IRQSEL peripheral is not configured to do this.

VCC and RTD Sampling with Burst

The viewer program on the PC expects VCC and RTD information to go along with every burst sequence. Four samples of channel 8 (VCC) and channel 9 (RTD) are conducted at the end of each burst sequence. An average is calculated and reported as the first line of each Burst experiment UART output sequence. The sample rate for these conversions is set to 10ųs independent of what the $setacq calls out. This was done to ensure the analog multiplexer and associated op-amp have time to stabilize.

The UART is the primary communication channel from the MCU to a user. It is routed through a UART to USB converter to a PC’s USB port. A virtual serial communication port program such as PuTTY can be used to collect the data. (TeraTerm did not support 2Mbit/sec rates and could not be used)

Data buffered from the ADC is stored in 16-bit integer format. Data sent out the UART will be a 5-byte stream in hexadecimal ASCII including a “comma” delimiter. (i.e. ABCD,1234,)

The code is written in a FreeRTOS shell. This will allow users to create their own code without interfering with the data acquisition and reporting processes. A compiler directive in “ht_dab_user.h” can enable or disable the use of FreeRTOS. By commenting out the line with “#define USE_RTOS 1”, the RTOS code is removed from the project.

The downloaded version of FreeRTOS will completely stop all interrupts from occurring for a short period during the task change. For sampling rates of 4us or less, this can result in corrupt ADC reads. Software has been added to check for the sampling rate and to temporarily disable the RTOS during an experiment. 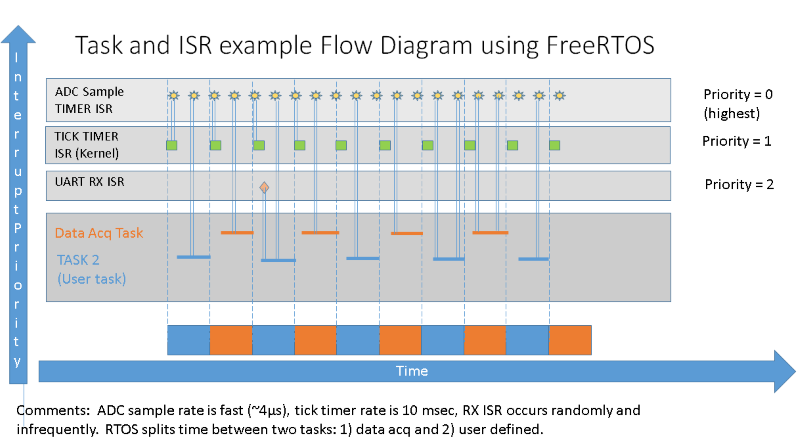 Due to some inherent interrupt blocking of FreeRTOS during task changes, a conflict can arise when the ADCs are being converted very rapidly, under 4us. During an acquisition experiment with sampling rate under 4us, the RTOS is temporarily disabled.

One timer is used to create a watchdog timer. If the timer is not serviced within a countdown interval, the MCU will be RESET and the RESET source will be WATCHDOG. The watchdog period is defined in ht_dab_user.h.

The RTD data sheet contains a table with resistance values for every 1°C. Firmware has created a linear interpolation conversion program for 5 different regions in the -55°C to 200°C range.

Both the RTD and VCC calculations account for a voltage divider network.

RTD and VCC calculations were modified to account for two 100kΩ resistors used to bias the output of the Analog Multiplexor. See the schematic for details on this.

As shown in the below diagram, the fastest ADC sample rate using interrupt is 413 kHz which corresponds to 2.4ųs. 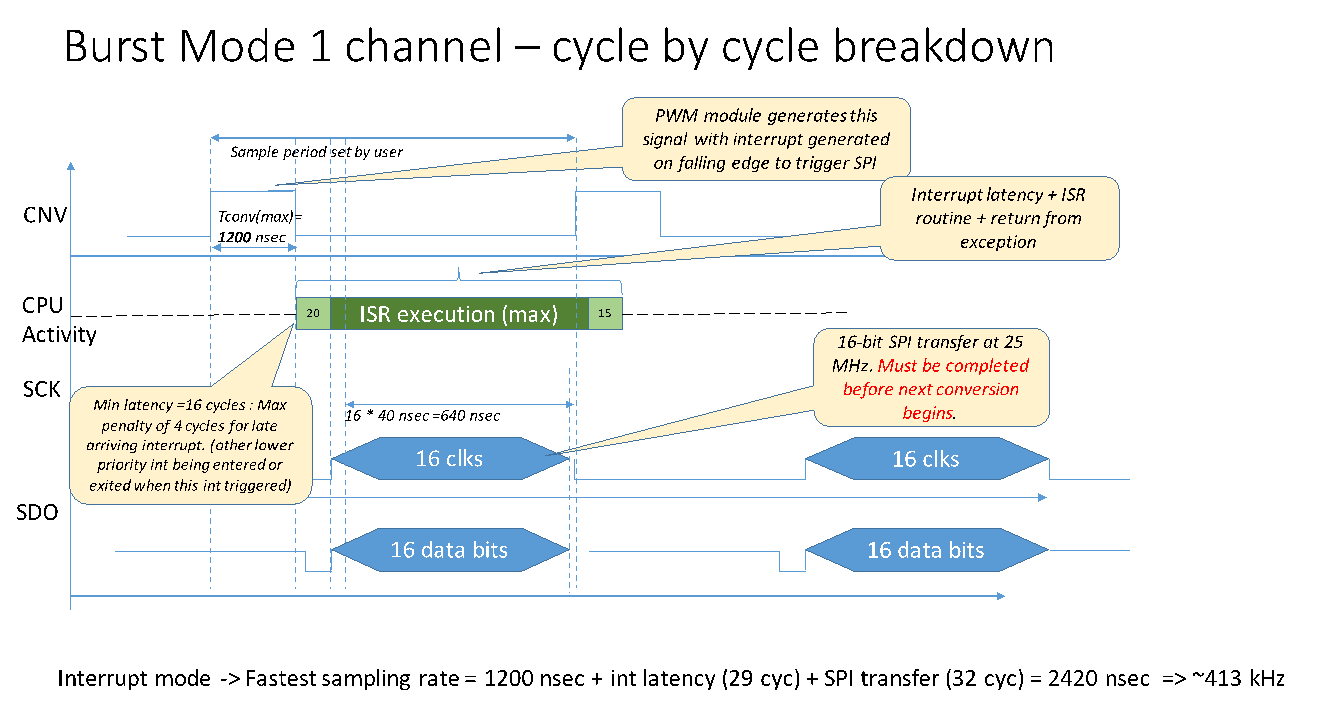 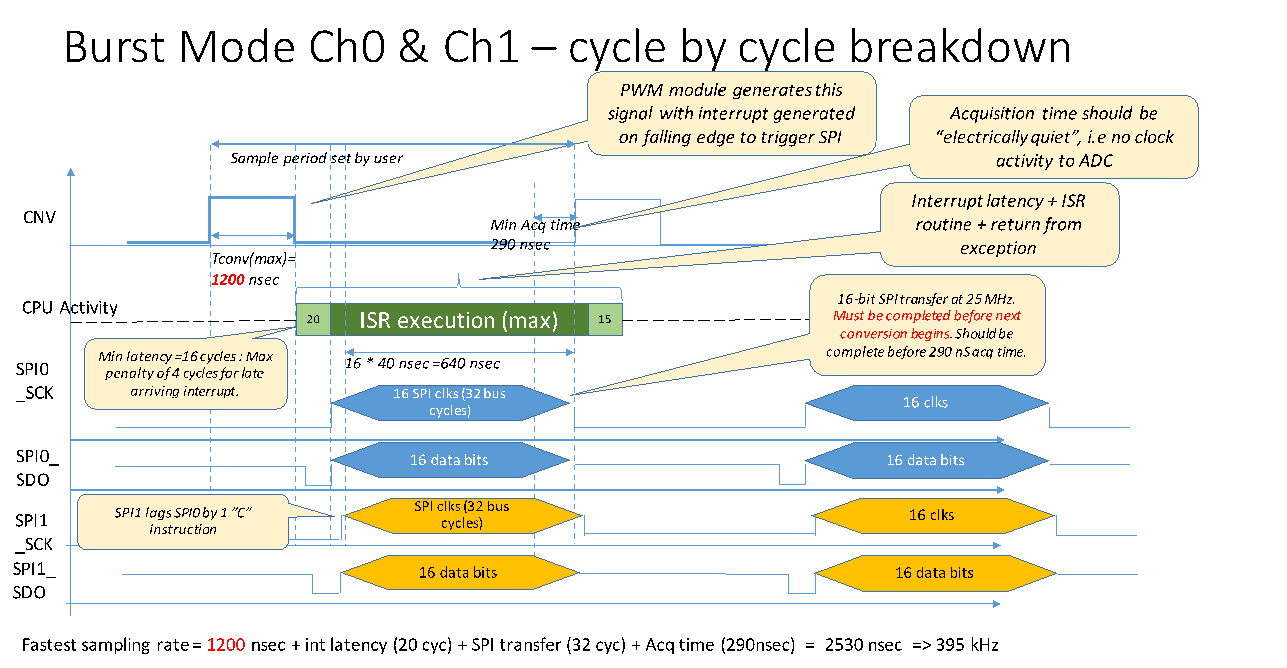 The MCU must be able to receive a 64-character string from the host PC at a baud rate of 2Mbps. This type of packet will not happen in rapid succession.

Due to bandwidth limitations of a PC’s USB port, flow control (CTS signal enabled) must be implemented on the UART transmitter. The UART module will automatically pause when the PC is not ready to accept more characters. The Tx performance is 100% dependent on the PC capability. We have seen cases where display refresh activity can slow the USB port down immensely.

CPU Processing Margin and Memory Use

The RTOS scheduler is allocating 50% of the CPU bandwidth for handling the acquisition task. Some activities are interrupt driven and the actual CPU cycles spent on these are dependent on sampling rate and amount of data being transmitted to a PC. The following table can be used to estimate the available CPU bandwidth.

The initial firmware package was developed and tested using the Keil µvision IDE revision 5.23. The code size is below 32k and the free evaluation version can be used.