The EVAL-ADICUP360 base board consists of two basic blocks:

This page describes the hardware connectors, the jumpers and switches configuration options, the USB connectors, and links to download the schematics and the layout. 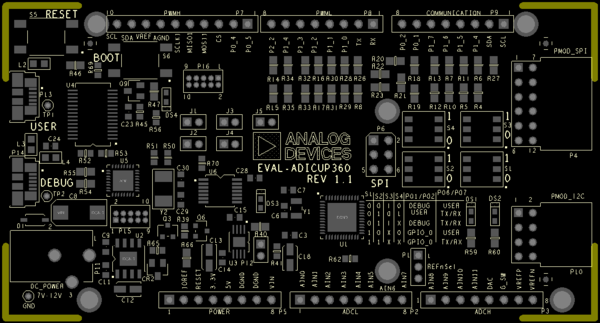 The following connectors are populated on the base board: 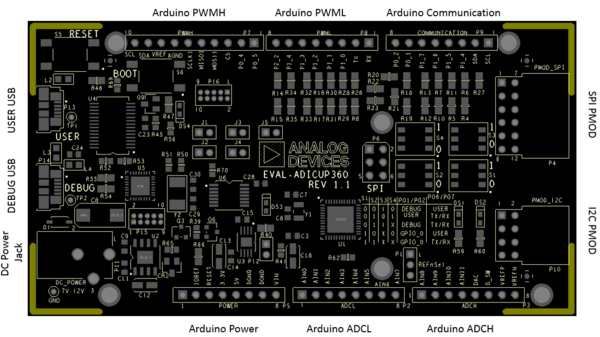 
There are 3 jumpers groups on the EVAL-ADICUP360 base board: 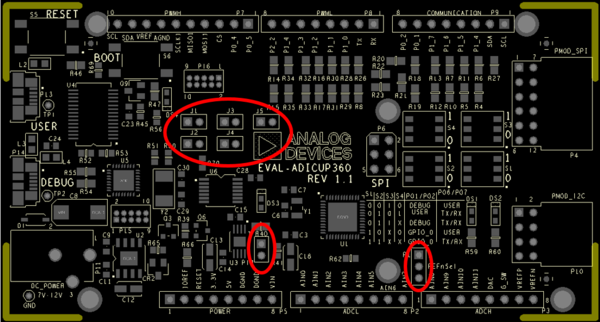 
There are 4 switches on the EVAL-ADICUP360 base board, which are used to multiplex pairs of pins (P0.1/P0.2, and P0.6/P0.7) to various different connectors on the board. Depending on how the pins are configured you may route them to the USB ports, use them for SPI communication or for UART communication. 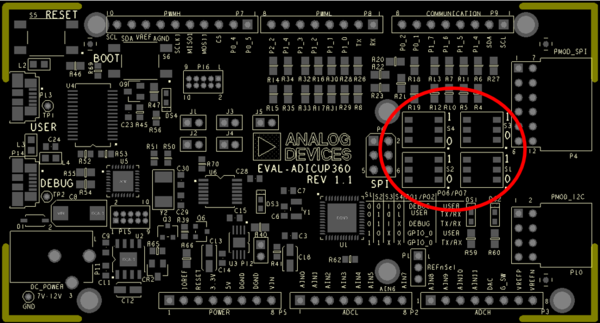 
The S1, S2, S3, S4 switches are used to route the P0.1/SCLK1/SCL/SIN, P0.2/MOSI1/SDA/SOUT, P0.6/IRQ2/SIN and P0.7/POR/SOUT pins when they have been assigned a UART function to either the Arduino I/O and the PMOD connectors or to the Virtual Serial ports implemented via the USER USB or the DEBUG USB connectors. Each pin can be routed separately, but the routing is usually done for the pairs TxD/RxD.

Most commonly used configurations are given in the table below. For any other more 'exotic' configuration, consult with the Schematics and the Layout of the board.


Here is the schematic of the switching network, the switches allow to route the P0.1/P0.2 and P0.6/P0.7 signals to multiple connector depending how you want to configure the pins. Above are the common configurations, but for complete details please reference the diagram.


The EVAL-ADICUP360 base board provides two buttons RESET and BOOT.