The ADXL355 accelerometers offer guaranteed temperature stability with null offset coefficients of 0.15mg/C (max). The stability minimizes resource and expense associated with calibration and testing effort, helping to achieve higher throughput for device OEMs. In addition, the hermetic package helps ensure that the end product conforms to its repeatability and stability specifications long after they leave the factory.

With output of ±2g to ±8g full scale range (FSR), selectable digital filtering from 1 Hz to 1 kHz, and low noise density of 25µ/√Hz at less than 200µA current consumption, ADXL355 MEMS accelerometer offers performance level comparable to much more expensive devices with less power consumption and BOM cost. For general board details and to buy a board please visit the EVAL-ADXL355-PMDZ product page. 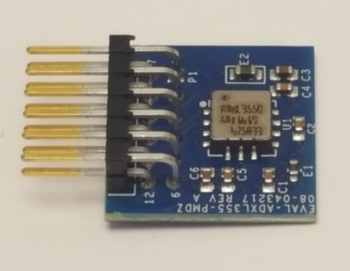 The PMOD board is small in size with dimensions approximately 1 inch in width by 1 inches in length. There are a few sections on the hardware I'd like to point out for you, in order to use the board.

In order to use the EVAL-ADXL355-PMDZ with the ADICUP360, the user MUST remove resistor R1. The ADXL355 holds the DATA_RDY pin low during powerup, and that holds the EVAL-ADICUP360 in UART boot mode. When this mode is active the MCU will stay in standby mode till it receives the proper command, effectively making the ADuCM360 not run. So to avoid this, please remove R1 and note that you can't use the DATA_RDY pin with the ADICUP360

When using the ADXL355 PMOD board, the 3.3V power for the PMOD comes directly from the host board it is connected to. The power from the host is generally capable of providing up to 100 mA at 3.3V, but for complete PMOD power specifications please clickhere.

The specific interface used for the EVAL-ADXL355-PMDZ boards is the extended SPI. In general ADI has adopted the extended SPI connector for all PMOD devices which have an SPI interface. It provides flexibility to add interrupts, general purpose I/O, resets, and other important digitally controlled functions. 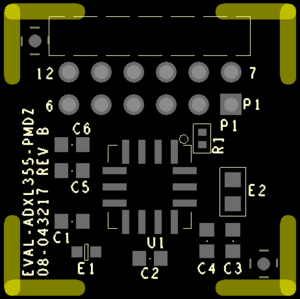 The EVAL-ADXL355-PMDZ has two interrupt pins and a data ready pin which can be used as external indicators for the user. The interrupt pins can be programmed through software to reflect various status flags within the ADXL355, and those pins are accesible through the SPI PMOD header. For complete details on the individual status flags, what they mean, and how to program the chip to reflect those interrupts, please consult the datasheet at ADXL355.