EV-GEAR-EXPANDER1Z is a “Gear” (expansion add-on board) for MCU Cogs (EV-COG-AD3029LZ & EV-COG-AD4050LZ). This gear is designed for quick prototyping and bread boarding.

This user guide describes the connectors details and jumper settings. 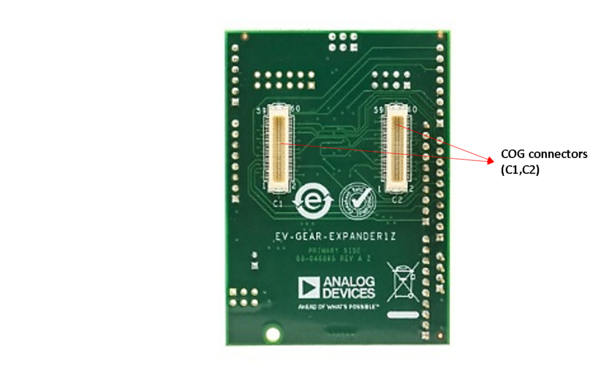 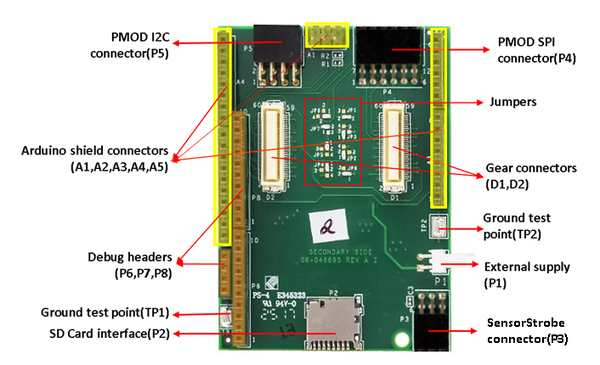 The board consists of

The COG connectors C1 and C2 interface the EV-GEAR-EXPANDER1Z board with MCU Cog. The connector carries all the GPIO signals from the MCU Cog board. The pinout details are given in the expander connector section in EV-COG-AD3029LZ wiki.

The connectors D1 and D2 can be used to connect a Gear. Gear is an addon application board which can be a custom build to serve the required application.

The pinout details for D1 and D2 are same as that of COG connectors ( C1, C2 expander connector section in EV-COG-AD3029LZ wiki).

The headers A1, A2, A3, A4 and A5 support the shields that are Arduino Uno compatible. The following table captures the signals connected to the headers

The EV-GEAR-EXPANDER1Z board offers connectors with PMOD SPI, PMOD I2C and PMOD IO/SensorStrobe interfaces. Any PMOD peripheral module with PMOD SPI or PMOD I2C interface can be directly plugged into these connectors. The host MCU communicates to the modules by means of SPI or I2C. The Sensorstrobe connector is a custom connector which provides access to ADuCM3029/ADuCM4050 SensorStrobe signals and few other GPIOs. The pinout details of the PMOD connectors are given below.

The Debug headers P6, P7 and P8 can be used to probe certain MCU GPIOs. The headers consist of male and female pins. The following table captures the pinout.