The EVAL-ADPD410x-ARDZ allows users to take advantage of the flexibility of the ADPD4100 and ADPD4101 as multimodal sensor front ends to a wide range of applications. One example of a specialized application is the CN0503, a reference design for optical water quality measurement. This demonstration shows how to perform fluorescence measurement using the EVAL-ADPD410x-ARDZ, similarly to the CN0503 Fluorescence Measurement Demo.

This demo uses a lot of the optical, mechanical, and photodiode and LED components from the CN0503 kit. This demo is especially prepared to show the ability of the EVAL-ADPD410x-ARDZ board to perform the same measurements as the CN0503. For a less complex demo setup, refer to the Turbidity Demo.

Light is emitted from an LED at 365 nm wavelength. It then passes through a beam-splitter, which directs some of the incident light to a reference photodiode detector for sampling. Quinine in the sample fluoresces due to the 365 nm light and emits ~450 nm light. Another photodiode detector, sensitive to blue light frequencies, is positioned at 90 degrees from the light path to measure the intensity. This placement decreases the effects of the light emitted from the source LED. Additionally, a monochromatic filter is placed in front of the detector to further isolate the measurement. 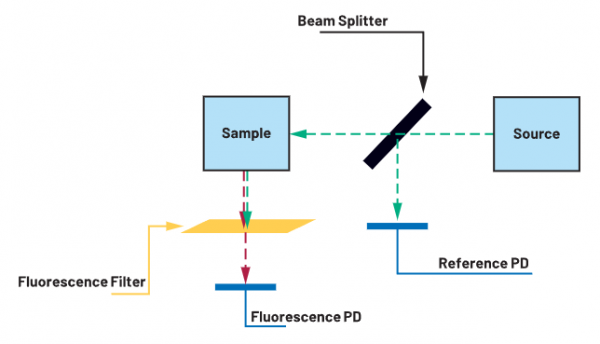 The following is a list of items needed to replicate this demo.

Configure the onboard jumper header and solder jumper connections, as shown below. 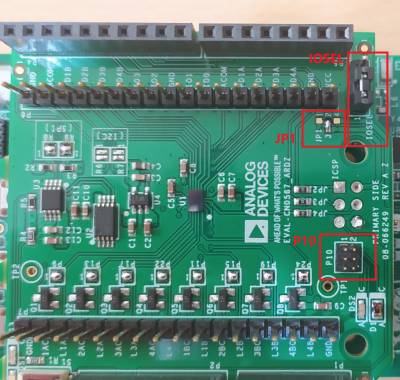 Set the following EVAL-ADICUP3029 switches according to their configuration on the table below.

Connect the EVAL-ADPD410x-ARDZ to the EVAL-ADICUP3029 using the headers, as shown below. 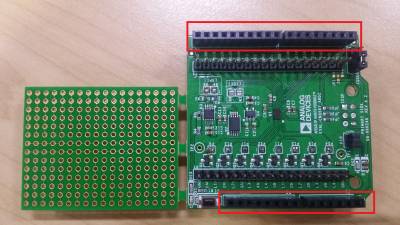 Connect the EVAL-ADICUP3029 to the PC using the micro USB to USB cable. Drag and drop the appropriate .hex file from the list below to the Daplink Drive. (See driver-/-firmware-setup)

The latest source code can be found here:

The demo utilizes an optical path similar to the one used by CN0503, but only for a single channel. The single path base and cuvette holder are available as 3D-printable designs () and can also be ordered using Shapeways. 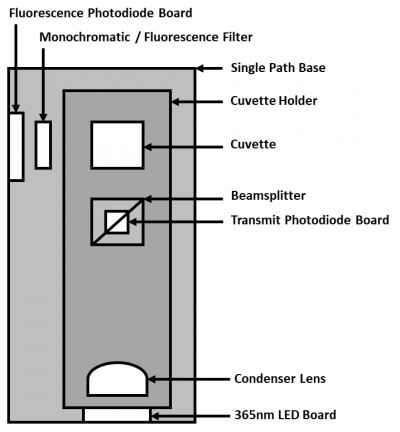 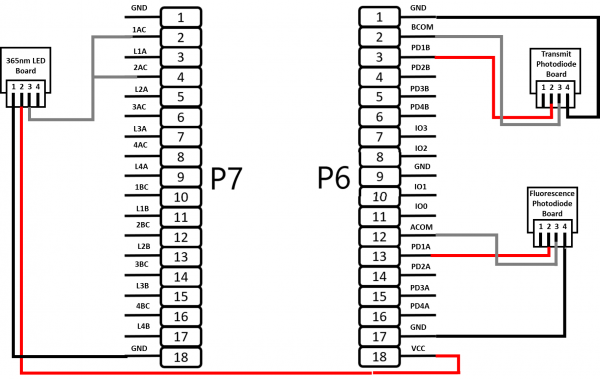 This demo uses a PyADI-IIO example script. See Software Setup for the complete installation instructions from libiio to pyadi-iio.