CN0566 is a phased-array beamforming antenna demonstration platform that allows the user to experience the principles and applications of phased array antennas.

The RF input signal is received from an onboard 8 element patch antenna that operates from 10 to 10.5 GHz. Each antenna element is input to an ADL8107, a low noise amplifier (LNA) that operates from 6-18GHz with 1.3dB NF and 24 dB gain. The output of these amplifiers are fed into the main core of this circuitry, two of the ADAR1000. The ADAR1000 is an 8 GHz to 16 GHz, 4-Channel, beamformer that allow per-channel, 360° phase adjustment with 2.8° resolution and 31dB gain adjustment with 0.5dB resolution. The ADAR1000s are capable of bidirectional, half-duplex operation. However, CN0566 only connects the ADAR1000 receive paths. The outputs of four LNAs get phase and amplitude shifted by an ADAR1000, then summed together at its RFIO output. 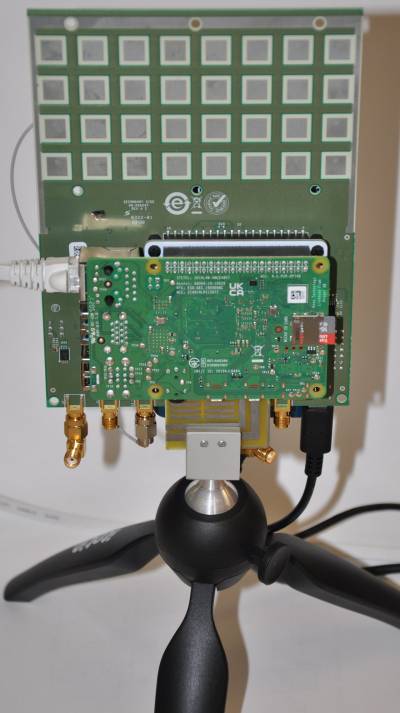 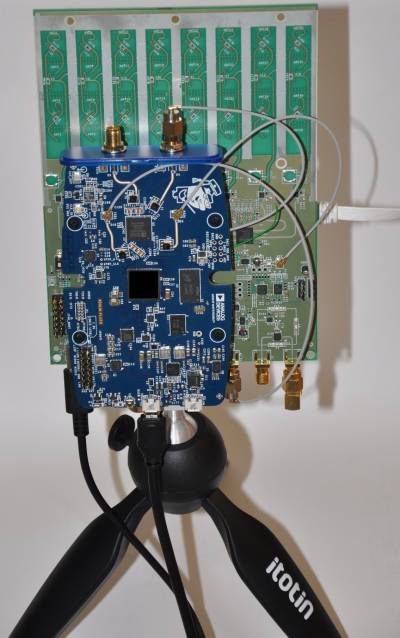 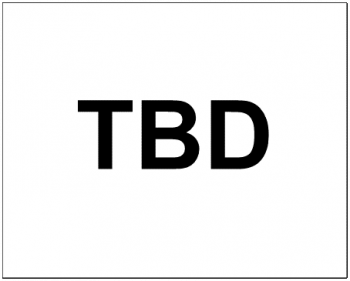 The CN0566 has jumper headers which configure different settings as shown below. Also, the default shunt positions are highlighted.

EEPROM_ID sets the EEPROM I2C address. It consists of P4, P5 and P6 solder jumpers connected respectively to A2, A1 and A0 address selection pins of U7. The default address configuration is “111”. This EEPROM I2C address is configurable from 001 to 111. It cannot be set to “000” since U4 already uses this address for RPi HAT identification.

Setting up and Connecting the Raspberry Pi

The output display of the system will be through an external monitor with HDMI capability. To do this, connect the micro HDMI to HDMI adapter on the Raspberry Pi 4 HDMI port. Connect this to the monitor via the HDMI to HDMI cable. 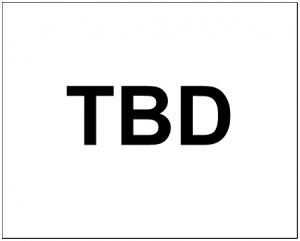 Figure 7. Hardware connection of Input Devices to Raspberry Pi
Raspberry Pi connects to the EVAL-CN0508-RPIZ through P2 which is a 40-pin connector. You may do this directly by connecting the RPi on the bottom side of the connector or through a 40-pin ribbon cable.

A Pluto Rev C or higher is required. For the CN0566, a custom firmware image is used that incorporates a TDD engine and additional control signals.

REMOVE this when it's got a proper home on Github releases
The first step is to update the firmware to the latest release, following the procedure at:\ Pluto/M2k Firmware Updates. Make sure to upload the entire zip file, not the pluto.frm contained within.
Next, download and unzip the updated firmware image, located here:
pluto_dw_march_16_2022.zip

(Yes, unzip, UNlike upgrading to the latest release.)
Drag and drop the pluto_DW_feb_7_2022.frm to the Pluto mass storage device, then eject.

The next step is to update the Pluto configuration to enable the AD9361's second channel. Follow the directions at:
Updating to the AD9364,
For setting the mode of a Rev. C PlutoSDR to 2r2t, the following would be sequence of commands:

Verify that the configuration was programmed properly by entering the following commands:

In order to control the CN0566 from the Raspberry Pi, you will need to install ADI Kuiper Linux on an SD card. Complete instructions, including where to download the SD card image, how to write it to the SD card, and how to configure the system are provided at Analog Devices Kuiper Linux. Pay particular attention to the localization settings, keyboard settings, etc. if you will be running examples on the Raspberry Pi itself (versus remotely.)


Write the image and follow the system configuration procedure.

After burning the image above, log into the Raspberry Pi and open the Raspberry Pi configuration utility.
Set the hostname to “phaser”, set the locale, keyboard, and wifi country (if you'll be connecting to your network by wifi.) Next, run the following commands (and take a look at the setup script if you're suspicious, and note that there may be some updates as newer versions of Kuiper Linux are released.)

SKIP AHEAD to running the example, or see below for details of what just happened.


Or alternatively, follow the Hardware Configuration procedure under Preparing the Image: Raspberry Pi in the Analog Devices Kuiper Linux page, adding the following lines to the very end of /boot/config.txt:

If you will be logging in via VNC, comment out the following line, and set the HDMI group and mode accordingly:


REMOVE this when merged:
For now - the CN0566 GUI and required pyadi-iio additions are in a development branch. The pyadi-iio that is pre-installed on Kuiper needs to be cleanly removed and replaced. Run the following commands:

At this point, the GUI can be run from the command line. Run the following commands:

The GUI should load and begin displaying the beam pattern as shown below. 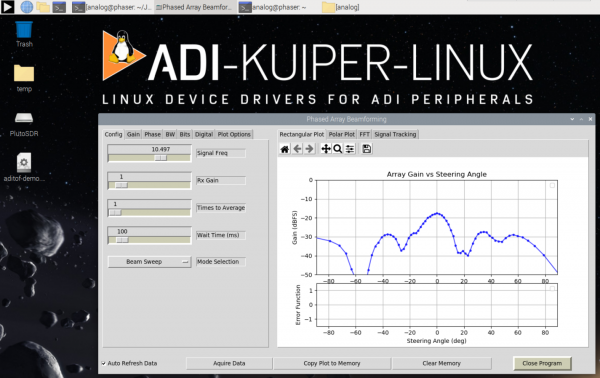 The phaser board is initially uncalibrated; each element will have a slightly different gain and slight phase error due to numerous factors. the cn0566_examples.py script provides a calibration utility that will generate calibration files. Make sure an antenna is attached to J1, and is facing straight at the antenna array from approximately 1.5m away. Then run:

The script provides debug information and plots as it is running, you may have to close out of each plot for the script to proceed. After running this script, files gain_cal_val.pkl and phase_cal_val.pkl will be placed in the working directory. The GUI program will also load these files automatically. 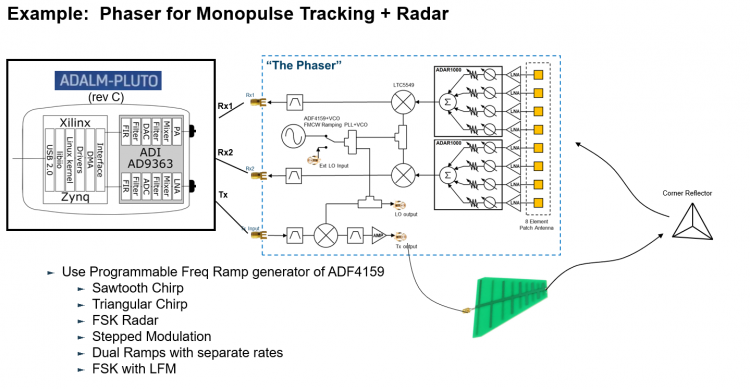 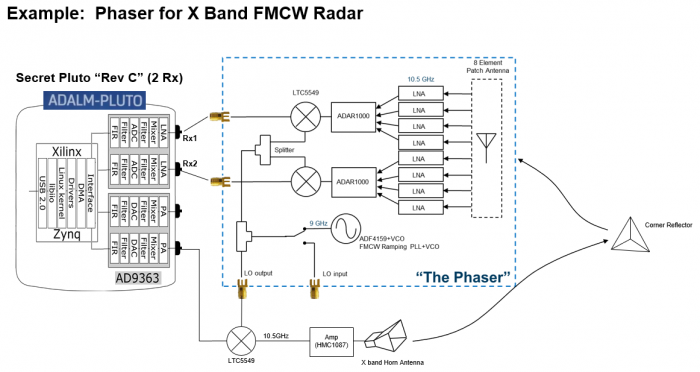