The purpose of this lab is to get acquainted with how the software controls and captures data from the Phaser hardware. You COULD skip forward to the calibration section in this lab, which is prerequisite for the subsequent labs, but eventually you may want to write your own custom software, or at least modify the provided example scripts. Rest assured, very little software knowledge is required to understand this lab; it is intended to be the Phaser equivalent of “Hello, World!”
Make sure that the Phaser hardware and software is set up according to Phaser Overview and Setup.

There are two distinct ways to use the Phaser setup:


Most of the scripts only examine a few MHz worth of bandwidth at a time, while the HB100 frequency can vary by several tens of MHz. Thus it is essential to know the frequency of the source. The cn0566_find_hb100.py script sweeps several 10 MHz wide bands and attempts to locate the peak frequency. Open the script in Thonny and run it. (The script can also be run from the command line if preferred.) Typical results are shown in Figure 1.

Ideally, there should be a single, sharp peak. If there are several peaks or no visible peak, close the plot and enter 'n' at the prompt. Reposition the HB100 (and make sure there are no other sources nearby), then re-run the script. Another method to ensure that the correct source is being identified is to run the script several times, moving the HB100 toward or away from the antenna. The peak should increase and decrease accordingly. Once the correct peak has been identified, enter 'y' at the prompt as shown in Figure 2. This will save the frequency to a calibration file that other scripts and GUIs will read in.

Aim the HB100 at the Phaser.
Open the cn0566_minimal_example.py script, either in Thonny, or run from the command line.
Observe the output, which should look similar to the figure below: 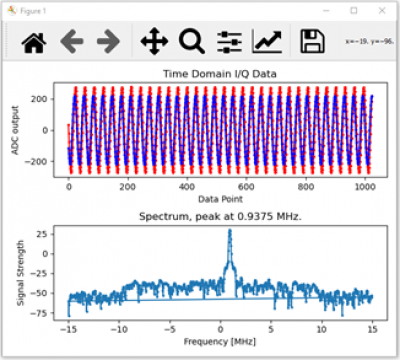 
So what does that Python script do?? The python script, “cn0566_minimal_example.py” first takes care of some housekeeping operations - set the antenna to zero phase, equal gain on all elements, and set a few parameters in the Pluto SDR. Then we are simply plotting the buffers of data from Pluto.
Next, change the “offset” variable (line 176) to something between -10e6 and +10e6 (your choice!). Re-run the script and verify that the tone moves along the horizontal axis accordingly.

The phaser board is initially uncalibrated; each element will have a slightly different gain and slight phase error due to numerous factors. This was fine for finding the HB100 frequency and the minimal example, but the performance of the subsequent labs requires that each element have a predictably controllable gain and phase, with respect to other elements in the array. Since there will always be both gain and phase mismatch due to manufacturing tolerances, we'll compensate for this in software.

For the gain calibration, we'll illuminate the array with the HB100 held far away, and at mechanical boresight (zero degrees). One element at a time will be set to its maximum gain, which is done by setting the ADAR1000 gain for the associated channel. All other elements are set to zero. The resulting signal level for each element is measured, and the element with the minimum gain is chosen as a reference. A factor is then calculated for the other elements, which are used to equalize their gains to that of the lowest gain element.

For the phase calibration, two adjacent elements are set to the maximum calibrated gain. The phase of one of the elements is then swept from 0 to 360 degrees. The phase that produces the minimum null is 180 degrees away from the phase that will match the two elements (nulls are much sharper than peaks, and can be measured more accurately.) Each adjacent pair is measured, and an array of phase compensation values is generated.

The cn0566_examples.py script provides a calibration utility that will generate calibration files. Place an HB100 (or antenna connected to J1) facing straight at the antenna array from approximately 1.5m away. Then run:

The script provides debug information and plots as it is running, you may have to close out of each plot for the script to proceed. Calibration is not an exact science, and is subject to noise, interfering signals, reflections from nearby objects, and other impairments. But in general, plots from an acceptable calibration run will have the following features:

Typical plots are shown in Figure 3.

After running this script, files gain_cal_val.pkl and phase_cal_val.pkl will be placed in the working directory. The GUI program will also load these files automatically.
If plots differ greatly from Figure 3, examine the physical setup, reposition the source or antenna, remove interfering objects, and re-run the script.