The output data rate is adjustable from 9.1 sps to 90.9 sps, with the 16.1 sps setting providing strong rejection of both 50Hz and 60Hz power line noise. The CDC also provides temperature measurement with a resolution of 0.1°C and accuracy of ±2° C for temperature compensation and system calibration.

The Digital communication on the EVAL-CN0552-PMDZ is accomplished using a new standard I2C PMOD port.

Similarly, utility software such as iio_info, IIO Oscilloscope, PyADI-IIO, and etc. can be used for both the EVAL-CN0552-PMDZ on Raspberry PI and on ADICUP3029. 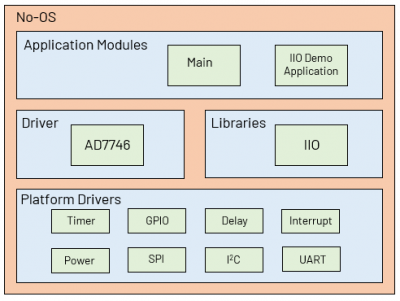 The following is the list of items needed in order to replicate this demo.

There are two basic ways to program the ADICUP3029 with the software for the CN0552.


Using the drag and drop method, the software is going to be a version that Analog Devices creates for testing and evaluation purposes. This is the EASIEST way to get started with the reference design.

Importing the project into CrossCore is going to allow you to change parameters and customize the software to fit your needs, but will be a bit more advanced and will require you to download the CrossCore toolchain.

To build the project from the source, follow the instructions in the no-os wiki.

The EVAL-CN0552-PMDZ can be used with a Raspberry Pi.

In order to control the EVAL-CN0552-PMDZ from the Raspberry Pi, you will need to install ADI Kuiper Linux on an SD card. Complete instructions, including where to download the SD card image, how to write it to the SD card, and how to configure the system are provided at Kuiper Linux.
Write the image and follow the system configuration procedure.

Follow the Hardware Configuration procedure under Preparing the Image: Raspberry Pi in the Kuiper Images page, substituting the following lines in config.txt:

Below is a copy of the device tree overlay:
rpi-cn0552.dtbo

Do note that this overlay won't be needed in a subsequent Kuiper release.

To set up the circuit for evaluation, consider the following steps: 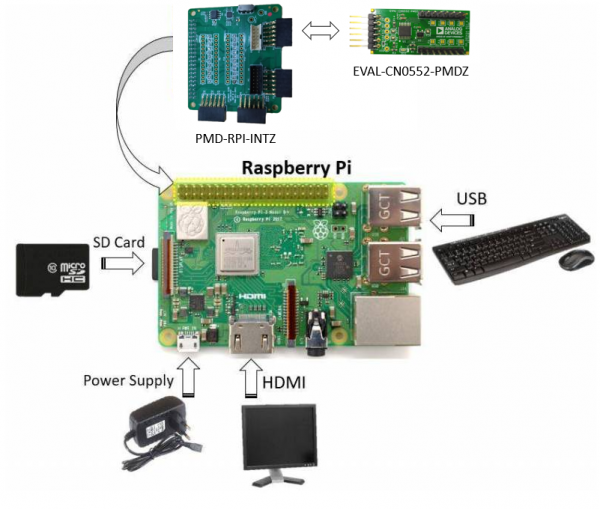 Software (both ADICUP3029 and Raspberry Pi)

To be able to connect your device, the software must be able to create a context. The context creation in the software depends on the backend used to connect to the device as well as the platform where the EVAL-CN0552-PMDZ is attached. Two platforms are currently supported for the CN0552: Raspberry Pi using the ADI Kuiper Linux and the ADICUP3029 running the no-OS AD7746 demo project. The user needs to supply a URI which will be used in the context creation.

The Libiio is a library for interfacing with IIO devices.

Install the Libiio package on your machine.

The iio_info command is a part of the libIIO package that reports all IIO attributes.

Upon installation, simply enter the command on the terminal command line to access it.

Do note that the Windows machine and the RPI board should be connected to the same network in order for the machine to detect the device.

For Windows machine connected to ADICUP3029:

There are different commands that can be used to manage the device being used. The iio_attr command reads and writes IIO attributes.

The iio_reg command reads or writes SPI or I2C registers in an IIO device. This is generally not needed for end applications, but can be useful in debugging drivers. Note that you need to specify a context using the -u qualifier when you are not directly accessing the device via RPI or when you are using the ADICUP3029 platform. 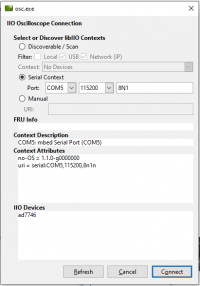 Below is the Debug panel of AD7746 wherein you can directly access the attributes of the device. 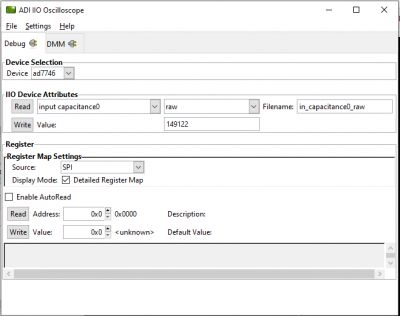 Access the DMM panel to see the instantaneous reading of the input capacitances and the device temperature. 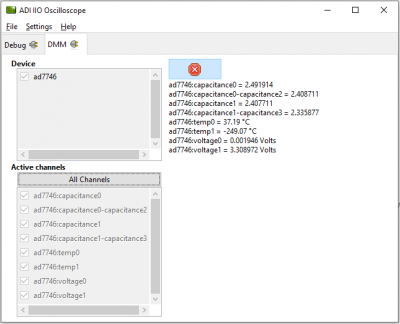 PyADI-IIO is a python abstraction module for ADI hardware with IIO drivers to make them easier to use. This module provides device-specific APIs built on top of the current libIIO python bindings. These interfaces try to match the driver naming as much as possible without the need to understand the complexities of libIIO and IIO.

Follow the step-by-step procedure on how to install, configure, and set up PYADI-IIO and install the necessary packages/modules needed by referring to this link.

After installing and configuring PYADI-IIO in your machine, you are now ready to run python script examples. In our case, run the ad7746.py found in the examples folder.

Press enter and you will get these readings. 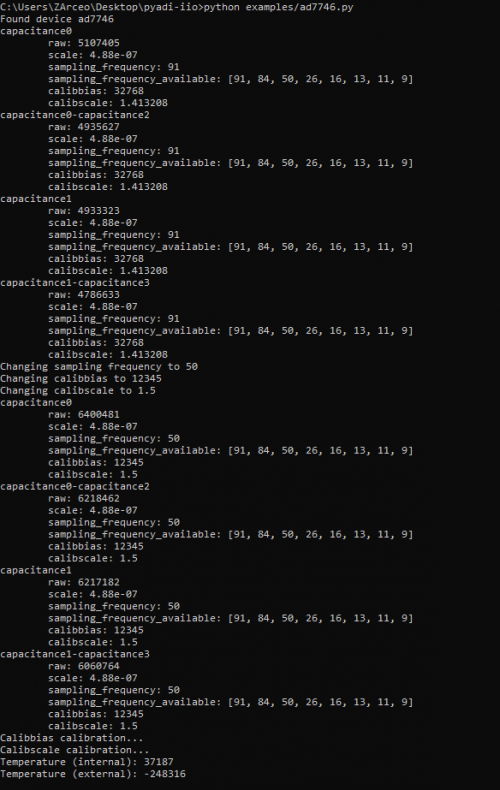