The 5.8 GHz band is preferred for short range digital communication applications (such as WiFi) because of the number of channels and the bandwidth available. While the transmission range is short-er than that of the 2.4 GHz band, its 150 MHz bandwidth accommodates up to 23 non-overlapping WiFi channels. Additional com-mon uses include software defined radio, wireless access points, public safety radio, wireless repeaters, femtocells, and Long-Term Evolution (LTE)/Worldwide Interoperability for Microwave Access (WiMAX)/4G, base transceiver station (BTS) infrastructure.

This design provides high gain, robust overpower monitoring, and protection all in a small footprint, which is a great addition to any ISM band application where low signal strength or distance may be a complication.

The circuit is a high performance RF receiver system with +23 dB of gain, optimized for operation at a center frequency of 5.8 GHz. The input is unfiltered, maintaining a noise figure of 2 dB, while a bandpass filter at the output attenuates out-of-band interferers.

The circuit includes a high speed overpower detector and switch that protects sensitive downstream equipment connected to the receiver system. The receiver system also automatically returns to normal operation when the RF power level drops within the acceptable range. The RF inputs and outputs are standard SMA connectors, and the entire design is powered from a single micro USB connector. 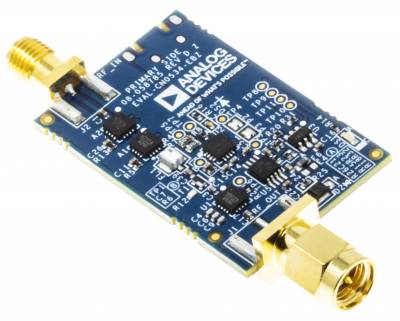 LED, DS1 from CN0534, will automatically turn on indicating that the CN0534 is powered and operational. If the LED is off, the CN0534 could still be powered properly, but the RF input power into the amplifier might be activating the automatic shutdown, so try to lower the RF input signal by 10dB and see if the LED turns on.

The SMA connectors are used for the RF input and output connections.

The ADALM-Pluto can be configured using an IIO Oscilloscope, visit the website on 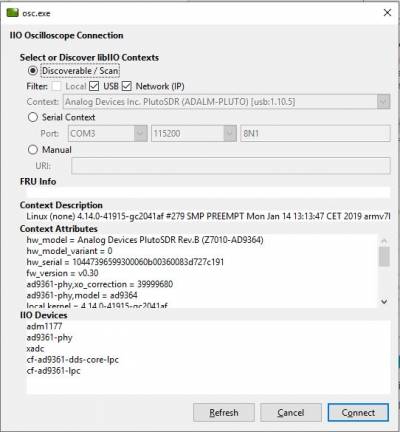 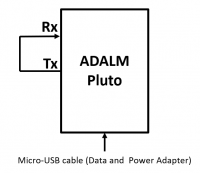 The plot shown below is the ADALM Pluto output with the RF TX and RX connected directly with transmit power set to -30 dBFS producing a 63.5 dB RSSI RF power input reading: 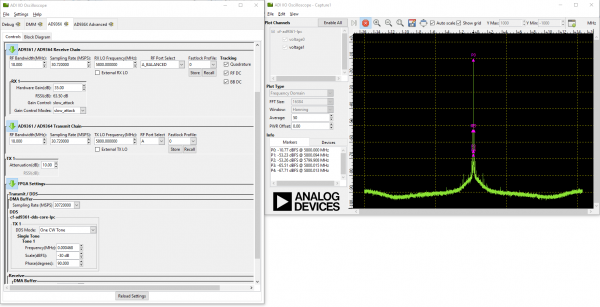 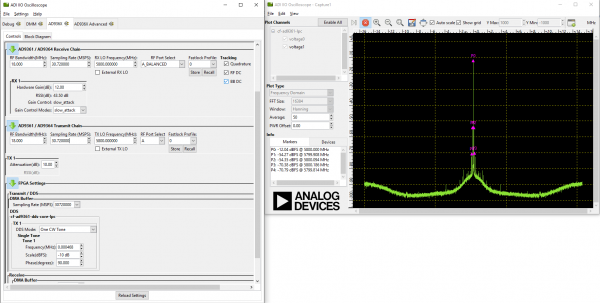 The plot is as shown below with transmit power set to -30 dBFS producing a 41.5 dB RSSI RF power input reading providing a gain of 22dB in reference with the loop back test operation: 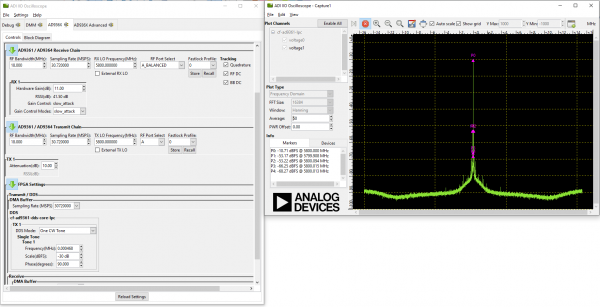 The plot is as shown below with transmit power set to -10 dBFS producing a 40.25 dB RSSI RF power input reading and showing a 20 dB attenuation in reference with the loop back test operation: 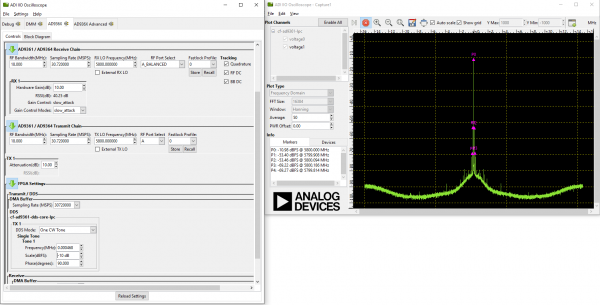 Connecting the EVAL-CN0534-EBZ Board directly to the input (Rx) of a radio or other piece of RF equipment may exceed the absolute maximum ratings for the RF Input. (which is +2.5 dBm for the ADALM-PLUTO). Doing this may permanently damage the input.

Never do this in normal operation.