Fluorescence occurs when the electrons of certain chemical compounds are excited by beam of light causing them to emit light at a different and typically longer wavelength. The intensity of the emitted fluorescent light is linear for a broad range of concentration of the substance. The method of measuring fluorescence intensity to obtain the concentration of the material is advantageous over standard colorimetry due to its specificity and resistance to noise. Since only the target chemical compound emits light at a different wavelength, using a detector or optical filter which detects or passes narrowband light centered at that wavelength decreases interference from the source or incident light.

The CN0503 is a four-channel optical platform capable of fluorescence, absorbance and scattering measurements for liquid solutions. Getting the concentration of a compound in a liquid solution using fluorescence involves either directly measuring the emitted light from the compound or from an added a reagent which introduced fluorescent material proportional to the concentration of the target compound. The sensor used is the fluorescence photodiode placed perpendicular to the light path from the source LED. This photodiode is sensitive to longer wavelength light than the transmit photodiode placed directly in the light path. Its position and spectral sensitivity help to remove any interference from the source LED to the fluorescent light samples. Additionally, an optical fluorescent filter (narrowband longpass filter) is inserted in the slot in front of the sensor to further isolate fluorescent light from noise.

The demo shows how directly measuring fluorescent light from tonic water indicates the presence and level of quinine. Directing 365nm wavelength light to tonic water causes the quinine in the solution to fluoresce blue light at around 450nm. The intensity of light that fluoresces from quinine is proportional to its concentration at low levels.

Before starting with these steps, please check the Hardware User Guide for the steps to assembling the CN0503. Additionally, please check the Software User Guide for the steps in setting up the firmware and the Quick Setup Guide for running the software. This demo assumes that you already have an assembled board with a working firmware already programmed on the EVAL-ADICUP3029 and a ready-to-run software in the host computer.

Configure the onboard jumper shunt connection as below:

You can use either path 1 or 4 for fluorescence measurements. The steps outlined here will use path 1, and setting LED1, P1ASEL, and P1BSEL.

Optionally, you can set the unit displayed in the plot to g/L by writing this in the primary unit field of path 1 found by clicking the Advanced button in the Settings window.

The configuration file in (cn0503_defaults_fluorescence.zip) has already been set up to include everything in this section to calculate the concentration of quinine. There is no need to perform the steps below unless to make changes in the calculation.
The number of significant digits of the coefficients of the polynomial equation is crucial to the accuracy of the approximation. However, the CN0503 also has an 80-character limit for each command. It is recommended to use a 3 decimal digit scientific notation for the coefficients. 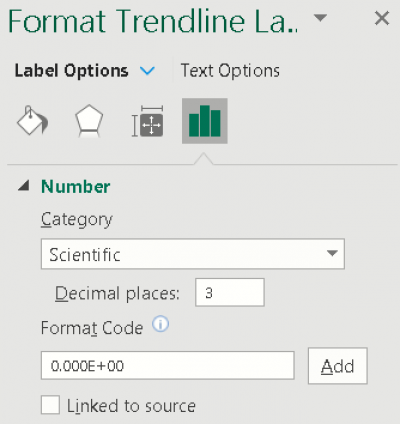 The polynomial approximation is applied to the CN0503 using the DEFX INS0 or DEFX INS1 command (See the Software User Guide for more details on this). With this, the CN0503 will now calculate quinine concentration from real-time intensity samples.