CN0410 is an Arduino compatible shield that is optimized for smart agriculture to control current passing through LED's. The CN0410 is used along the the CFTL-LED Bar that has LED's with specific wavelengths that plants utilize.


The circuit shown below is a complete 3-channel single-supply, 16-bit unbuffered voltage output DAC that maintains ±2 LSB integral and differential nonlinearity by utilizing a CMOS DAC. This circuit has a voltage to current conversion that controls the amount of current passing through an LED by using a MOSFET in its configuration. The circuit also has an isoSPI repeater that allows multiple boards to be controlled with a single master. 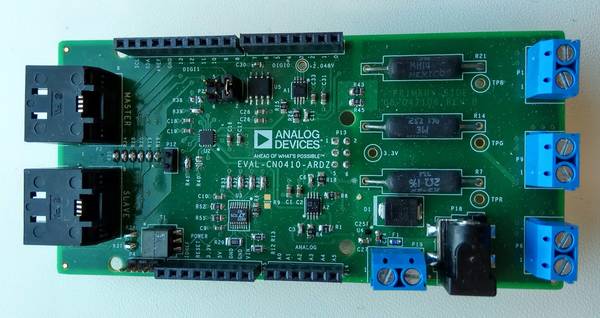 The chip select pin of the AD5686 is hardware configurable and routed to 3 general purpose I/O pins on the board. Use the table below to change the location of the chip select simply by moving the shunt on P21, and ensuring the software is configured the same way. By default the chip select is located on GPIO 10. This feature allows multiple boards using SPI communications protocol to be stacked on top of each other.

The software for EVAL-CN0410 does not require any particular configurations in order to setup the application. The only setting that the user could make would be the selection of the CS pin. This can be done by modifying the SYNC_PIN inside adi_cn0410.h.

After the application starts the user can send commands to set the output of the DAC channels. Available commands: 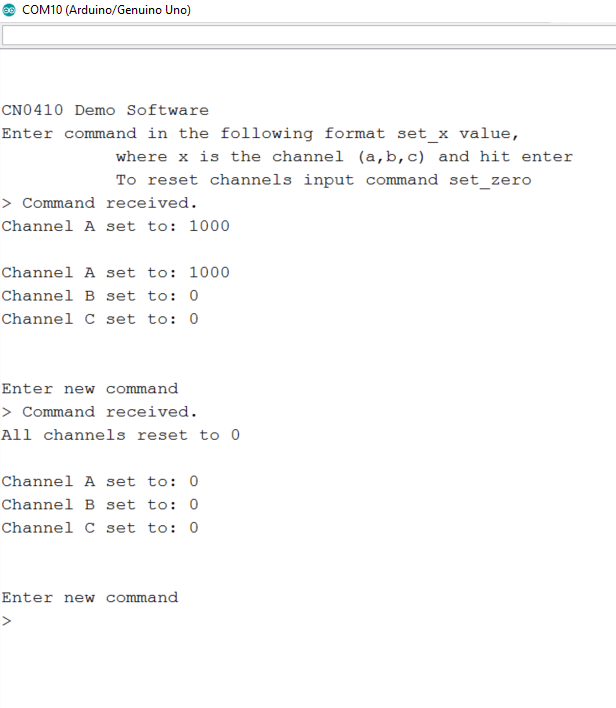 Once the hardware and software is configured, user needs to follow on screen instructions to run EVAL-CN0410 demo.

We recommend not opening the project directly, but rather make a local copy in your workspace and open it using Arduino/Genuino IDE.

The source code and include files of the CN0410_example can be found here:

All files are in the same folder as the .ino file and include the source and header files related to CN0411 software application that implement the CLI interface and functionality.