The CN0216_example is a weigh scale measurement demo project for the Arduino Uno base board with additional EVAL-CN0216-ARDZ shield, created using the Arduino IDE.

The CN0216_example project uses the EVAL-CN0216-ARDZ shield which is a precision weigh scale system using a 24-bits sigma-delta converter, and auto-zero amplifiers providing high gain for the bridge sensor input 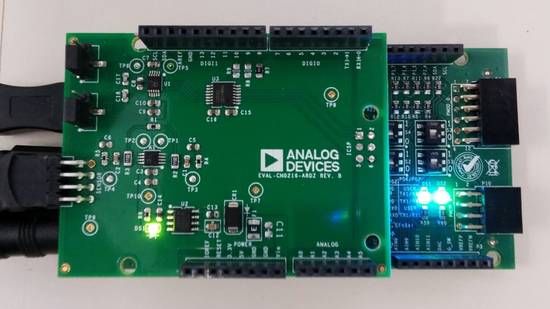 The CN0216 circuit translates the resistance changes on the bridge into very small voltages. The bridge is excited by a regulated 5V and that determines the full scale range of the bridge output. Those values are passed through very low noise, auto zero amplifiers to remove as many error sources as possible before being gained up to levels that will be compatible with the ADC. The 24-bit ADC value is received via SPI interface of the EVAL-ADICUP360 board. 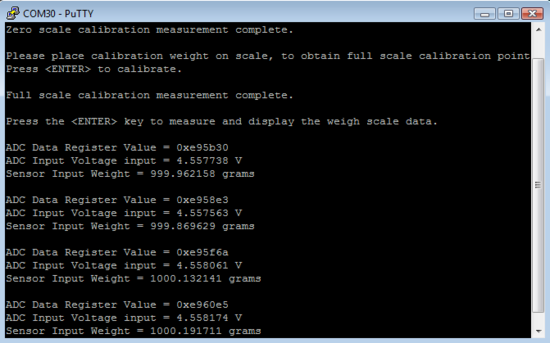 
Once calibration is complete, measurements of the output values (weights and conversion information) are displayed every time you press <ENTER> key from the keyboard. Measurements should be between the lower and upper calibration limit can be made at the beginning of the program.

Extremely important to plug in an acceptable power supply to the power jack for the EVAL-CN0216-ARDZ. The boards will not work if you try only to power it from the USB.

The source code and include files of the CN0216_example can be found here:

The Arduino Sketch is used to load the example into Arduino IDE. The project is composed of three main parts:

There are no software configurations for this particular project.

You may need to configure the serial terminal depending on the current settings of the Arduino IDE. Make sure the settings are as follows:

The Arduino tools are easy to use, and there are many tutorials and users guides to help learn how to use the Arduino IDE.

For more information on how to use the tool basics, please check out the Arduino tutorials page.