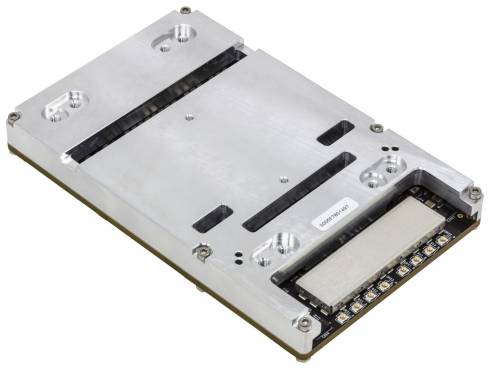 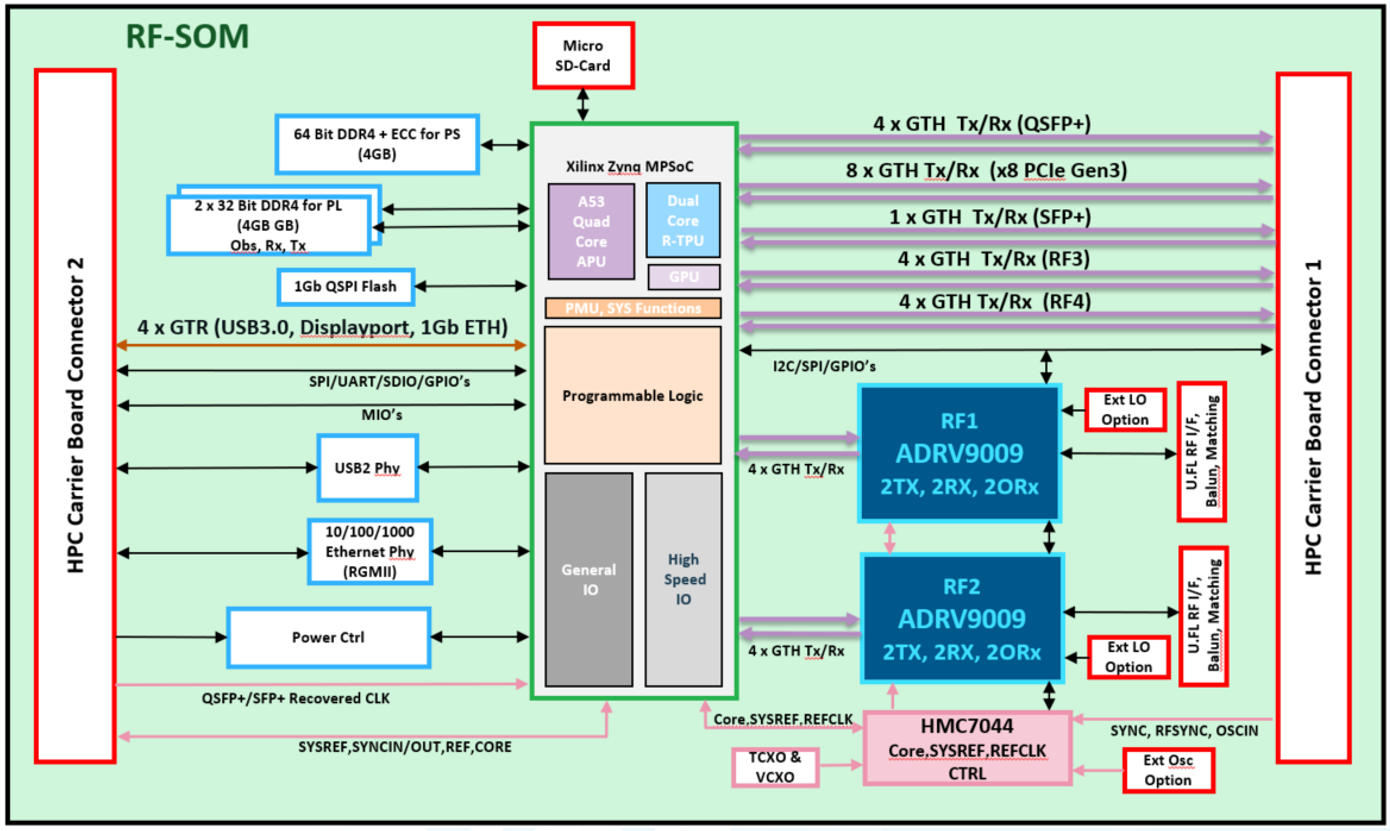 The interface of the ADRV9009-ZU11EG consists of two SAMTEC SEARAY™ 400-pin female connectors P1 and P2. Following signals are present:

A detailed description of the connector interface for the complete system ADRV9009-ZU11EG and ADRV2CRR-FMC is located here: ADRV9009-ZU11EG_Connector_Pinout

The ADM1266 voltage sequencer/supervisor is used to handle following tasks:

The two fault signals PWR_FAULT1 and PWR_FAULT2 are open-drain active high signals with internal 4.7K pull-ups to 1.8V. These are controlled by the ADM1266 as previously mentioned. The purpose of the fault signals is to prompt that either temperature or input voltage are close to the limit, and a power down is imminent. Once power is turned off the state of the fault signals will reset, and the cause of the shutdown can be found only by accessing the ADM1266 Blackbox.

The RF-SOM uses the two power good signals, PG_SOM and PG_ALL, to ensure a correct power-up timing for the internal circuitry. While PG_SOM is an output controlled by the on-board ADM1266, PG_ALL is an input and must be asserted by the carrier. Both signals are active high open drain signals, with on-board pull-ups to 1.8V. The diagram below shows the power good sequence at start-up:

Following tools are needed to read the Blackbox records:

The image below shows how to connect the I2C USB dongle to P19 on the ADRV2CRR-FMC carrier board. 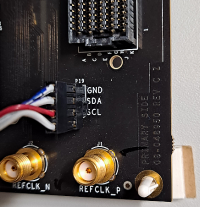 After connecting the I2C cable open the ADI Power Studio software, connect to the dongle and open the ADRV9009-ZU11EG RF-SOM project located below. The Blackbox Records can be accessed from the Monitor menu.

The RF-SOM has an on-board Marvell 88E1512 10/100/1000 Mbps Ethernet PHY connected to the GEM3 Controller in the PS on the Xilinx ZU11EG. The MDI signals are available in the interface connector P2.

The ADRV9009-ZU11EG features both USB 2.0 and USB 3.0, configured in host, device or OTG mode. For USB 2.0 there is an on-board USB3320 ULPI transceiver connected to USB0 controller on the ZU11EG Zynq Ultrascale+. For USB3.0 the I/O path runs through the PS-GTR transceivers.

The PS Multiplexed IOs (MIO) give access to the low speed interfaces inside the Zynq Ultrascale+. The IO voltage level on all MIO pins is 1.8V. For other voltages external voltage level are required.

Programmable logic high performance banks 65, 67 and 68 are fully accessible in connector P2. Prior of using these signals the bank supply VCCO must be provided, with a voltage between 0.95V and 1.9V. A reference voltage must be applied as well, if the IO standard requires one. To use the internal VREF voltage a 500 or 1KOhm resistor needs to be connected from VREF pin to ground.

Alternatively, some of the IOs in bank 89 AD12P/N to AD15P/N can be used as ADC inputs for the ZU11EG on-chip System Monitor. The internal 1.25V reference is used. The analog input range for unipolar operation is 0… 1V. For bipolar operation the differential voltage is between -0.5V … 0.5V, with the common-mode voltage 0.5V.

The ZU11EG on-chip SD Controller is compatible with SD memory card specification version 3.01, supporting UHS-I speeds and SDXC capacity format. The RF-SOM includes an on-board uSD card connector, but provides the possibility to place an SD card connector on the carrier. An on-board multiplexer is able to switch between the two connectors. SD IOs and SDIO_SEL signal are available in connector P2. Leave SDIO_SEL floating for uSD on RF-SOM. Pull SDIO_SEL to ground for using the SD on the carrier.

This chapter shows the connections to the ADRV9009-ZU11EG RF-SOM, that are mandatory for a minimum functional RF-SOM and carrier system.

The carrier needs to include reset buttons, LEDs for status signals, slide switches for selecting the configuration mode and JTAG connector as shown here:

If the mechanical setup requires, place an SD card on the carrier and pull SDIO_SEL to ground.

Connect UART1 interface in the carrier (MIO pins 16 and 17). The IO voltage level on these pins is 1.8V, so if a USB to UART interface like the FTDI FT232R is used, a voltage level translator from 3.3V to 1.8V must be used.

For a minimal setup it is recommended to use the RGMII Ethernet, since it requires only the RJ45 connector with magnetics on the carrier.

In order to be able to access the Blackbox memory the ADM1266 I2C interface needs to be accessible. Place a 1x4pin, 2.54mm pitch, male header to mate with the EVAL-ADP-I2C-USB dongle. Consult the Power Monitoring section for the connector pinout. The 4-th pin is VBUS and can be discarded. 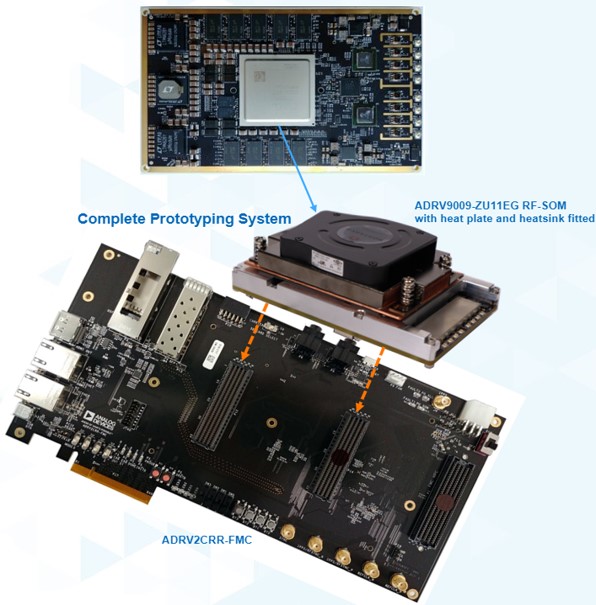 The synchronization of multiple ADRV9009 is accomplished by phase aligning the SYSREF and REFCLK fed into the transceiver and the deterministic latency of the JESD204B data path interface. The phase aligning mechanism is built around the HMC7044, a high-performance jitter attenuator, capable of generating 14 ultralow phase noise output frequencies. Phase alignment is achieved by the pulsed SYNC or RFSYNC inputs, giving the possibility to extend the clock tree to multiple stages.

The complete prototyping system built out of ADRV9009-ZU11EG, ADRV2CRR-FMC, AD-FMCOMMS8-EBZ acts as a proof of concept for synchronizing multiple ADRV9009 transceivers. The diagram below shows the clock tree for a synchronized system consisting of eight ADRV9009 (2 carriers). With a single HMC7044 synchronization board there is the possibility of extending the number of carriers to three, totaling twelve ADRV9009 transceivers. For extending this number multiple HMC7044 synchronization boards need to be cascaded. 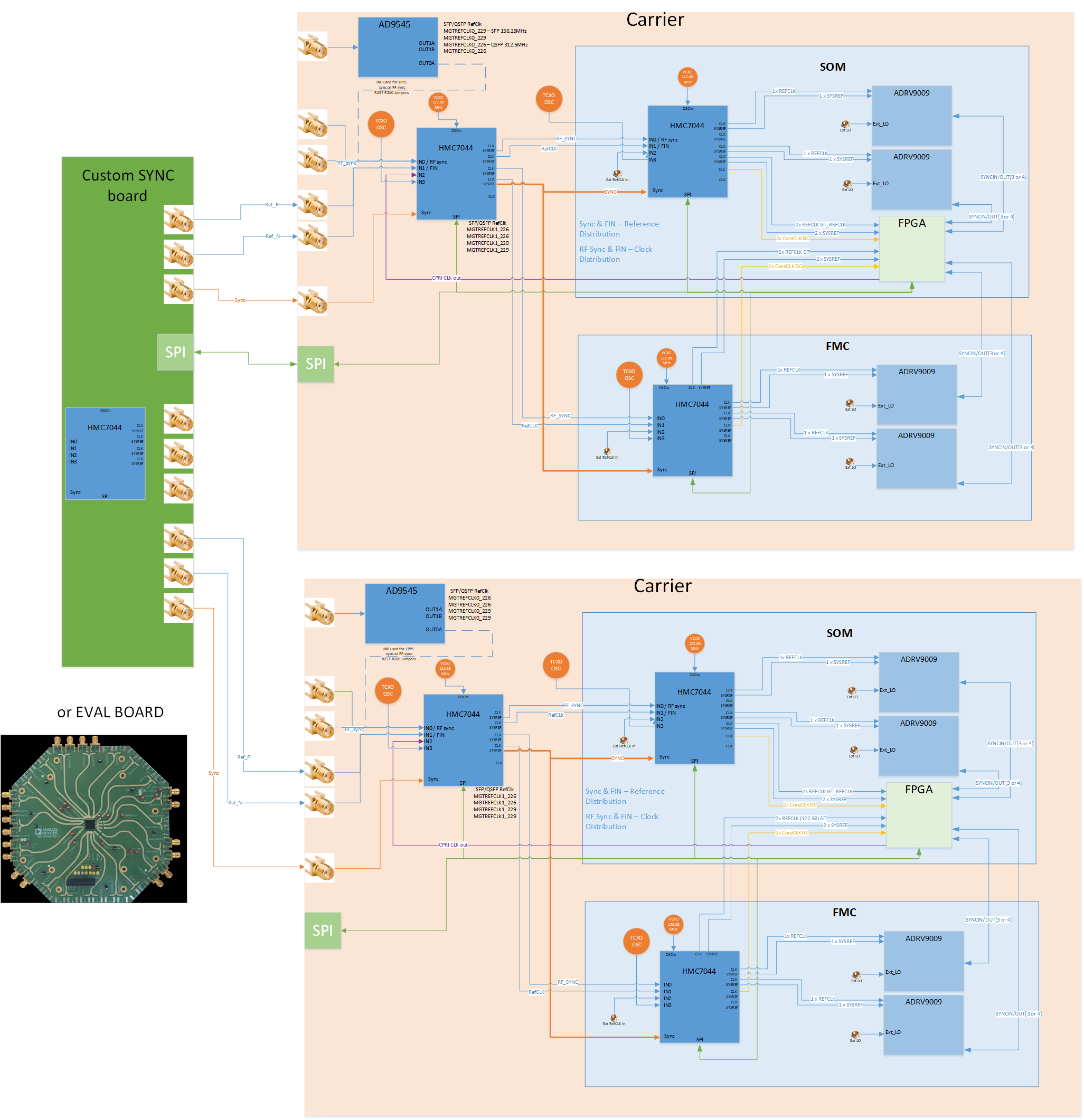 The clock generated by the first stage HMC7044 is distributed throughout the clock tree. The HMC7044 in the lower stages are acting only as fanout buffers. The synchronization is accomplished by pulses on the RFSYNC input. This architecture is easier to manage and is lower power, since only the first stage PLL and VCO are active. Since the high frequency clock signal needs to be distributed it might create routing problems.

In reference distribution the PLLs inside the HMC7044 stages are active and work as clock generators and jitter cleaners, being synchronized by the SYNC input. This architecture provides ultralow jitter and removes the risk of coupling of unwanted signals in the clock chain.

The clocking map below shows the path for both clock and reference distribution. An example is shown for VCXO of 122.88MHz and internal VCO frequency of 2919.12MHz.

The ADRV9009-ZU11EG RF-SOM requires active cooling. It includes overtemperature protection, which interrupts power to the RF-SOM when board temperature reaches 90degC. Without a fan the RF-SOM will turn off in a few minutes under normal operating conditions (25degC ambient, Linux machine running).

The ADRV9009-ZU11EG RF-SOM comes equipped with a custom designed heat spreader plate, that acts as a mounting base for an active cooler. Panasonic EYG-T7070A10A thermal pad is used between RF-SOM and plate.

The heat spreader is designed to accommodate an active cooler with an AMD type SP3/TR4/sTRX4 socket. There are two sets of threaded holes. When thermal sheet is added between heat plate and fan the set of holes with the smaller thread depth should be used for mounting the fan.

The ADRV2CRR-FMC kit includes a heatsink with fan for the ADRV9009-ZU11EG RF-SOM, and Würth Elektronik 39410 EMI gasket sheet, that acts both as thermal transfer material between plate and heatsink, and RF Shield/Absorber.

EMC testing has been carried out on the SOM. This may be useful as a reference for validation or qualification of custom designs. The report can be found here:

The X-Y Footprint is located here: