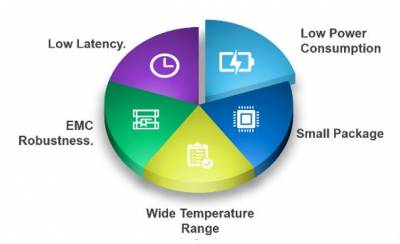 In automation applications there are a few critical features required to ensure high reliability and network resilience. 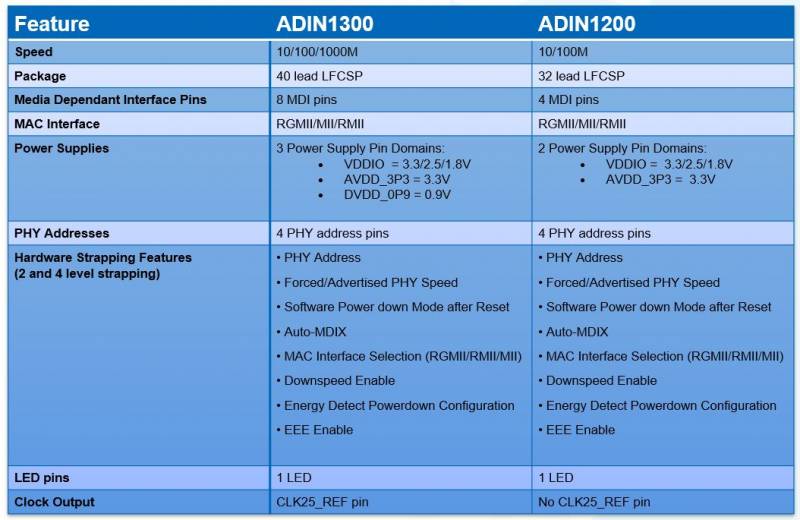 The PHYs hardware configuration pins allow user predefine the personality of the PHY for unmanaged applications. The features that can be configured by bootstrapping are as follows:

The Latency in MII mode is a fixed number, dependent on clock cycles. There is no FIFO in MII and therefore no variation on this figure. For 1000M mode, there is a FIFO and there will be an 8ns uncertainty, this is captured in the datasheet latency specs.

The Receive latency numbers quoted in Table 1 from the Datasheet are measured from start of data at MDI to the positive edge from RGMII.RXCLK. These are following the MDI to MII/GMII delay constraint definitions in Table 24-2/3 in IEEE Std 802.3 for 100BASE-TX and Table 40-14 for 1000BASE-T, extended to 10BASE-T and RMII/RGMII using the same reference points, i.e.

Does the PHYs support JTAG?

There are no power up or down sequencing requirements.

Software tools for evaluation of the PHYs?

When using the ADI evaluation board with the ADuCM3029 MDIO interface dongle, there is an accompanying Software GUI which provides the user with easy access to all registers in the PHY and allows user do an initial evaluation of the part prior to developing own hardware and software. There is also a Linux driver for the ADIN1200 and ADIN1300, available in Linux mainline.

The package has a standard exposed paddle, which should be soldered to the board for thermal reasons, ideally the solder pattern will have a full via array for best thermal performance. The extra exposed strips seen above and below the exposed padded are exposed bus bars, they are connected to internal voltages, so should not be grounded, there should be no vias directly underneath these areas, they should be treated as keepout areas. They do not need to be soldered down.

WoL is primarily a MAC function. In a PC / LOM application a MAC-PHY is commonly used and WoL is implemented in the MAC-PHY and a processor / PC system can be put in a sleep mode and is woken by the receipt of a WoL packet.

Some PHYs include the detection of the magic packet so that the MAC can also be put in a sleep mode. The ADIN1300 does not include the magic packet detection function. In fact, WoL is not a low power mode from the PHY point of view as it still has to be up and is consuming power all the time, even in idle with no data transmission. An alternative approach and one that enables more efficient power consumption would be to use the PHY Energy Efficient Ethernet mode (EEE). If EEE is used, the link can be left in Gigabit EEE mode, the PHY power consumption is ~50 mW. So a significant saving vs Gb idle (330mW). Now when a packet is received, the PHY wakes up in 20 us (micro seconds) and wakes up the MAC. The MAC can process the packets to decide if a WoL packet and can wake up the system or ignore. A switch will usually only send packets destined for the device on that link. There will be occasional broadcast packets, so you will have some spurious wakes of the MAC, but overall the power should be lower using EEE than WoL.

No, the ADIN1300 or ADIN1200 do not support SGMII interface. They supports MII, RMII & RGMII MAC interface modes.

C driver code for the PHYs?

No, currently we have a Linux driver which is available upstream in the kernel. Further detail around the driver is available on our Wiki page

Back to back or repeater mode of operation?

Yes, when using the RGMII interface the PHY RX/TX are fully compatible, so they can be connected back to back. The only caution is to ensure to implement the internal delay on one side (typically the RX side for each side of link), this can be done either with hardware strapping or with a register write over the MDIO interface.

Note that the RMII PHY TX/RX interfaces are not functionally compatible, so cannot be connected back to back by default, instead a register write is required to support this mode of operation. Refer to the detail in the datasheet for specific details of the register involved.

IEEE1588 enables high accuracy synchronization of clocks over Ethernet. To eliminate variability in the delay of timing packets between devices, PTP compliant Ethernet hardware records the time that PTP packets enter and exit the device and makes these time stamps available to PTP software, enabling the PTP application to use timing packets to accurately synchronize two clocks.

The ADIN1200 and ADIN1300 help to support IEEE1588 timestamping by providing start of packet indication to the MAC using hardware pins (programmable which pins). The PHYs do not timestamp the data directly. The MAC would timestamp based on the hardware pin indication from the PHY. Refer to the Start of Packet section in the PHY datasheets.

Yes, the ADIN1200 & ADIN1300 support Synchronous Ethernet. Synchronous Ethernet is the ability to output a clock synchronous to the recovered receive clock. A Master clock would exist at a local PHY in Gigabit Master mode. The remote PHY in Slave mode recovers the clock and outputs it on the GP_CLK pin. This clock source is then used to generate a local clock for any PHYs or switches beside this remote PHY. While SyncE is used in some applications, it has primarily been superseded by 1588.

The ADIN1300 can support cable lengths up to 150 meters at Gigabit speeds and 180 meters when operating at 100 Mbps or 10 Mbps. The ADIN1200 supports cable lengths as long as 180m. Limited additional experimental data with the ADIN1200 suggests it can operate out to 210 meters (at 100 Mbps) over CAT5 cable with the default configuration settings.

The ADIN1200 & ADIN1300 provide hardware pins for Start of Packet indication based on the SFD in the ethernet frame. This function is programmable in terms of which pins are used to provide the indication for Tx and Rx side. See datasheet for full detail on register programmability. One element of programmability is the delay

The SopTxDel delay register is provided to align the TX_SOP signal on the chip pins to the TX SOP on the MDI pins. Jitter should be within ± 4ns by design for all speeds. Using TX_SOP makes more sense for the TX path since it would remove any variable PHY delays, which would happen depending on the speed/MAC interface mode, e.g., in the ADIN1300/1200:

The recommended SopTxDel values (called out in the datasheet register documentation) would align the TX_SOP signal to the SOP signal on the MDI pins.

RX_SOP is less useful in general, since there is only a variable PHY delay in the RX path in ADIN1300/1200 when the RMII interface is used (100BASE-TX or 10BASE-T). In all other cases, there is no variable delay in the RX path, and therefore the SOP signal can be extracted at the MAC side. The timing between RX_SOP and the MAC side RX SOP (RX_DV=1, RXD = 0xD5) sampled on the rising edge of RX_CLK) would be fixed (See figure below). But since the RX MAC interface signals are synchronous to RX_CLK, while RX_SOP is not, the later would have to be re-synchronized to the MAC clock, so it might have in fact less precision (depending on the MAC implementation). The t1 value would be independent of the MAC interface (MII/GMII/RGMII/RMII). The values (from simulation) are:

- In 100BASE-TX: t1 = 260 ns - In 1000BASE-T: t1 = 212 ns The RX_SOP signal at the chip pin will have some additional delay, due to the internal routing and the I/O cell delay, which will be heavily dependent on the loading and PVT, estimate for that delay to be somewhere between 2 ns and 6 ns. The SopRxDel delay does not make so much sense in general for ADIN1200/1300. Given that the RX SOP on the MDI pins will happen before the RX_SOP signal on the chip pin, to align both signals (as done in the TX side), it would be required to advance the RX_SOP signal rather than delay it, but that is obviously not possible. Therefore, the SopRxDel delay was intended for a different purpose, it is provided for cases where there may be a very long latency in the MAC interface (for example if the PHY had an SGMII interface) to ensure that the RX_SOP signal is received at the MAC side during the corresponding frame, as if that was not the case it might cause problems.

The ADIN1200 & ADIN1300 are voltage mode with on chip terminations. Therefore, there is no need for external termination resistors from the center tap of the transformer to the supply as required in current mode line drivers. In addition to reducing components, Voltage mode driver also manifests a significant reduction in power consumption versus current mode.

When comparing PHY devices, ensure to check whether the output stage is voltage mode or current mode and also review whether the power consumption figures for current mode include the current dissipated in the transformer as a result of termination resistors.

Do the Exposed Pad and Bus Bars have to be soldered down?

The LFCSP has an exposed pad underneath the package that must be soldered to the PCB ground for electrical, mechanical and thermal reasons. For thermal impedance performance and to maximize heat removal, use of a 4 × 4 array of thermal vias beneath the exposed ground pad is recommended.

There are also two bus bars on either side of the exposed pad, these bus bars are connected to internal voltage rails and are not intended or required to be soldered to the board. The PCB land pattern must incorporate the exposed ground paddle with vias and two keep out areas around the bus bars in the footprint. No PCB traces or vias can be used in either of the keep out areas. The EVAL-ADIN1300FMCZ uses an array of 4 × 4 vias on a 0.75 mm grid arrangement, as shown in the figure below. The via pad diameter dimension is 0.02 in. (0.5015 mm) and the finished drill hole diameter is 0.01 in. (0.2489 mm). This also applies to the exposed pad and bus bars for the ADIN1200. See the ADIN1200 Datasheet for the equivalent figure relating to the different package size. 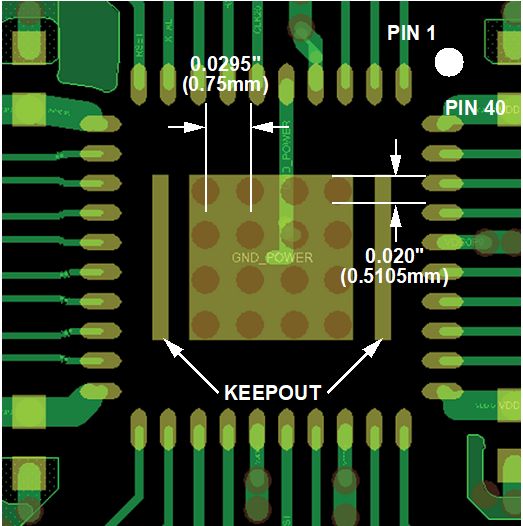