By default the FMComms5 is configured with the Minicircuits TCM1-63AX+ baluns on the Rx1A, Rx2A, Rx1C, Tx1A, Tx2A, and Tx1B channels. This wideband balun allows for tuning across the entire 6GHz range of the AD9361, although performance may be compromised at some frequencies.

By default the FMComms5 uses a Rakon 40MHz RXO3225M as the reference clock. This is driven into the ADCLK846, which distributes the clock to the two AD9361s, the ADF5355, as well as back to the FMC connector. It is important that the PCB trace lengths to the two AD9361s be equally matched.

If you change the frequency of the reference clock, you must update the device tree.

While the AD9361 contains two identical synthesizers to generate the required LO signals for the RF signal paths: one for the receiver and one for the transmitter, and these PLLs require no external components; for phase sync'ed applications, it is sometimes easier/better to use an external LO for an improvement in phase noise, and overall easier phase synchronization.

The FMComms5 comes with the layout provisions to accept the ADF5355. In the interim, an external LO signal can be injected into J302. This LO will be distributed to the two AD9361s by the Inphi 13617. Similar to the reference clock distribution, length matching is very critical for the external LO routes.

The FMComms5 comes with the ADF5355. This onboard reference normally flows through C331, and C332 (and C390 and R350 are DNI). To use the onboard ADF5355, just pick the right device tree on the SD Card. With the necessary device tree, the ADF5355 can be controlled like any IIO device to change the LO frequency of both transceivers.

The hardware modifications (moving the cap, removing the cap, adding the resistor, is difficult since the components are tiny (0402 packages or 1 x 0.5 mm) and should be done by skilled professionals only 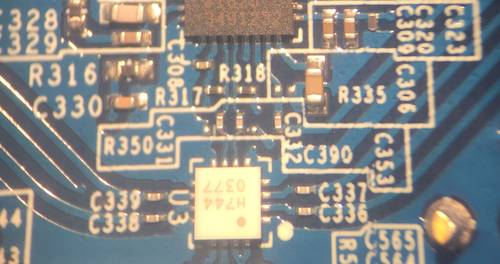