The purpose of this project set is to demonstrate an example narrowband modem design from simulation to complete standalone deployment utilizing the ADI software/hardware infrastructure and the MathWorks toolset. The project includes MATLAB floating point simulations, Simulink floating point models, and HDL capable fixed point models of a QPSK modem design. They also include integrations with SDR devices including PlutoSDR, FMComms2/3/4, and RFSOM for real-world testing. All designs have been developed to communicate, over the air if desired, with one another and share a common testing harness for validation. Together, these designs demonstrate a true development cycle from simulation to hardware deployment. For deployment, which is completely untethered from MATLAB or Simulink, a specialized/custom reference design was created through ADI's BSP and demonstrates a video link with the PackRF kit.

A detailed workflow that governs this model development is outlined in the figure above, capturing the necessary steps from ideas to production ready hardware. This flow has been explored previously in an article series about ADS-B.

The modem project is available under the TransceiverToolbox repository. The code is structured in the following way:

The main IP is provided in two libraries RxTxFixedPointLibrary.slx, RxFloatingPointLibrary.slx. These contain receiver and transmitter blocks which are used in the demo models and testing harness. By using libraries, blocks can be easily shared and maintained between models. The Fixed-Point specific libraries models are shown below. These blocks maintain an array of configuration for the internal designs as well as the necessary interfaces to the AD9361 transceiver and DMA IP back to the ARM on the SDR itself. 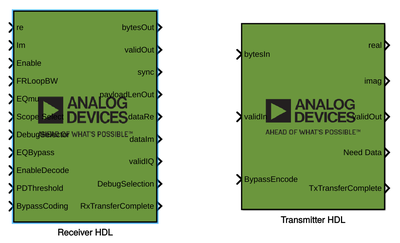 The modem was designed as a constantly transmitting frequency division duplexing (FDD) system with a single transmit channel (uplink) and single receive channel (downlink), enabling a single point-to-point link between two nodes. The link itself is a QPSK waveform which continuously transmits data so the target receive can remain synchronized. When useful data is transmitted it is simply modulated with some markers and training data known to the receiver. When no useful data is to be transmitted, the transmitter will connect a LFSR to the modulator and random data will be sent to the receiver. 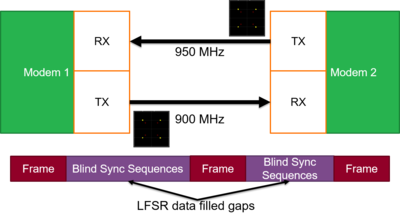 The system is designed in this way since it produces a relative steady state for the AD9361's AGC when the devices are nodes are stationary, and fits nicely with the controlling IP logic of the AD9361 as well for the transmitter specifically.

The waveform or packet structure is outlined below. The packet contains a known barker sequence used by correlators to detect a useful payload in the data stream. Once found a DFE will utilize the following training data for channel correction or any remaining synchronization. After the training data a 16 bit header is inserted which is duplicated with all bits flipped for validation. Currently only the payload length is contained in this header and is limited to 1600 bytes. Finally, the payload data is inserted which can be variable length but must be a multiple of 8 bytes, which is the DMA word length used in the final design. During the LFSR state random training data is transmitted.

The receiver algorithmically is split into two main areas. The front-end, or blind section, of the receiver is responsible for timing synchronization and carrier recovery. These tasks are completed with PLL based algorithms that continually estimate and correct for drift in the received signal. Connecting the front-end to the downstream processing is a packet detector, which uses a set of filters to correlate the known preamble signal with the incoming data. Once a packet is detected, the second half of the receiver (the downstream processing) is enabled starting with the DFE. The packet detector also provides phase ambiguity correction of the QPSK signal through a filter bank.

The DFE initially has a training phase using known PN generated data, then switches to a decision directed mode once the header appears. The header is processed so the downstream decoding can be configured including the DMA. The demodulated bits are then channel decoded, descrambled, and finally CRC checked before being passed to the DMA. Once the packet has been fully processed the packet detector will reset and the process for finding another packet will begin again.

The developed modem was specifically designed and tuned for the AD9361 using the axi_ad9361 IP cores. The deployed and streaming models should function with:

The developed designs implemented to show off different features for debugging and development in the MATLAB and Simulink environments with ADI transceivers. Therefore, different examples with require specific toolboxes and hardware depending on use case.

The main dependencies across all example are MATLAB version 2017b or later, and your license needs to include the following components:

When targeting the FPGA or streaming data, there are two options depending on the hardware you have. Official MathWorks support is provided through the Communications Toolbox Support Package for Xilinx Zynq-Based Radio. This Hardware Support Package (HSP) supports the following hardware:

Alternatively, ADI provides support for through the Analog Devices Board Support Package (BSP) for the following boards:

The ADI BSP currently does not support External Mode unlike the MathWorks HSP. ADI recommends utilizing the MathWorks officially supported HSP if your board is shared between both lists.

Besides, the following items are required in prototype and production stages:

MATLAB Unittest Tagging of tests Hardware in the loop

The codebase is designed to reuse code as much as possible. Therefore, the recommended process for getting started with the modem project is to perform the following:

Launch MATLAB and navigate to the TransceiverToolbox\target_models\modem-qpsk folder. Now add the necessary files to your path by running the startup script:

If you are generating HDL code you will be to add Vivado to your MATLAB path. There is a helper function to make this easy as long as Vivado is installed in a default location:

Next, you can proceed to the build and run the desired demo.

This demo is a simple “Hello World” example that demonstrates a simple loopback test where transmitted packets contain the message “Hello World N” where N is a number 0-9. These messages are recovered and passed from the FPGA directly back into MATLAB for display. This example uses a minimum set of toolboxes and requires no modification to the HDL reference design. The model is called Standard IQ since the default interfaces into the IP are 16bit for real and imaginary, which are reused to send payload information (characters) back to the host PC. Specifically, the real component contains the payload characters and the imaginary component contains synchronization information to mark where the payload starts and stops for correct display.

First, make sure you have gone through the setup process for your given board documented SDR set up. The deployed model is applicable for FMComms 2/3/4 and ADI RF SOM SDR devices.

To run this example first navigate to the FixedPoint\demos\Standard_IQ folder.

Run the script hdlworkflow.m which will build the design for the FPGA:

Once the build has completed move the generated bit file to the board as:

Now the board is ready to go and we can start interfacing with the FPGA through Simulink and MATLAB. First, open the transmitter interface model:

This model is responsible for configurating and driving the transmitter. Once open run the model, then move back to the MATLAB command prompt once running. 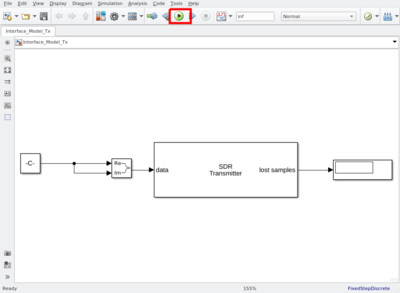 Back at the command prompt run the receiver function which will start printing received messages:

These messages will appear at a high rate since in this configuration the radio is running at 384kHz. Now you can modify the design if desired in the model provided in the folder combinedTxRx_StandardIQ.slx. However, By only relying on the default reference designs, HDL Coder, and the baseline HSP features information from the FPGA will be limited to the IQ default interfaces from the generated IP.

This demo provides builds up the Standard_IQ model but also exposes various configuration and status information from the deployed design. This example utilizes Embedded Coder in Simulink to provided interfaces into different registers of the design and pushes visualization back into Simulink. The 16bit IQ channels are used to visualized the received constellation at different points in the received chain. This is configurable since these different routes are mapped into a mux whose index is controllable through a register. Two outputs are provides besides the streaming IQ information, which includes a register that contains the last recovered payload length and a selectable debug signal. This selectable debug signal also has a connected mux which allows selection of:

First, make sure you have gone through the setup process for your given board documented SDR set up. The deployed model is applicable for FMComms 2/3/4 and ADI RF SOM SDR devices.

To run this example first navigate to the FixedPoint\demos\External_Mode folder.

Run the script hdlworkflow.m which will build the design for the FPGA:

Once the build has completed move the generated bit file to the board as:

Now the board is ready to go and we can start interfacing with the FPGA through Simulink. First, open the combined interface model:

This model is responsible for configurating and driving the transmitter, receiver, and AXI register reads and writes. Once open run the model. 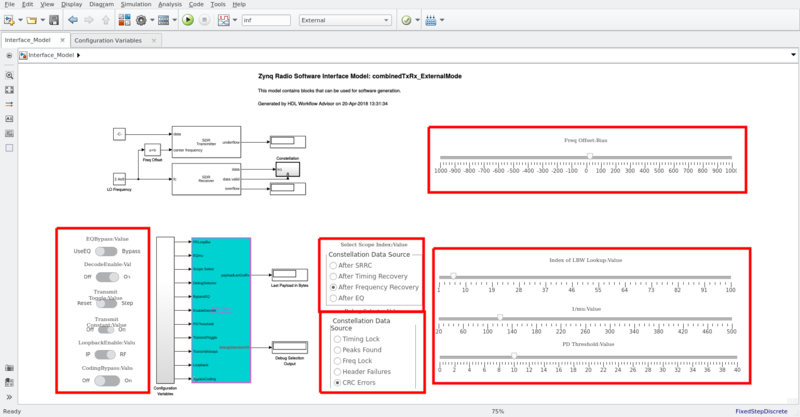 While the model is running the scroll bars and knobs are configurable, which will change the state or configuration of the deployed modem. At runtime, only a single Constellation Diagram scope should appear, which will show data from the point selected in “Select Scope Index:Value” radio buttons provided in the model.

By using the model in External Mode it allows greater configurability of the running design on hardware. However, External Mode is limited to Simulink, requires Embedded Coder, and has limited performance.

Under the hood Simulink and External are exposing some of the model's configuration parameters and status values as AXI-Lite registers provides the means to configure and monitor the IP at runtime from software. This way the IP does not have to be regenerated every time a tuning value needs to change and debugging becomes much more flexible. The External Mode demo is actually using these interfaces under the hood but it may not be obvious to the users. In the demos ADI_DMA_TT and AXI_MM these control interface are much more obvious, and arguably more flexible.

In many cases, in order to figure out what is not working right in a design, it is necessary to be able to look at the internal signals at the design's internal clock rate. The most common debugging methodology for deployed signals is to use the Xilinx Integrated Logic Analyzer (ILA) IP core and the Xilinx Chipscope Analyzer software. ILA blocks can be dropped into design before synthesis. The signals to be monitored can be exposed in the design as “External Port”.

Another option is to use the Simulink “FPGA Capture” block. This block connects to the signals in the design that need to be monitored. After generating the HDL for the model a new model called “FPGADataCapture_model.slx” is automatically created allowing to connect to the deployed design and display the signals in Logic Analyzer, Simulink, or MATLAB.

The modem IP implements the Data Link layer of the OSI stack but, in a deployed system, the full stack needs to be implemented. To verify the modem design in a real-life system it was exposed as an Ethernet connection in Linux by making use of the TUN/TAP virtual network layer device. 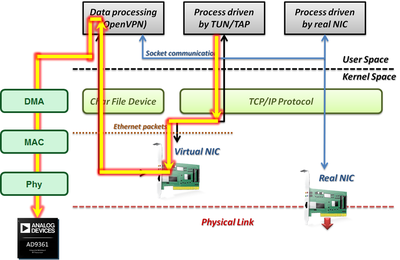 The ADI_DMA_TT design allows for video streaming example which has further detail in these articles:modem setup and PackRF software. This design requires a specific kernel and devicetree, since it was designed for a specific platform (PackRF). Prebuilt files have been provided here (Note that you may have to click on the *View raw* link to directly download the file from the forwarded page on GitHub):