The Vivado HDL design is provided with an integrated FOC and speed & torque controller generated from a Simulink model provided by MathWorks. The controller is designed in Simulink and the corresponding HDL code is generated using the Mathworks HDL Coder.

The FOC controller model is provided by MathWorks and it is integrated in the HDL design as a standalone IP core. Below is presented a top level diagram of the controller's Simulink model. For more information about the model check out the MathWorks website.

The controller model is packaged into an IP core using the Simulink Workflow Advisor. It exposes a set of AXI-Lite registers that can be used to control the IP's operation as well as a set of interface signals for encoder input, current measurement data, inverter control and internal operations monitoring. All the monitoring signals connect to an ADI IP which allows these signals to be monitored from the Linux IIO Scope application. The AXI-Lite registers exposed by the controller IP core can be directly accessed through an uio driver present in the ADI Linux distribution for Zynq. The table below lists the exposed AXI-Lite registers.

The operation of the IP core is controlled through the foc_script.sh script located under /usr/local/bin. The script executes the following steps:

The IP core exposes a set of signals for interfacing with the rest of the system. The table below lists the exposed interface signals.

Below is presented a picture containing the output of the script, the IIO Scope settings and a controller monitored signals plot. 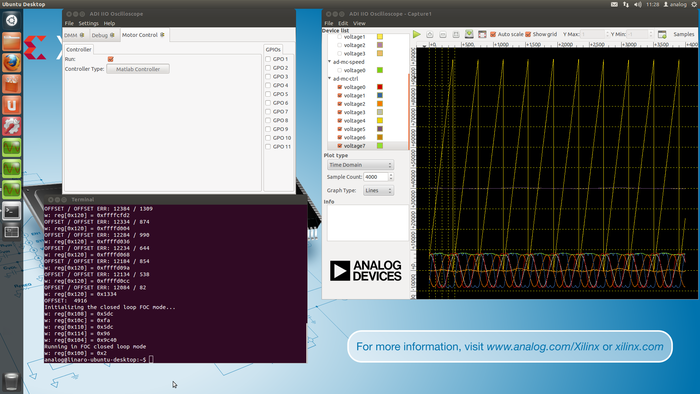