The AD-3DSMARTCAM1-PRZ is a 2D & 3D machine vision solution with AI edge processing capabilities. It can be used for implementing advance machine vision applications for different industry segments including logistics, robotics, agriculture and people activity monitoring. 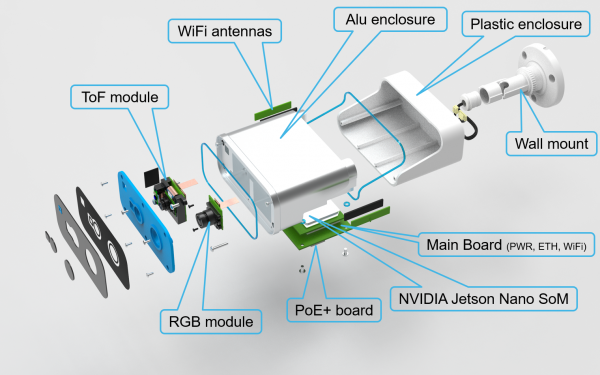 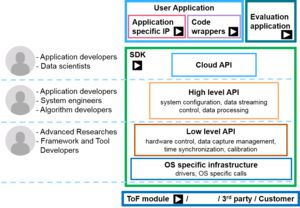 An open-source SDK that accompanies the hardware platform enables you to configure the system and extract depth and RGB data from the camera on the system of your choice. Windows and Linux support are built into the SDK as well as sample code and wrappers for various languages including Python, C/C++ and MATLAB. The SDK also integrates with 3rd party technologies like OpenCV and RoS.

A set of applications have been developed for the 3D Smart Camera to showcase the system's capabilities but also to be used as a starting point for custom development.

Detecting and measuring the size of boxes is the base of many use cases for logistics, industrial and commercial applications. By combining the information received for the 3D and 2D sensors, the 3D Smart Camera can reliably measure boxes of various sizes with an accuracy between 0.5cm and 2cm per each dimension, depending on the operating conditions and box characteristics.

Knowing the precise position of people in a space has many use cases for robotics, building management, healthcare and AV applications. The 3D Smart Camera enables precise detection and tracking of people in the 3D space as well as detecting the objects people are touching, carrying or sitting on and the boundaries of the space such as the floor, walls and ceiling.

Autonomous robots need to be able to “see” the objects and people which are around them to be able to move inside a space and accomplish their tasks without bumping into things or injuring people. By combining the people and objects detection with real time objects dimensioning and positioning is space, the 3D Smart Camera can enable an autonomous robot to navigate safely in an environment.

This application shows how the 3D and IR data can be used to create a 3D map of a space using the ROS RTAB-Map (Real-Time Appearance-Based Mapping), a RGB-D SLAM approach based on a global loop closure detector with real-time constraints. Applications include robot autonomous navigation and 3D space reconstruction.

Getting your system up and running 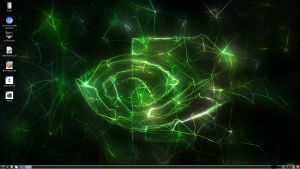 For questions and more information please contact us on the Analog Devices Engineer Zone.