The PMOD interface can be found on many microprocessor development platforms, FPGA development kits, and are a great way to begin prototyping a design. To make it easy for our customers to test and evaluate ADI PMOD boards, the SDP-I-PMD was developed to enable quick and easy connection to the ADI system demonstration platform (SDP). This allows for testing the functionality as well as the performance of the circuit using a controlled evaluation environment. Demonstration software is available for many PMOD hardware modules but not all, so please check each project carefully for details.

The SDP-I-PMD can be used to connect all ADI PMOD boards directly to the SDP, creating a PC interface via the USB port, and allowing for LabVIEW software development. 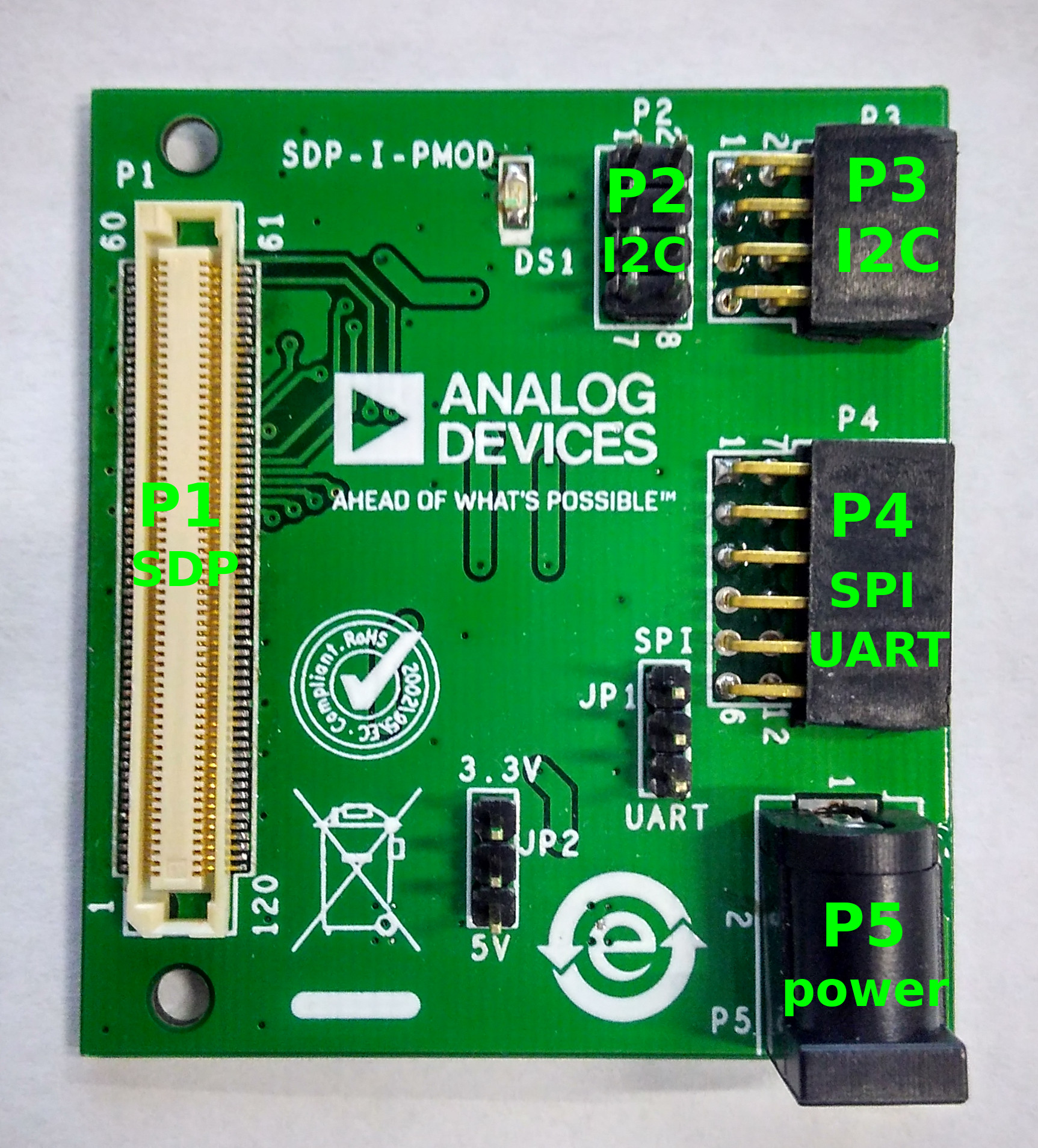 Pictured above is the SDP-I-PMD interposer board which was developed to quickly and easily connect ADI PMOD boards to our system demonstration platform (SDP). The connectors on the SDP-PMD-IB1Z board is marked by the green font on the picture.

The SDP-PMD-IB1Z itself won't do anything without the SDP hardware control board and a 6V external power supply through P5 connector.

When using the PMOD-SDP interposer board to connect PMOD boards to the PC via the SDP platform, you should be connected to the EVAL-SDP-CB1Z via the CONA connector to the P1 connector on the SDP-PMD-IB1Z board.

For a complete understanding of supporting communication protocols and their respective pin outs and form factors please see the official Digilent specification. 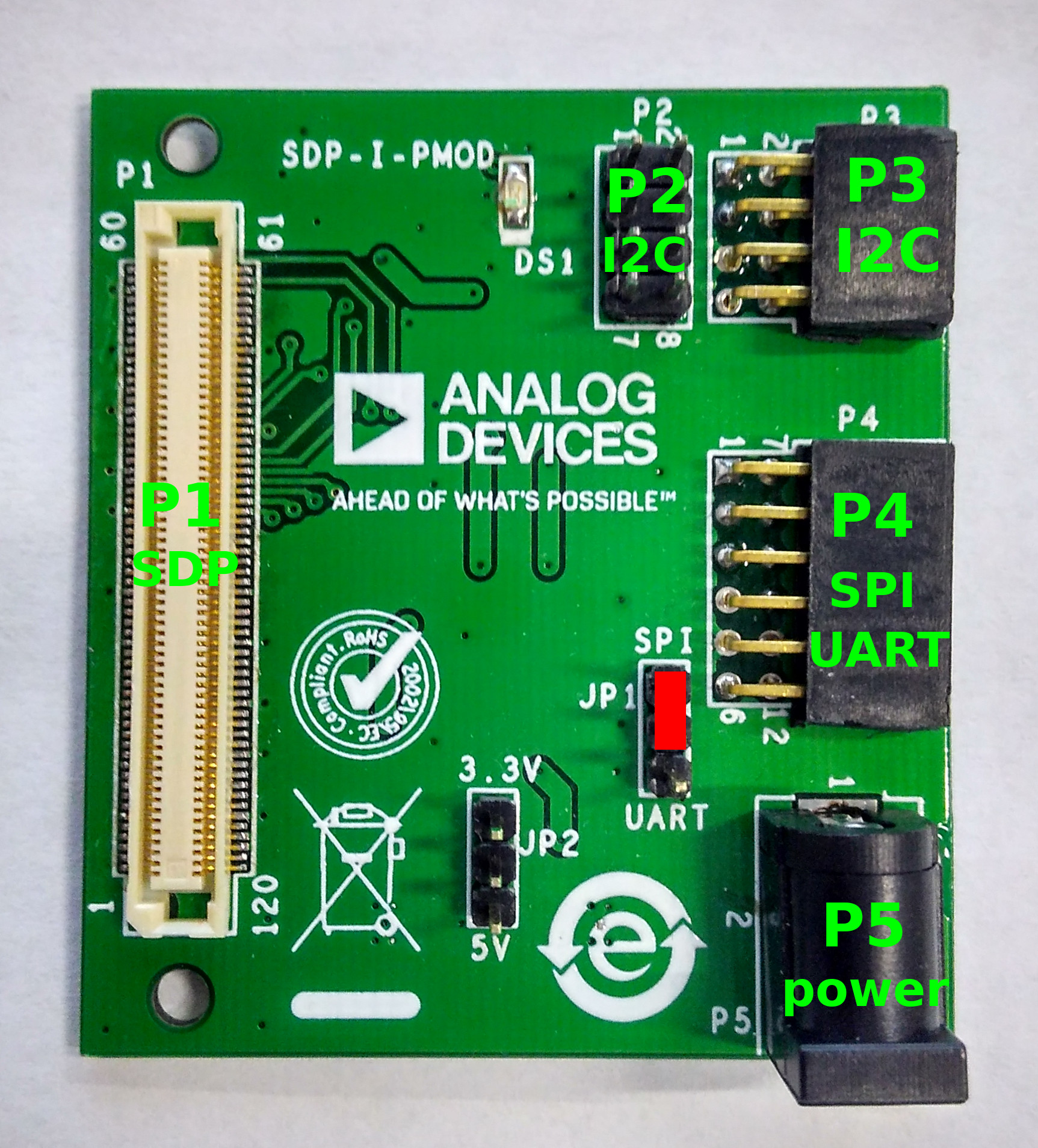 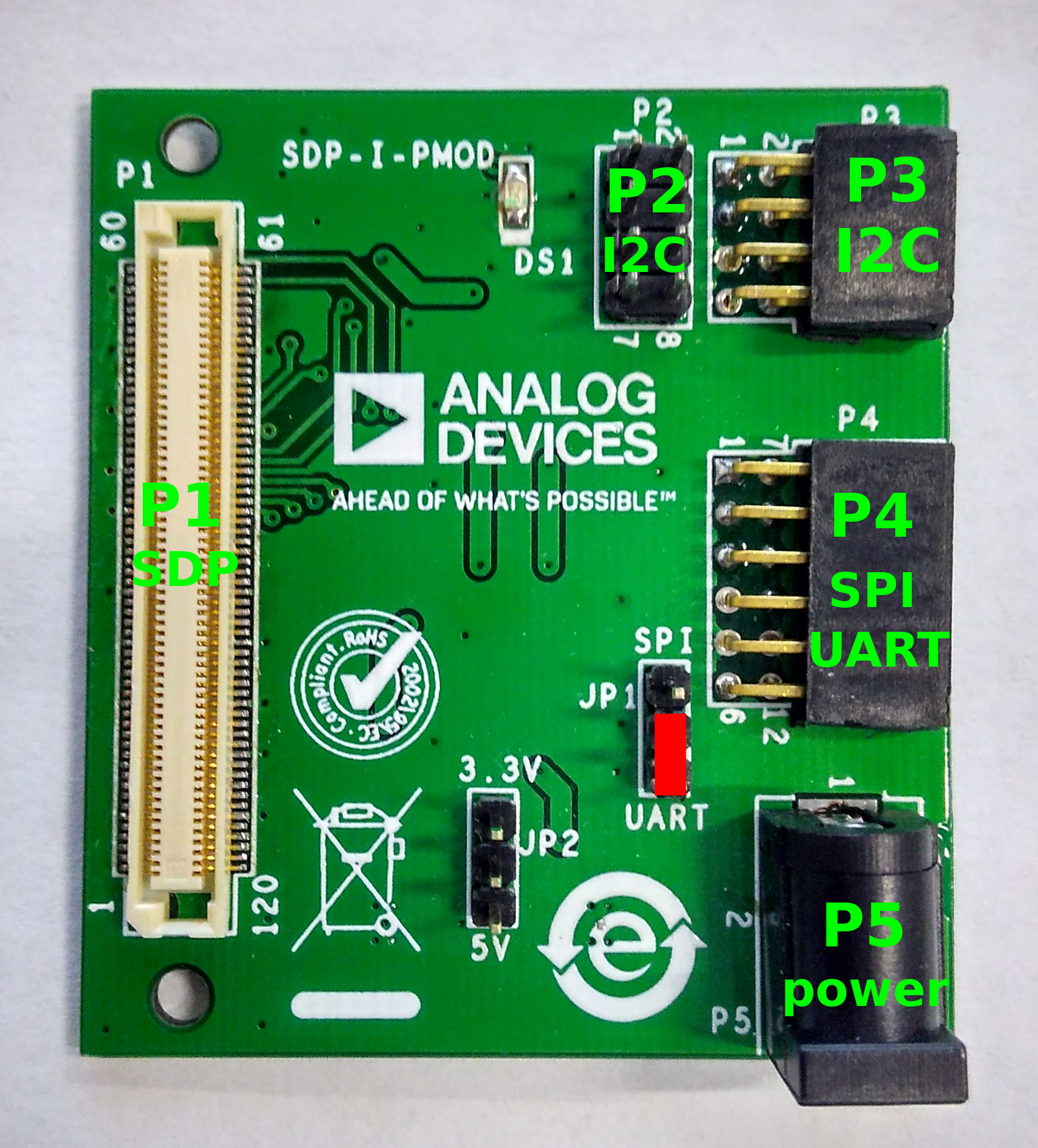 Please make sure the P4 working mode selection jumper JP1 in the right position before power on the system. If the PMOD daughter board used P2 or P3 I2C interface, JP1 could set to any position but don't left it open.

PMOD hardware modules recieve their power from the host controller board. So in this case the SDP-PMD-IB1Z is the host, and we give the option for supplying your PMOD board with either 3.3V or 5V depending on the position of jumper(JP2). The position of the jumper will decide the voltage rail passed, so please be careful to know which voltage rail your PMOD board needs before selecting a setting. 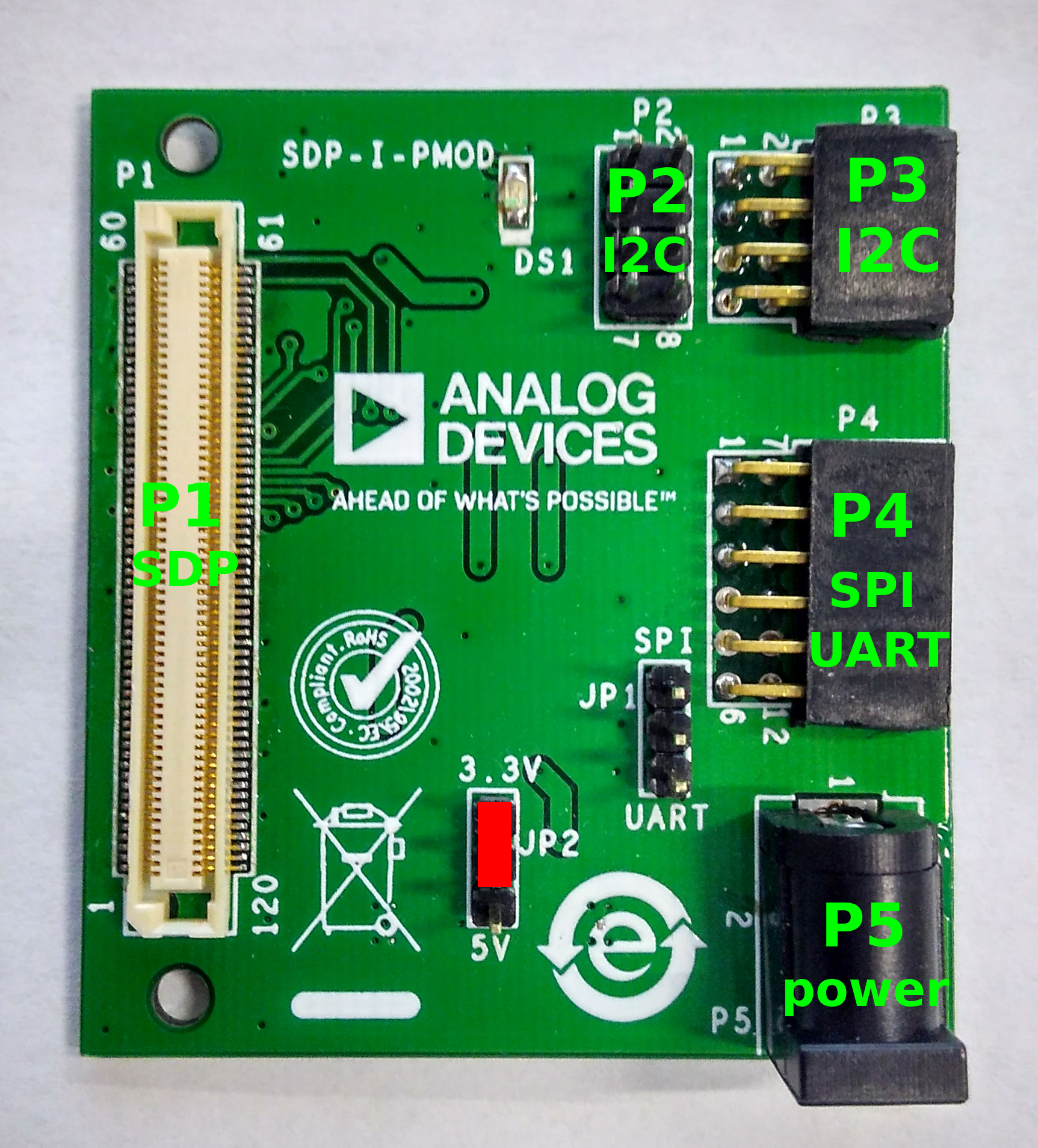 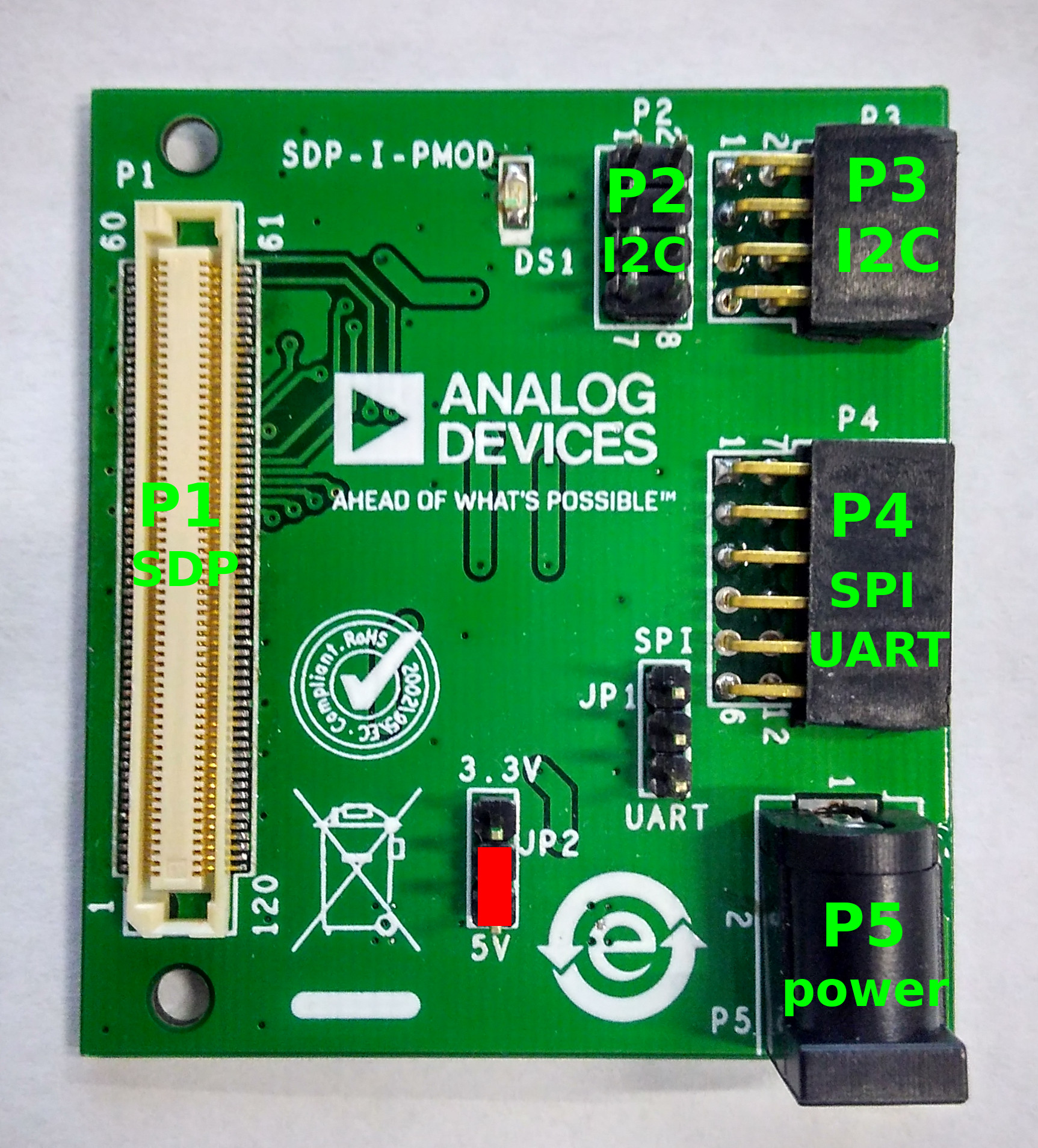 If you are using the SDP with the PMOD-SDP adaptor board, and any PMOD hardware boards, please use the following setup procedure:

When you finished your system evaluation, before disconnect any connector or remove any jumper please disconnect 6V power supply (EVAL-CFTL-6V-PWRZ) from P5 of SDP-PMD-IB1Z first.

Following is a table of current PMOD boards offered by Analog Devices, and will connect to the PMOD-SDP adaptor board.