View the original AN-1119 document posted to Analog.com.

“Noise problem!” Two words every circuit board designer has heard that trigger hours of lab testing time to identify the culprit. Only later to learn that the noise is due to poor layout of the switching power supply. Such problems incur a new layout, schedule slip, and additional development costs. This application note presents printed circuit board (PCB) layout guidelines for avoiding these types of noise problem scenarios. An example switching regulator layout using the ADP1850 dual channel synchronous switching controller begins with identifying the current paths of the regulator. The current paths then determine the placement of the components in this low noise layout design.

In switching converter designs, high current paths and low current paths are all in close proximity. Alternating current (ac) paths carry spikes and noise, high direct current (dc) produces significant voltage drops, and low current paths tend to be sensitive to noise. The key to proper PCB layout is to identify the critical paths and then arrange the components and provide sufficient copper area to avoid high currents from corrupting low currents. Symptoms of poor performance show up as ground bounce and noise injected into the IC and the rest of the system.

Figure 1 shows a synchronous buck regulator design with a switching controller and the external power components: high-side switch, low-side switch, inductor, input capacitor, output capacitor, and bypass capacitor. The arrows in Figure 1 show the flow of the high switching current. It is important to place these power components carefully to avoid unwanted parasitic capacitance and inductance, which cause excess noise, overshoot, ringing, and ground bounce. 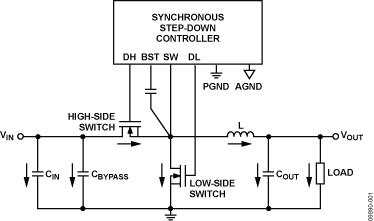 t ac switching pulse currents that can reach more than 3 A for a few nanoseconds. Keeping the high current loops small is critical to avoid additional noise pickup and minimize output ringing.

Low value, low amplitude signal paths, such as the compensation and feedback components, are noise sensitive. Keep them away from the switch nodes and the power components to avoid unwanted noise injection.

t. Therefore, the path to each individual switch should be as short as possible to minimize any noise pickup by the controller and noise transmission from the inductive loop. When using a pair of DPAK or SO-8 package FETs on one side of the PCB, it is best to counter-rotate the two. This allows the switch node to be on one side of the pair and the high-side drain bypassed to the low-side source with a suitable ceramic bypass capacitor. Be sure to place the bypass capacitor as close as possible to the MOSFETs (see Figure 2). This minimizes the inductance around the loop through the FETs and the capacitors.

The placements of the input bypass capacitor and input bulk capacitor are critical for controlling ground bounce. Tie the negative terminal of the output filter capacitor as close as possible to the source of the low-side MOSFET. This helps minimize loop inductance that contributes to ground bouncing. Cb1 and Cb2 in Figure 2 are ceramic bypass capacitors, and the recommended value range for these capacitors is from 1

. Add a larger value filter capacitor in parallel for high current applications, as shown by CIN in Figure 2. 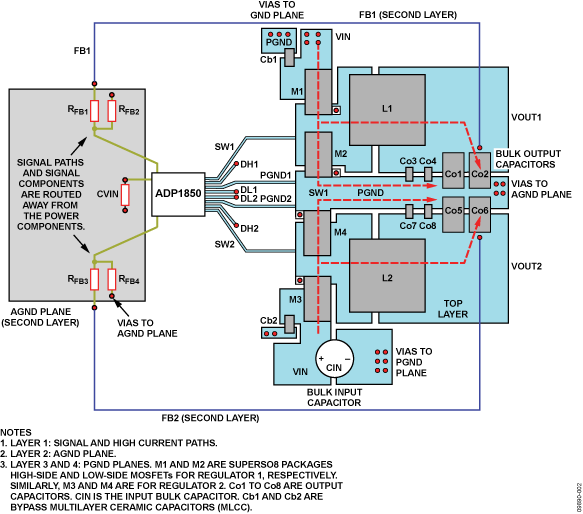 The equivalent series resistance (ESR) of the power MOSFETs, inductors, and bulk capacitors contributes to a significant amount of heat generation under heavy load conditions. To dissipate the heat efficiently, the example shown in Figure 2 places large areas of copper under these power components.

A multilayer PCB is better for heat dissipation than a 2-layer PCB. For improved thermal and electrical conduction, use a 2 ounce copper thickness over the standard 1 ounce copper layers. Several PGND planes connected together with vias also help. Figure 3 shows the PGND plane spread over the top, the third layer, and the fourth layer in a 4-layer PCB design. 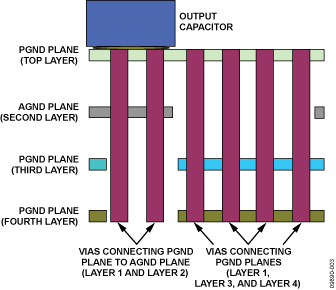 This multiground plane approach insolates noise sensitive signals. As shown in Figure 2, the negative terminals of compensation components, the soft start capacitor, the bias input bypass capacitors, and the output feedback divider resistors all tie to an AGND plane. Do not directly connect any high current or high

t paths to the isolated AGND plane. The AGND is a quiet ground plane with no large currents flowing through it.

The negative terminals of all power components, such as the low-side switch, bypass capacitor, and input and output filter capacitors, connect to the PGND plane. The PGND plane carries high current. 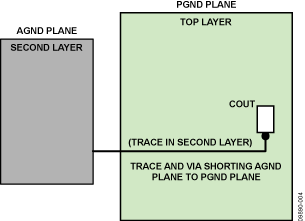 The ADP1850 dual channel step-down controller uses the RDS(ON) of the low-side MOSFET as part of the control loop architecture. This architecture senses the current through the low-side MOSFET between the SWx and PGNDx pins. Ground current noise in one channel can couple into the adjacent channel. Therefore, it is essential to keep the SWx and PGNDx traces as short as possible and place them close to the MOSFETs for accurate current sensing. Be sure the connections to the SWx and PGNDx nodes implement the Kelvin sensing technique, as illustrated in Figure 2 and Figure 5. Note that the respective PGNDx trace connects to the source of the low-side MOSFET. Do not arbitrarily connect the PGND plane to the PGNDx pin.

In contrast, for dual channel voltage mode controllers, such as the ADP1829, the PGND1 and PGND2 pins directly tie to the PGND plane with vias. 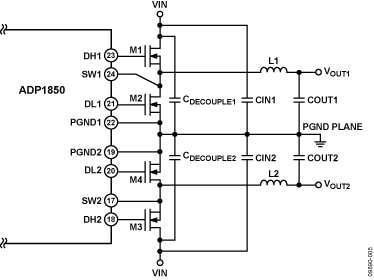 The switch (SW) node is the noisiest place in the switching regulator circuit because it carries large ac and dc voltages and currents. This SW node needs a large area of copper to minimize resistive voltage drops. Place the MOSFETs and inductor close together on a copper plane to minimize series resistance and inductance.

Applications that are more sensitive to electromagnetic interference, switch node noise, and ringing can take advantage of a small snubber. A snubber is a resistor in series with a capacitor (see RSNUB and CSNUB in Figure 6). The snubber that is placed between the SW node and the PGND plane reduces ringing on the SW node and provides a reduced level of EMI. Keep in mind that this addition can slightly reduce the overall efficiency by 0.2% to 0.4%. 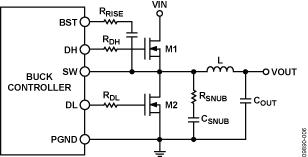 t and tend to produce ringing and overshoot. These traces should be as short as possible. It is best to route them directly, avoid using feedthrough vias. If vias are necessary, use two vias for each one to reduce the peak current density and parasitic inductance.

Slowing the gate drive with a small resistor (approximately 2

) in series with the DH or DL pins also mitigates gate noise and overshoot. Another option is a resistor between the BST and SW pins (see Figure 6). Reserving the space with 0