View the original AN-1112 document posted to Analog.com.

Sensitivity is the ratio of the input pressure to the electrical output (voltage or digital word). For analog microphones, sensitivity is typically measured in mV/Pa. This measurement is converted to a decibel value with the following equation:

is the full-scale digital output level (1.0).

Directionality describes the pattern in which the microphone's sensitivity changes when the sound source changes position in space. All Analog Devices MEMS microphones are omnidirectional (or omni), which means that they are equally sensitive to sound coming from all directions, regardless of the orientation of the microphone. Figure 1 shows a 2-axis polar plot of the micro-phone's response. This plot looks the same regardless of whether the microphone's port is oriented in the x-y, x-z, or y-z plane. 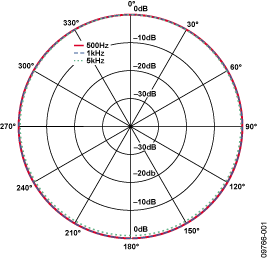 Multiple omnidirectional microphones can be arranged in arrays to create various directivity patterns and for beamforming applications.

SNR is calculated by measuring the noise output of the micro-phone in a quiet, anechoic environment. This specification is typically presented over a 20 kHz bandwidth as an A-weighted value (dBA), which means that it includes a correction factor that corresponds to the human ear's sensitivity to sound at different frequencies. When comparing SNR measurements of different microphones, it is important to make sure that the specifications are presented using the same weighting and bandwidth; a reduced bandwidth measurement makes the SNR specification better than it is with a full 20 kHz bandwidth measurement.

Figure 2 shows the relationship between an acoustic input measured in dB SPL and a microphone's voltage output in dBV. The dynamic range and SNR measurements are shown between these two scales for reference. Figure 2 uses an ADMP404 with a -38 dBV sensitivity and 62 dB SNR to show these relationships.

A similar relationship between dB SPL input and dBFS output for digital microphones is shown in Figure 3. Note that in this figure, the maximum acoustic input of 120 dB SPL is mapped directly to a 0 dBFS output signal. As long as the maximum acoustic input corresponds to 0 dBFS and is set at 120 dB SPL, a digital microphone always has a sensitivity of -26 dB. This is a function of the definition of sensitivity being measured at 94 dB SPL and is not a design parameter that is adjustable by changing the gain of the microphone ASIC. 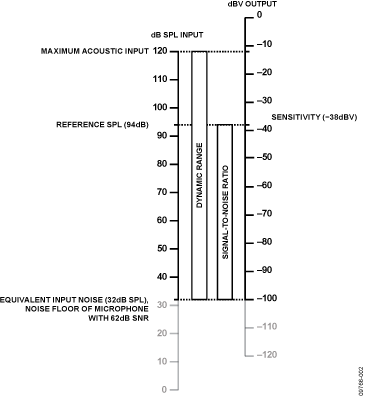 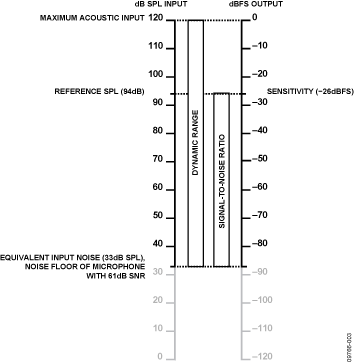 The EIN of a microphone with 62 dB SNR and 120 dB maximum acoustic input is 32 dB SPL - approximately the SPL that would be generated by a soft whisper in a quiet library at a distance of 5 meters. Figure 2 and Figure 3 show the EIN of the microphones.

The frequency response specification also includes the deviation limits from a flat response within the pass band. These values, expressed as units of pm dB, show the maximum deviation of the output signal from a nominal 0 dB level between the -3 dB points.

A microphone with a wide, flat frequency response helps in the design of systems that require natural sound and high intelligibility. 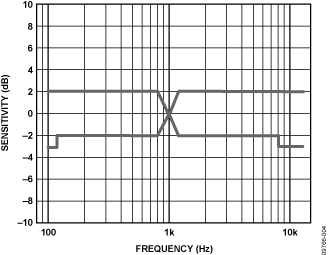 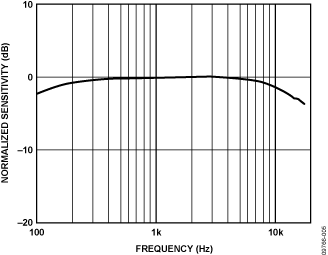 A higher THD measurement indicates a higher level of harmonics present at the output of the microphone. The THD of the MEMS microphones is calculated from the first five harmonics of the fundamental.

The input signal for this test is typically at 105 dB SPL, which is 11 dB above the reference SPL of 94 dB. THD is measured at a higher SPL than other specifications because, as the level of the acoustic input signal increases, the THD measurement typically increases as well. A rule of thumb is that the THD triples with every 10 dB increase in input level. Therefore, THD less than 3% at 105 dB SPL means that the THD will be less than 1% at 95 dB SPL.

This measurement is not to be confused with total harmonic distortion plus noise (THD + N), which measures not only the level of the harmonics but also all other contributions to noise on the outputs.

The power supply rejection ratio (PSRR) of a microphone is a measurement of its ability to reject noise present on the power supply pins from the signal output. PSRR is measured by super-imposing a 100 mV peak-to-peak sine wave at 217 Hz on the VDD pin of the microphone. The PSRR measurement shows by how many decibels this input signal is attenuated when seen at the output of the microphone. This specification is shown at 217 Hz because, in GSM phone applications, the 217 Hz switching frequency is typically a dominant source of noise on the power supply.

The data sheets for MEMS microphones also show the PSRR across the 100 Hz to 10 kHz frequency range. These microphones have excellent low frequency noise rejection (< - 70 dBV for analog microphones and < - 80 dBFS for digital microphones). As shown in Figure 6 (taken from the ADMP404 data sheet), PSRR increases to a level just under -50 dB at high frequencies. 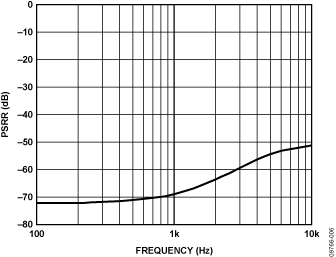 The maximum acoustic input of the Analog Devices MEMS microphones is 120 dB, which corresponds to a sound pressure level in air of 20 Pa.